The human spirit is often muddy, clouded over by misguidance and false beliefs and self-distortion. And it all-too-quickly atrophies into a hardened mold, through which we channel all our thought patterns, behaviors, and hopes. Too many Christians have been living for years in the lifeless mental rut of guilt. Guilt leads to more guilt, because it assumes the worst in ourselves. We come to expect failure, and because we expect it we find ourselves failing again and again. 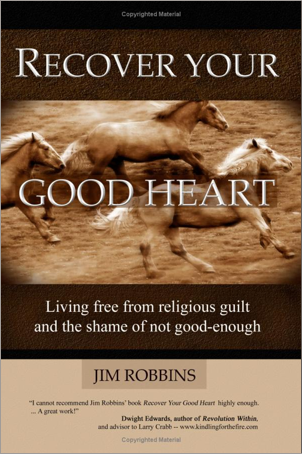 This is the cycle that Jim Robbins wants to reconstruct in his book Recover Your Good Heart: Living free from religious guilt and the shame of not-good-enough. Through this fairly short read, Jim counters some pretty deeply-entrenched theological assumptions that may be holding us back from living abundant, grace-filled lives.

The conceptual centerpiece is that once Christ has renewed our hearts through salvation, we have hearts that are good at their very core. We can trust ourselves, because Christ resides in us. We can expect ourselves to be pleasing to God in the things we say, think, and do. Gone are the days of berating ourselves for being prodigal wanderers, because we have traded the sinful nature with the beautiful nature of Christ.

But what about that which we like to somberly and religiously refer to as the old nature? Surely we know our own weaknesses; we are far from perfect. Robbins answers all the questions of the skeptics with a careful distinction of where we find our identity. We may act imperfectly out of tarnished habits, but once we have Christ present in our lives then those habits no longer make up our identity. Our true nature is good, and the sooner we believe that the sooner our thoughts and actions will follow suit.

Robbins contends that this is a necessary overhaul to our present religious system, which he explains in the following quote:

Futility is the nagging ache of religion, for religion requires goodness, yet refuses Gods gift of goodness already present in the new heart. (p. 37)

The implications of this paradigm shift are psychologically and materially immense. Though much of what Robbins says seems like simple rhetoric, a closer look reveals how little we actually we live out the idea of Christ in us. Somehow we seem to think we are adopting humility when we underestimate our spiritual capacity. According to Robbins, nothing could be further from the truth. We are part of Gods glory, and much of that glory is in the power of a transformed life.

For a few months now I have been considering the notion of the cues we take in charting out our behavior. When we hear those first few familiar chords of a worship song in church, our worship cue is triggered and we slide into the ensuing twenty minutes of elevated reverence. As we are dismissed from service an hour later, perhaps thats our cue to stop thinking about God and start thinking about football or that Sunday afternoon nap. We live most of our lives according to these established mental cues, actualizing the expectations that those cues suggest. Are we living according to the right cues? Are we expecting the best from ourselves? If we allow God to press the re-set button on our hearts, we may discover that new life-giving cues direct our way of living and believing into the abundant life Christ has promised and made available. This is what Robbins hopes for in Recover Your Good Heart.

To order Recover Your Good Heart or to read Jim Robbins’ blog, go to his website.