I learn so much in a single day here in Israel. The question on my heart before leaving the US was this: When did church become a format where we go on Sunday mornings, we sit all in a row with one person at the front of a room teaching, where we go as participants to get what we can from the five songs of worship, opening prayer, five-point sermon and closing prayer… and then rush out to try and beat the crowd to our favorite lunch spots?

It seems to me the Acts church was not that way. They came together daily, they broke bread, they fellowshipped with each other. I always imagined that they sat more in a circle in someones home and all contributed to the stories and discussions. 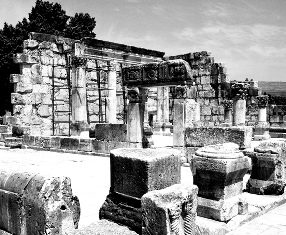 And isnt worship about turning our eyes and hearts toward God. Is our worship not supposed to be an offering to God? Our prayers like sweet incense rising to heaven. So when did it become about entertaining ourselves? Why do we complain when we did not get something out of the worship?

I came to Israel with these thoughts in mind. And the Lord has answered the desires of my heart. I visited an authentic first century Roman theater. And it is actually where the churches were held.

It was the gathering place, used more for control by the Roman empire than for any form of discipleship. Far from the model given to us in the Acts church. Do you see the resemblance to many of our modern mega-churches? The way the we sit, and the one person at the front entertaining.

In contrast, a Jewish synagogue in the days of Jesus was a square room, where they would all sit together facing one another; different people would come to the center at different times to participate in the worship and teachings. Remember, Jesus and the original disciples were Jewish and followed Jewish traditions.

So then I wondered, where did we as Christians break so far from our Jewish/Hebrew roots. Although we are not bound by the law to keep the traditions such as Shabbat and the Festivals… is He not the same God? And because we love Him, do we not choose to keep His commandments, just as Jesus did?

This may be new thinking for some of you; it was to me. But if you are open to it, hang in there, and lets explore this together. As we celebrated Passover here, I asked someone, why dont Christians celebrate it? It is clear in the Bible that Jesus Himself celebrated Passover.

Google Constantine and the Council of Nicaea to see what I mean.

Here is a little food for thought: Constantine wrote, “…it appeared an unworthy thing that in the celebration of this most holy feast we should follow the practice of the Jews, who have impiously defiled their hands with enormous sin, and are, therefore, deservedly afflicted with blindness of soul… Let us then have nothing in common with the detestable Jewish crowd; for we have received from our Saviour a different way.”

The Emperor also said: “It was, in the first place, declared improper to follow the custom of the Jews in the celebration of this holy festival, because, their hands having been stained with crime, the minds of these wretched men are necessarily blinded… Let us, then, have nothing in common with the Jews, who are our adversaries. avoiding all contact with that evil way… who, after having compassed the death of the Lord, being out of their minds, are guided not by sound reason, but by an unrestrained passion, wherever their innate madness carries them… a people so utterly depraved…

“Therefore, this irregularity must be corrected, in order that we may no more have any thing in common with those parricides and the murderers of our Lord. no single point in common with the perjury of the Jews.”

I have a desire that the world know what Christian really is. Here in Israel, most people think Christian means catholic and that the pope is our king. As I study the history of the church more and more, as I see how pagan Rome adopted christianity but simply took their pagan religion and baptized it. As i walk the Holocaust museum, and the streets of Jerusalem. I can understand, based on the worlds definition of christian why there is little unity between us.

My heart’s cry is that we stop blaming Jesus for what man as messed up. For what man has done to the religion we now call Christianity with all its divisions and allowances for varied opinions and comfort levels.

The truth is that our founder, Jesus Christ, was a Jew. That the religion outlined by Jesus via the pen of the Apostles is the only thing that we can call true Christianity. Lets stop slandering Jesus, and the name Christianity, with mistakes of man.

Kelly is originally from Texas and after 33 years of living life her way, God called her to live it His way! In 2007, God called her to the World Race and there began her heart for the Nations. Today she is still traveling the world as a full-time missionary.