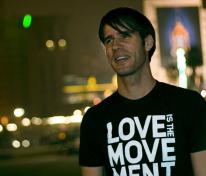 Somewhere between the random collision of Myspace bulletins and dozens of emails, Jamie Tworkowski – founder of the popular non-profit To Write Love On Her Arms – has become a friend of  Wrecked for the Ordinary. Though we’ve never met him in person, we sincerely love the guy. We’ve kept in touch with him through the craziness of traveling on Warped Tour and shared his updates with our readers. We believe in what Jamie and TWLOHA stand for, and we look forward to sharing Jamie’s touching words with the world when he gives us the opportunity. This is the third interview he’s done with us, and each time, something new and beautiful is revealed. At Wrecked we believe in the power of telling a good story – we’ve dedicated this entire website to that cause in hopes that people would be inspired, motivated, and even challenged by the stories they find here. We figured if anyone had a grip on the power of telling stories, it was Jamie. So, we asked him some questions on storytelling.

For those who may not know, tell us quickly how To Write Love On Her Arms began. 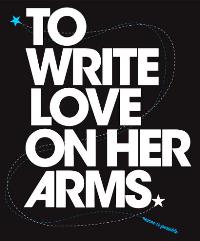 We started printing and selling these shirts to help our friend Renee. At the time, her life was in a difficult place. Addiction and depression. A history of self-injury.

There was also a suicide attempt. Renee was denied entry into a treatment center in Orlando and the written story was a glimpse at the five days that followed. I asked Renee what she thought about the possibility of telling her story. I figured she would say no but she surprised me and said some things I’ll never forget.

She said she loved the possibility that there could be a purpose for her pain, that maybe someone would relate to her story. Perhaps someone would even find hope in her story. After five days,

Renee entered treatment and I sat down and wrote two pages. We had smiled at the idea that we didn’t have the privilege of a happy ending, so we would just have be honest about everything as it was.

How has the power of story in your own life been an inspiration and motivator?

I often say that the book Blue Like Jazz by Donald Miller changed a lot of things for me. The book is basically Don telling his stories. He talks about everything – God, girls, friends, travel, writing, even politics. The book is funny at times, heartbreaking at times. 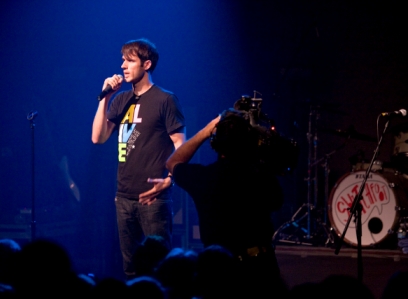 More than anything, I would say the book is honest and I think somehow it gave me permission to be honest. Don was broke, single and unknown when he wrote Blue Like Jazz. (He is still single, but it’s safe to say the other things have changed.)

Anyway, the book made me want to write, and maybe more than anything, it helped me believe that my own story was important. Also, Don talks a lot about his friends in the book, and that made me think about the characters in my story. So all of the sudden, I felt like my story mattered and I felt like the characters in my story – the relationships in my life – maybe these people were meant to be a huge part of my story.

With TWLOHA, how did you see the power of story manifested?

People sometimes ask me, “How do I start something big?” I think what they’re implying is that TWLOHA is (or has become) “big” and they want to know how that happened… My first answer is usually “I don’t know” but I think my best answer would be “Start something small. Start something true.” With TWLOHA, we simply tried to help a friend and tell her story. Everything began with a story. Fast forward a little over two years and the online audience is something like half a million people. We’ve heard from people in 40 different countries. We have a dozen interns showing up this weekend – young people from all over, choosing to spend their summer working with us. Again, all of this began with a story.

Do you attribute the success of TWLOHA to the merchandise, the music behind it, the power of Renee’s story, or all three? 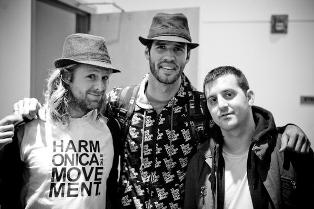 I would say it’s all of these things. One is not the enemy of the other. I would say the unique thing is that we’re trying to run in a few different circles at once – and not just run, but actually lead. So the internet is important to us – allows us to communicate with people all over the world, and it continues to be home base. But then hitting the road and meeting people face to face is important as well. Being something hopeful in a place like Warped Tour or Hot Topic is important to us. But so is challenging the Church to really love people, or speaking at a college. And then we’re trying to create T-shirts that actually mean something. We’re saying T-shirts can be better than cool – they can spark life-changing conversations, they can fund a movement, they can pay for treatment.

There’s a tension in all of this, and we’re trying to embrace the tension. We’re trying to build bridges. Overall, I think the goal is to continue to do things in a way that’s honest, hopeful, unique, creative, poetic and brave. We like all of those words.

How have the elements of story and music been a powerful tool for you when speaking in front of thousands of people? 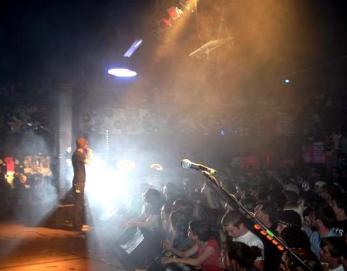 For me, the goal is simply to move people. I’m not up there to sell a shirt or an organization. The goal every night is simply to move people, to say something that meets someone where they are, to say something hopeful. Our story or my story – it only matters if it can connect with someone else’s story. Someone thinking “TWLOHA is cool” or “Jamie is cool” – that doesn’t really do much good. We’re aiming for something deeper, something that still matters the morning after.

As for music, we love the nights where our friends in bands let us borrow their stage. We think that music is powerful in it’s ability to move people, to remind us we’re alive, that it’s okay to ask questions, okay to scream… On those nights, the talk is usually brief and I don’t have songs to hide inside. So the goal is to get up there and say something that matters, to say that these issues matter because they effect people and people matter. More than anything, it’s a chance to introduce community and to say that everyone in the room has a story and every one of those stories is significant.

Have you always been naturally drawn to great stories, or did Renee’s bring something out of you that you never knew existed beforehand?

I’ve never written a lot and, even now, I wish the writing came easier. I guess my point is that I write when a story grabs me, when I run into questions I can’t answer… If it moves me, then maybe it will move someone else. I find something hopeful in that and I think that’s why I write.

If someone feels like they have a story to tell, how would you encourage them to share it? Is there any secret to telling a story? 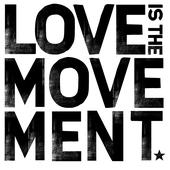 I think it all begins with the idea that our story matters – regardless of influence or attention or any of that. Our story matters because we’re part of a bigger story. Our story matters because we’ve been created to love and be loved. I think we’ll each express it differently – some will write books or blogs, some will write songs. Someone else will make a movie. I think the most important outlet, the one that applies to all of us, is community. We all need people we can do life with, people who will journey with us, people who can meet us in our questions.

As for a secret or advice for telling a story, I’ll go with this: Be honest. We all have our dreams and our fears and our questions. The tendency is to keep these things quiet because we don’t know what to do with them, or because we’re worried that other people will call us crazy. I say it matters. I say you might just find your greatest gifts in those scary places. I say it’s worth wrestling with because the world needs more people who have something to say, people who are interested in fixing things, people who are willing to dream… So be honest. It’s scary, but it’s good.

How have you found storytelling to be a more engaging method of inspiring and challenging people, as opposed to traditional methods of sermonizing or giving people a checklist of things to do in order to clean up their lives?

Yes, definitely. The checklist just never moved me, never kept my attention. And too many sermons are checklists. The exceptions (for me) are the guys who are saying real things, telling real stories that apply to real people. For me, it’s guys like Bono, Donald Miller, Rob Bell and Erwin McManus. My friend Jon Tyson in New York City is another. Guys suggesting truth and hope in a way that is relevant to the places people live. All of these guys are building bridges. The answers mean a lot more when we’re willing to build bridges back to the questions, to really meet people where they are, as they are.

As for what I want to say next, I don’t always go here because I don’t want to push people away. I think the language of it has been abused and misrepresented. But I’m in the middle of a difficult season, and the difficult seasons have a way of causing me to be honest. Maybe it’s that when things are hard, you don’t have the strength to fake it. Anyway, that’s the disclaimer. What I want to say is that, when it comes to the power of story, I suppose the best example in the history of the world would be Jesus. Jesus spent a lot of time telling stories. And perhaps God loved us so much that He sent Jesus to collide with our story, the story of humanity, the story that continues tonight – me in an apartment in Florida typing these answers, and you wherever you are, reading these words on a similar bright screen. Perhaps we’re all in this together and perhaps we’re all more loved than we’ll ever know.

Here is a short video of Renee celebrating her two years of sobriety:

Answers: Jamie is the founder of To Write Love On Her Arms, a nonprofit organization dedicated to presenting hope and finding help for people struggling with depression, addiction, self-injury and suicide. He is also a writer and lover of music. You can learn more about Jamie, tour and donation info, and To Write Love on Her Arms at their website. Visit TWLOHA on myspace.com/towriteloveonherarms and Jamie at myspace.com/jamiewrites. If interested, you can buy a TWLOHA shirt here.

Questions and edits: Jeff graduated from Illinois College, a small liberal arts school that makes the audacious claim of being the “Harvard of the Midwest.” He has a passion for music, stories, and the poor. He lives in Nashville, TN, works for Adventures in Missions, edits this silly little magazine, and loves to do new things. He’s newly married and blogs at Pilgrimage of the Heart.