When a band as fervent and fiery as Anberlin can write and perform songs that cut so deep into our human fabric, you have to wonder what that passion looks like offstage. I was honored to chat with frontman Stephen Christian for awhile and find out. I was inspired by how genuine he was as he spoke. After all, he represents some pretty fantastic success behind Anberlin that could easily translate to a sense of entitlement or at the very least a well-deserved rest. Anberlin has developed a soaring reputation that includes such accolades as a #13 hit on the Billboard charts with New Surrender, a recent appearance on Late Night with Jimmy Kimmel on ABC, extensive stage time on the Vans’ Warped Tour, and sold-out shows in eight countries.

Despite the demands of releasing Anberlins fourth album New Surrender, publishing his first novel ( The Orphaned Anythings), and starting a side acoustic music project called Anchor and Braille all within the past year, Stephen didnt feel like hed made a big enough dent in the needs of society. He and the band have always been vocal about involvement with social justice. Now he has teamed up with co-founder Sarah Freeman to begin their own humanitarian initiative called Faceless International. This movement had its genesis when the two of them took a trip to Haiti, and they knew then that it was only the beginning. Two more trips followed (to India and Guatemala), exploring life amidst the most desperate of circumstances. Faceless International is what has grown out of those trips, memories, and conversations. As Stephen explains, Were just two people trying our best. Faceless trips have more recently included other such artists as Matt from The Classic Crime and Josh and Patrick from Showbread, as well as activist Jamie Tworkowski from To Write Love On Her Arms and Clint from XXX Church.

Though the band is a huge part of Stephens life, he really seems to have hit his stride with humanitarian work, which is seeping into everything he does. The song Disappear off the new album is based on the poverty and homelessness he encountered on the streets of Los Angeles everyday driving to the studio.

Art comes from life, he says, The very people that turned their back on them are the ones that can help them.

Read more of the conversation below.
WRECKED: Anberlin has been well-associated in the past with Jamie Tworkowski’s grassroots initiative To Write Love On Her Arms. Now you have started Faceless International as your own humanitarian foundation. Can you tell us a little about this effort?

STEPHEN: Faceless is an organization that I helped co-found with my friend Sarah Freeman. It started a few years ago on a trip we took to Mano, Haiti to work with a small community. We both were greatly affected not just by the people we had the opportunity to help, but also by watching the lives change of those that came on the trip with us.

We knew that this trip could not just be a once in a lifetime humanitarian effort, thus beginning Faceless. We do not pretend to fight just one cause. For us, we want to go where the need (is) and utilize the gifts and talents that each individual person brings with them on one of our trips.
WRECKED: What made you decide to start your own project, and how are you partnering up with existing organizations committed to similar causes?

STEPHEN: The ironic part is that we took the first trip excited that we had no ties or affiliations of any kind, that we were just a group of friends excited to help change our world; then faceless started. Honestly I believe we have kept the mentality that we are still just a group of friends that still believe we can make a positive impact on the world and are not constrained by titles or positions.

Beyond Faceless I am still very active in several causes around the world. The goal of faceless was NEVER to corner the market on non-profit org’s or anything of the sort. We simply wanted people to get involved with the world around them. We don’t care WHERE people get involved, only that they simply GET INVOLVED.

WRECKED: Are there any particular stories that stand out in your mind from your travels, which solidified the need for this kind of work?

STEPHEN: Several but I think that one that hits everyone who went to the last trip to India was seeing the aftermath of girls, very young young girls, who were affected by human trafficking. It was tragic and hurt and made me personally feel so overwhelmed. In the end it only propelled what we already knew: we MUST do something, or nothing will get done. And this is one reason why faceless exists.

WRECKED: At Wrecked for the Ordinary, we are always looking for ways that artistic endeavors and social justice can complement each other rather than compete for our energy and resources. As a writer, musician, and social justice advocate, what can you say about this possibility? 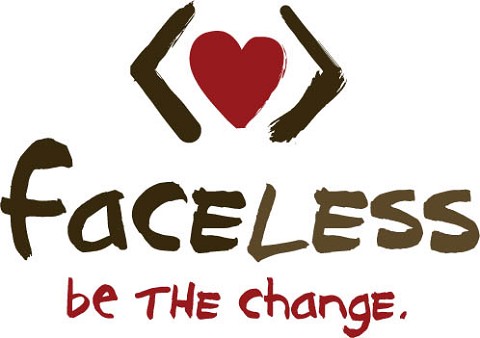 STEPHEN: Like I mentioned above we don’t care where you go to ‘complement’ each other, its that you attempt. We are very much involved in the whole picture thus we work with many different org’s such as TWLOHA and several others.

WRECKED: In the past few months, you have published your first novel, released Anberlin’s newest album, and started promoting Faceless International. Where do you find all that energy? How do you stay focused?

STEPHEN: The more intensely we feel about an idea or a goal, the more assuredly the idea, buried deep in our subconscious, will direct us along to its fulfillment’. Earl Nightingale

I must admit it is getting harder with the more and more demands that arise. PASSION. Passion is the most intense & necessary drug for a motivated soul. Everything from writing to faceless to side projects all require quite a bit of work but when everything you have been involved in is something you have only dreamed of, it is quite easy to pursue all these goals with all your energy.

Faceless International would love you to get involved. Some specific opportunities are coming up next year to accompany them to work short-term in Los Angeles, Ukraine, Guatemala, and New York City. Check out their website to learn more about the trips or find other ways to make a difference in your community and in your world.

Also, be sure to check out Stephen’s other projects: