This Book Will Change Your World: How All Things Become New
By Kevin Beck

A book promises a lot by promising to change your world.  Needless to say, this book will do it that is, if you believe what Beck says and let it affect your daily life. 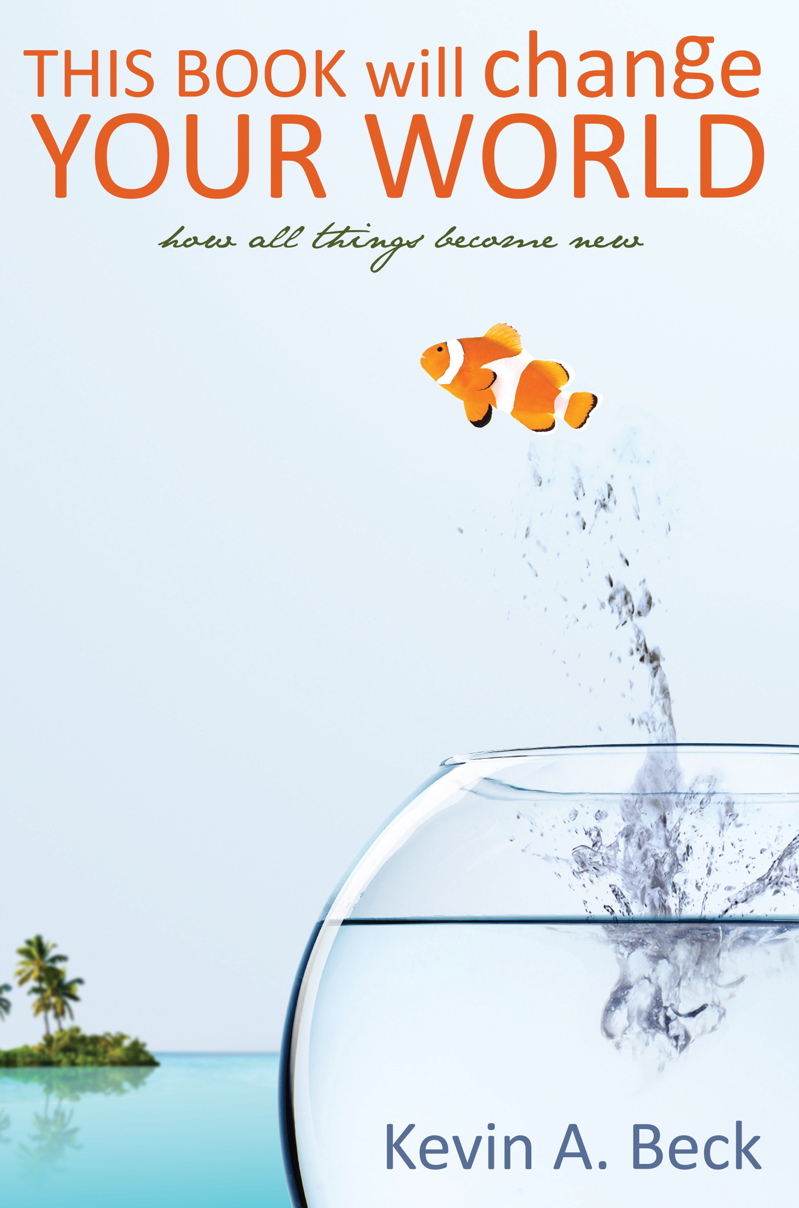 The premise of the book is that modern Christianity has, by and large, misinterpreted the Bible and has thus come to a convoluted view not just of the text itself, but subsequently of our world and God as well.  Beck even contends that it is not just North American Christians who suffer from misinterpreting the Bible, but everyone even if they do not believe in the Bible or God at all.

The majority of Beck’s treatise focuses on the ever-popular topic of end-times theology (eschatology).  Citing examples like the Left Behind series, Beck notes that the picture being painted of God is one where He is getting angrier and angrier and one day He is going to snap and bring about the end of the world.  The problem, says Beck, is that the end of the world turns out to be “good news” for but a small portion of the world’s historical population leaving most to suffer under the wrath of an angry God.  Further, given our most prevalent understandings, this all happens at some point in the indefinite future. This, he says, presents us with problems as we attempt to interpret Jesus and his earliest disciples who understood the end of “the present age” and the beginning of the “age to come” as being fulfilled in their lifetimes or shortly thereafter, but certainly no later than 70 A.D.

It is here that Beck takes the liberty, perhaps too much, to reinterpret The Greatest Story Ever Told.  For Beck, understanding the Kingdom of God as being “already, but not yet” (as espoused by some of our most prominent theologians) is a misunderstanding of what Jesus said would happen: the Kingdom of God coming into fullness in the very near future.  Instead, Beck embraces what is called Transmillenialism: the belief that the end-times prophecies of Jesus and his earliest followers have already occurred…almost 2000 years ago.  The task for modern Christians, then, turns from introducing people into a discipleship relationship with Christ to doing good in the world, through the power of the Holy Spirit, in order to bring about the New Heavens and New Earth.

The style in which this book was written seems to conflict with the overall purpose of it.  For a book like this, it would seem important to have clear structure, guiding the reader through commonly misinterpreted verses and shedding contextual light on them until the reader finally comes to that “Aha!” point where all the puzzle pieces come together.  Instead, Beck utilizes a more conversational method splicing in stories, anecdotal evidence, and cynical quips leaving the reader to wonder whether Transmillenialism should be embraced on its own merit or because the more prominent theories are getting old and worn out having fallen short in various ways.  Further, while Beck admits to his book serving as an introduction to Transmillenialism and is by no means a comprehensive guide, the book lacks the theological lifting required for a disagreeing reader to embrace it as truth.  There are also many objections to the theory that Beck seems content to leave unaddressed in his “What about…” chapter which, while it may motivate the reader to dig deeper into the theory, could also convince the reader that the theory lacks the ability to account for all of the variables.

There are two primary strengths of the book.  The first is that Beck encourages the reader, time and again, to read the story of the Bible in the way that seems most right, most true to them as they are led by the Spirit.  Far from being an affirmation of the destructive individualism that has taken its toll on the Christian faith, it is a challenge to question what it is that we are taught in our churches and by our teachers – some of which, finds little to no basis in Scripture.  Many of us grow up under denominations and church leaders that stifle honest questions and condemn those who stray from the common theology – Beck encourages the reader to see things afresh, to ask questions and, if necessary, change one’s mind.  Such encouragement is delightfully liberating.  The second strength flows from the first: this book serves as a needed critique to those end-times theories that seem to find their place more in fanciful and epic adventure-judgment stories than Scripture.  Beck identifies the flaws in these prominent theories, demonstrating how they run contradictory to Scripture and have even led to injustice, carelessness, and hate. This book can and will change your world.  Regardless of whether or not you become convinced that Transmillenialism is true, this book highlights the importance of love in all things and shedding the baggage that Christianity has piled on along the way.  Give it a try, and see just how much your world can be changed.

Don’t forget to check out the interview with author Kevin Beck!

Jesse is currently on a journey of re-learning what it means to be a disciple and it is both invigorating and terrifying. He studied to be a pastor at Vanguard University of Southern Calfornia and hopes to be in full-time ministry soon. You can read more of his thoughts at his blog, Balancing Tension.