Who is to blame?

That is the primary question that President of the Catholic League, Bill Donohue, is seeking to answer in his new book Secular Sabotage.  And the answer?  Secular liberals.  Even more, it is a calculated war they are waging in their effort to destroy religion and culture in America. 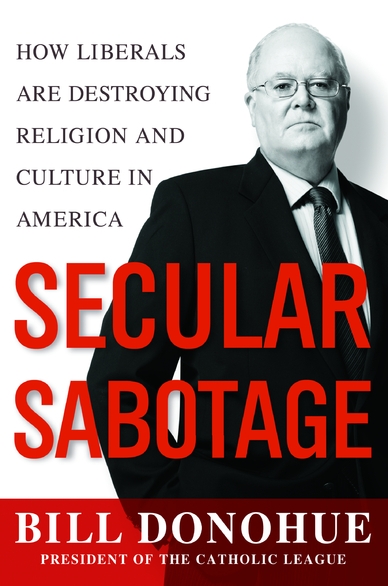 His first chapter, titled “Revenge of the Nihilists” begins by outlining scenarios ranging from a college student being threatened with expulsion because she prayed on campus for her ill professor to an artist being awarded a prize for drawing a picture of a priest performing oral sex on Jesus to a prominent minister imploring the faithful to reject Christianity.

These scenarios, claims Donohue, are not mere over-reactive possibilities, but realities that are quickly coming true due to the hell-bent secular liberals.  Instead of seeking reasonable change and tolerance, they are out to destroy those who hold firm to convictions, namely Christian religion.

And who is Donohue calling on to stop these radicals?  Conservative Christians. From here, he goes on to outline how exactly they are doing so.

They appeal to this idea called multiculturalism wherein the goal is to be sensitive to those of other cultures.  Donohue takes issue with this saying that the world is becoming increasingly less diverse by noting the growth of the few religions Christianity, Islam and Hinduism surely if only three major religions are growing, the world is becoming less diverse and thus requires less diversity.  Looks like he forgot that one’s culture is not necessarily defined or encompassed by their religion.

He further goes on to say that, at least in America, since the country was founded on Judeo-Christian values, we have no obligation to tolerate anyone but to those who subscribe to such a worldview.  He then launches into how the secular liberals have tried to sabotage Easter, Christmas, the Pledge of Allegiance, Freedom of Speech, the historical accuracy of the resurrection, etc.

A major flaw of the book, or perhaps Donohue, is that he cannot seem to exit his victim mentality.  Everything that happens, when it is not in favor of religion, is calculated, the attempt of someone with more than just bias seeking to undermine not just all religions, but Christianity — and, when he gets real specific, Catholicism (Of course he thinks this… he is the president of the Catholic League, after all). He is also the king of double standards: At one point he is offended at the fact that someone would liken conservative efforts to Hitler when only 12 pages previous, he is content to liken his enemies with the same man.

Needless to say, the book quickly becomes redundant and boring.  Who wants to read about how one guy is going to cast the first stone at everyone?

But, he is not altogether wrong.  There are those people out there who are seeking to undermine Christianity and do so with calculated efforts.  But the solution to this problem is not, as Donohue believes, a resolved effort on the part of conservative Christians to expose those people and their efforts, it is to make disciples.

And that’s what Donohue completely misses.  The issue, the problem with the state of faith in America, is not a problem “out there” as if the Church is not blame.  It is “in here” the result of poor discipleship within the church.  And that brings another miss of Donohue’s out into the open: the Church’s goal should not be to maintain a Christian or Moral America at all.  Donohue writes warning of just how wrong America has gone and how we can get it back on track, but since when was the Church’s mission “Go and make sure the land in which you live is thoroughly Christian and/or moral?”

In fact, it is that incorrect focus that has put us in this position today.  Unfortunately, Donohue is so quick to point out the specks of sawdust in everyone else’s eyes that he is unable to remove the log out of his (and the Church’s) own.

Jesse is an old soul who loves to read, write, and talk theology and believes most things are better while smoking a cigar.  You can read more of his thoughts at his blog, Now But Not Yet.