Recently, the disappearance of 4-year old Madeleine McCann made headlines around the word. Months later, the media is still following the investigation into her fate. The story even made the news in Kenya.

About the same time that Madeleine was kidnapped another little girl was murdered. Fancys sister was also four years old. She was the youngest of eight girls. I never met her, but she was the youngest sister to three girls that I have been close with, and the family is very close to my Kenyan sister’s real family. 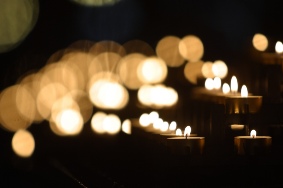 Too young to attend school, she was the only girl left at home during the school year. She was the baby the joy of the family. Fancys sister had a bright future ahead of her. Her mother was a teacher and helped many people in their small community. All of her sisters excel in school. They are leaders among their peers. They shine brightly for the future of women in Kenya. But her star glimmered only briefly before it was extinguished.

A gang of hired mercenaries young men left vulnerable by idleness attacked the familys home in the middle of the night. They gang raped Fancys sister. Her mother struggled fiercely to protect her youngest girl from the evil trying to destroy her. They brutally murdered her. The details are too gruesome to even think about, let alone write about.

Her tiny body was so mutilated that her casket was closed at the funeral. The gang used her as a tool in an attempt to extract information from her mother. They believed her father was home and wanted to know where he was hiding. Since he was not home, Fancys mother had nothing to tell them. The gang eventually raped and murdered her as well.

It is still unknown who wanted Fancys father or why. The police will probably never apprehend the person behind the crime. However, unlike Madeleines kidnapping, few people outside of Fancys sisters community know about her murder. The only coverage of the story was on a middle page of one of Kenyas three national newspapers.

What is the difference? Why do so many people follow the story of one child while the other is already forgotten to all but her immediate family? Is Fancy’s sister unimportant because she was born to a lower class family in a rural community essentially unexposed to the larger world? Is it because the country where she lived is a third world country located on the African Continent? Is one child more important than the other is?

We were children not long ago, and reality is that most of our childhoods were decent. Especially compared to the dangers most children in the world face. Are we going to stand by and let such terrors continue? How many children around the world wish someone would change the ending of their stories?

Have we grown so comfortable and complacent in our comfort zones of TV, video games, education, work, and church? Can we see no one but ourselves? If we continue to wall ourselves inside a safe and secure comfort zone, the day will come when we will look from our tower window and realize no one is left. Worse yet: we will find that the ruler of this world and enemy of our souls has laid siege to our walled fortress. He will destroy your comfort zone and in the process devour you just as he did those you ignored for the sake of your own comfort.

Wouldn’t it be better to leave your comfort zone, brave the unfamiliar and uncomfortable and save you soul, rather than live in comfort and security and lose your soul in the end? The best part is that not only will you save you soul but you will save the souls of others in the process. We can help rewrite stories so they do not have to end like Fancys sisters story.
If you liked this article, check out: Poverty of the Mall

Sarah Clark has spent the last three years in Kenya with her parents. She is an amateur journalist who desires to tell the stories of the helpless and hopeless around the world. She is currently traveling around the states with her parents and hopes to join the World Race next year.