It’s 1am; I cannot sleep. Tonight, I saw things my eyes would not accept and my heart hurt to try to understand. Tonight I went with a small group of women to the Bangkok bars, to spend time with prostitutes and prayer walk through the city. As we entered the Nana district, I felt such a heaviness and despair. Everywhere I looked, I saw white men old enough to be my father (sometimes grandfather), walking around with Thai girls (many younger than I am). Part of me wanted to glare at the white men, and part of me wanted to weep for their desperation.

We all like sheep have gone astray, each has turned to it’s own way; but the Lord has laid on Him, the iniquity of us all. (Isaiah 53:6)

We are all the same…

We met up with a few women in the mall food court to talk and pray before we went to the first bar. These are women who live here and reach out to the prostitutes everyday. They walked in and I could not believe I knew one of them. Dianna, a woman I met on a New York City mission trip two years ago walked in. After I got over the initial shock of seeing a familiar face in Thailand, I was so comforted by her presence. I was able to go with her and one other friend to the first set of bars. I was nervous for what I was about to see. It was still light outside, and not too crowded yet. We sat with two women at the first bar, Nit and Pan.

These two women were new to the bar, so they did not know very much English. Dianna translated and we talked for a bit. As I sat there with these beautiful Thai woman (both 34 years old), and both had children, my heart felt like it was sinking. They were such friendly, warm people, and as we talked to them, I forgot why they were even at the bar.

A large, middle-aged white man walked up…and one of the women left our table and sat with him at the bar. Tears started to fill my eyes as I watched her hug him, pretend to be attracted to him, and try to make small talk with him using the very little English she did know. As we continued to talk to Pan, my eyes kept shifting back to Nit. She kept looking at me, and at one point our eyes locked. I hurt for her, and her face back at me reminded me of a child who is desperate for someone to love them. Her eyes were so sad, as she hid behind her smile.

As the evening went on, I continued to see things I could not believe and hear of things I wish I never knew existed. As we walked through the streets, I saw white men of all ages, embarrassed to make eye contact with me. When they did look at me, it was like they knew why I was there…and when their eyes shifted, I saw their shame.

…She took of its fruit and ate, and she also gave some to her husband who was with her, and he ate. Then the eyes of both were opened, and they knew that they were naked. And they sewed fig leaves together and made themselves loincloths… (Genesis 3:6-7)

We are all the same…. 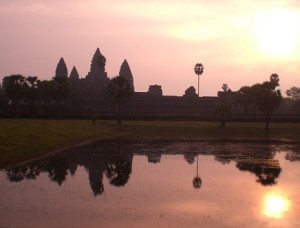 We went to the next cluster of bars and walked around. We chose a little bar and sat down. The women at this bar were fluent in English. As we sat and chatted with one of the girls, I saw a woman working there, sitting a few seats down. She smiled at me, I smiled back. I got up and went to sit next to her. She hugged me and greeted me so kindly. We conversed like we had known each other for years.

As we talked, again, I forgot why she was there. It felt like I met her at a coffee shop and we were just talking about our lives together. Her name is Tao, she’s twenty-six. She has two children who she loves very much, and her mother takes care of them while she is working at the bars three nights a week. She was married to an American man she met through prostitution when she was sixteen, but when he passed away from a heart attack six years ago, she went back to work at the bars.

She asked me questions about why I was in Thailand, what my life is like in America, and what kind of man I want to marry. I told her about my love for God and my desire for everyone to experience His love. I told her about my life in America and about my family. She kept asking me if I have ever been in love and what I want my husband to be like. I told her I have never been in love, but I want to marry a man with a kind heart, an enormous love for God, and a dedication and love for me. She nodded her head, put her hand on mine, and said, “you deserve a man like that.” I put my other hand on hers and said, “So do you, Tao.”

Her eyes looked down the the ground and I told her she has so much worth. I told her she deserved a wonderful man who is crazy about her, and she deserves to be treated with respect and honor. She lifted up her eyes and said, “maybe one day.” As we continued to talk, I saw the pain in her words. She has been abused, taken advantage of, and used for so long that she truly believes that is what she deserves. But there’s still that dream in her heart that there is something better in store for her.

We are all the same…

As we walked by more bars, I saw so many young Thai girls waiting for customers. Behind their confident eye contact, smiles, and make up, are girls who just want someone to love them. Ever since I can remember, I have dreamt about my future, wanting a wonderful husband who will love me and be a great father. This is how we are wired….to desire love. We as humans have a universal desire to love and to be loved. I started to pray for each girl I passed. The taxi ride home, I felt nauseous. I came home and went straight to bed. All I dreamt about were the faces of these girls, and all the middle-aged white men walking around. I woke up sad and angry.

So here I am, staring at this computer screen….wondering where the girls I met tonight are. Wondering if they are okay, if they are safe, and praying God will shower His love down on them tonight.
If you liked this article, check out: A Thank-You from Amanda

Colleen is from IL. This past December, she graduated from Illinois State University with a degree in English Education (grades 6-12). She is currently doing missions in Asia, but hopes to eventually pursue teaching high school in the years to come. She also loves being outdoors, hiking, running, swimming, and acting goofy.