The book unChristian by David Kinnaman and Gabe Lyons has been making waves as of late with the findings of a rather unusual research project-analyzing data concerning the perception that the average American holds of Christians. 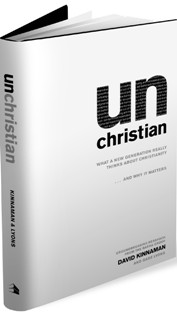 The research was compiled by David Kinnaman, president of respected research company The Barna Group. Gabe Lyons is the founder of the Fermi Project, which is a collaborative initiative to produce a positive faith-based presence in various cultural streams and to educate Christians in their responsibility for renewing culture.

What they found together through this project confirmed what most of us already suspected, albeit in vague impressions – that Christians have a distinctly negative image in the United States among young non-Christians. David describes research as a limited tool to understand the spiritual climate around us, but still more reliable for grasping the full scope of things than our anecdotes and assumptions.

Having posted a (rather controversial) review of the book here at Wrecked, we were intrigued to learn more from the authors themselves about Christianity’s image problem in America and how seriously we should take it. Read the interview with David and Gabe below.

Wrecked: You’re each spearheading different organizations right now. How did you come together, and what set this research project apart to be a book?

Gabe: I wanted to commission this type of research to better understand the perception of Christianity. We really never intended for this to become a book.

David: We really didn’t have high aspirations for creating a product, but after looking at some of the data we were wrestling with some of these questions ourselves. We decided that even if it causes a controversial conversation we’ve got to talk about this. Even though it’s a challenging book, we’re really intense about talking about our hope.

Gabe: The book did not point at specific people as examples of “the problem”…it was more trying to grapple with our own struggles and challenges, recognizing we are all imperfect.

Wrecked: What has been the response that you’ve observed?

Gabe: We’ve been humbled to see the response…This book has played a role in solidifying what (people) have been thinking about already…It’s given some the impetus to change things. We’ve been super encouraged that that’s happening, from the political world in Washington D.C., to filmmakers, to church leaders…We’re not here to rag on the church. The hope of the world is the church.

David: Many of us Christians are trying not to make it an “us vs. them” thing. Instead, we feel the tone has to start changing. Fear is a very strong tactic. But John says that perfect love casts out all fear. That fear-based perspective is not biblical. It’s been cool to hear people say that they have been touched personally. A person doesn’t have to agree with our take on the research, but I think sometimes they miss what Scripture says about why we should care about what our non-Christian friends think of us.

Wrecked: How do you field any criticism from Christians who don’t think we should care how the world perceives us?

David: I prayed that as people read it they would see something true about themselves. I can’t take credit for that, so I feel insulated against the negative reactions the book has caused. It’s not that I don’t care; I do. But I think Christians miss the point: The Gospel is supposed to be good news! When Jesus gets critiqued he doesn’t jump to the defensive. He looks at people’s hearts. You never really see him get threatened. We’re threatened by all these things. We miss how powerful the Gospel is. It means we’re playing by the world’s rules.

Gabe: Most people who read the book see there’s been a lot of effort taken to articulate why we should care…We’re not trying to be hip or trendy. We just care about Christ’s reputation in the context of our culture. If we don’t care about our perception (of being judgmental, anti-gay, proselytizers, etc.), I don’t see how you can read that and feel we shouldn’t care. That’s really humbling. Jesus in His day two thousand years ago confronted the same perceptions of those who represented God, the Pharisees. Jesus came to disrupt all that. Some people won’t understand the message of Jesus.

Wrecked: Some of the stories and statistics get pretty depressing. How did you maintain hope in the midst of this?

David: I have a great sense of confidence that God is in control. We’re changing from being a Christian-dominated society to a perspective that faith should be on the sidelines. I tend to be a realist. What are the potential things we could be doing in the future? Protestants are about half the (U.S.) population, and Catholics are about one-fourth. It’s easy to have hope in that way when you take a long, hard look at the reality of our culture. The Christian community has amazing potential!

Wrecked: What’s the next step?

David: I think we’re likely to see a gnarly backlash by many Christians who are going to have a really hard time dealing with an emerging post-Christian America…That’s going to be the challenge. There’s a portion of the Christian community that will be more pluralistic, more tolerant, and another portion will be more entrenched. You can make a mistake on both sides–becoming too tolerant or becoming too entrenched in religious ruts. For those of us in the middle we need to look at Scripture about how to work with this changing culture. Daniel was able to influence culture not only by his piety but also by his proximity to culture. I’m not offended by the world. I’m trying to be salt and light in the world.

If you liked this article, check out these:

Mariah has currently landed herself in Tucson, Arizona, where she just finished a philosophy degree. She enjoys writing almost as much as she enjoys making music. Almost. You can listen to her music on MySpace.