A few months ago the City of Houston had a huge Christian festival downtown. We took about ten of the youth from our church to see what was supposed to be the city’s greatest Christian event of all time. The idea was great: a majority of the “churches” in the City of Houston coming together as one, despite denomination and theological differences. The event tried to reach out to the various subcultures in Houston ranging from the Latin Americans to skateboarders. There was a booth, play area or program for every age group and culture.

From the very beginning, I knew it was going to be an interesting event, especially when I realized I had to wait in line to buy tickets to buy food. I hate that. While waiting in-line to buy tickets, I stood by the Xtreme Sports area and I remember hearing one of the skateboarders speak to the crowd after showing off some extreme moves. He said something to the effect of, “If you accept Jesus you’re going to heaven and if you don’t you’re going to hell. Now who wants to accept Jesus into their hearts?”

Honestly, I don’t want to be negative about the event. Jesus says, “Whoever is not for me is against me,” and I am sure that people’s lives were changed by the event. Still I just question what kind of impact the festival really had on the community. What kind of people were at this event? Would non-Christians really feel welcomed coming on their own, if not brought by a Christian friend? Would a non-Christian truly understand who God is, was, and will always be just by the words spoken and the songs sung? Would they be able to grasp the reasons why Jesus had to leave heaven and move into our neighborhood or why he had to die? Do Christians even fully understand this? 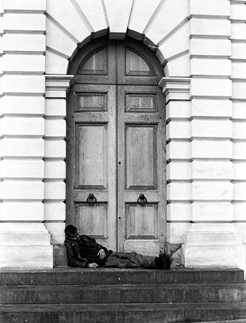 Overall, the festival was fun, some of the kids we took were positively impacted by it, and it was wonderful being led in worship by Chris Tomlin in the center of downtown. But something did not feel right. Later that night, I began to process and reflect on this festival and confess to God my judgments and criticisms. I even asked him to show me where he was, because looking back I could not find him at that event. Then I began to remember all of the people we passed by on our, at least seven-block-hike back to the car, and I began to weep when I realized where I had seen Jesus. It wasn’t at the festival, but about a mile or so away where a child was hidden under blankets sleeping in the doorway of a restaurant. I remember looking around for a parent and wanting to rescue that child, but at the same time feeling helpless and scared to do anything. Plus, I was responsible for returning the youth group kids back to their homes. Still, I was disgusted with myself and my excuses and pretty much with the entire evening. I began to realize that Jesus probably wouldn’t have gone to that festival; instead I believe he would have been out with those who did not feel welcome there. He would have been with the prostitutes, addicts, homeless and anyone else who is considered an outcast by society. I couldn’t get over the fact that even though we had invaded their neighborhoods, homes, and streets, we didn’t feel the need to welcome them, include them, or even help them.

I am sad that we, the church in Houston, missed out on an opportunity to meet the needs of these people. I believe it is important for us to gather together and worship God through singing and teaching and prayer, but what about worshipping God through our actions? I regret that we were surrounded by need, but instead of taking action and rescuing people from the hell they were in now we chose to talk about how they were doomed for another hell if they did not accept Jesus. Imagine the impact this festival could have had if all the money raised and the time planning was spent on meeting the physical needs of the people in Houston – either by providing a home, job opportunity, food, or medical help. People might have actually seen this hope that we have instead of just hearing about it.

Lindsey McDonald is currently serving as a youth ministries intern for middle school and high school students in the great city of Houston, TX. She is challenged by simple living and the fight for justice in the world. Starting in September, she will be serving with The World Race.

Interested in loving your neighbor? Check out volunteer opportunities in Houston at the many wonderful organizations doing just that. Here’s two sites to help get you started:

Star of Hope
Stand Up For Kids