A would-be President stood before a group of retired persons and promised to take care of them. They were victims and full of fear, said the Candidate. But if they would only vote correctly on Election Day, that would change. The audience watched as the speaker painted the picture: What it means to be a President to be a leader is to save your followers.

And youll find the same portrait for sale everywhere. While Democrats will protect us from economic oppression and environmental destruction, Republicans will save us from terrorist attack and rogue regimes. Elect me Leader, they all say, because I can be your Savior.

It is not just Bush who has messianic tendencies, therefore. They all do. Every President/Candidate always has. And theres a reason for it: Youve got to be a hero if you want to get elected, and there are only three roles a hero can play: Savior, Lord, or Messiah. Saviors give you life; Lords tell you how to live; Messiahs do both.

Savior-Presidents give life by preserving and extending it. They are forceful. They either do something to us (remove us from danger, feed us, discipline us, pay us) or to that which threatens us (fight it, prevent it, contain it, reverse it). Through their (legal, physical, economic, psychological) power they bring rectification.

We want a Savior-President when we are in danger or oppressed. When we are poor or weak we look to them. We ask them to use their might for right. At the other end of the spectrum we find Lord-Presidents. Rather than giving us life, they show us how to live. In following the way of life they prescribe, we make them leaders.

Some lead (from behind) by force, with a gun to your back. Others lead by inspiration. They take the first place in line so others have footprints to follow. Its the latter who are leaders or Lords in the purest, most unmixed, sense. We want a Lord-President when we feel lost or unsure. When we need decisions made we turn to them.

But there are dangers to both Saviors and Lords.

To play the Savior a President must have power over people. To change the oppressive situation in which we find ourselves, she must either change us or those who oppress us. Salvation sans (legal, economic, physical, psychological) force is impossible. The candidate-who-would-be-Savior, therefore, seeks power.

And any President who wants to lead from behind (to be a Lord by force) must do the same. But even the pure Lords those we follow by choice may not be safe. A President who leads merely by example may not have the power to act as Savior when necessary. While she herself is not threatening, she could allow others to be so by failing to exercise power.

In reality, however, there’s no such thing as a President whos just a Lord or Savior. Its the Presidents job to enforce both the laws that protect our lives and the laws that tell us how to live. Thus the Presidency is messianic, a mixture of the Lord and Savior roles.

A Messiah not only protects and frees (saves) his or her people, but leads them (is their Lord) as well. The role of Messiah combines not only life-giving but life-modeling (or ‑molding). Being a blend of two more-basic roles, the character of Messiah/President cannot be tied down. It can shift now towards the Savior-, now towards the Lord-end of the spectrum. And the Candidates self-portraits do the same.

The political game, then, is played by asking ourselves two questions: How much of the Lord- and Savior-roles do we want our President/Messiah to play? and, How much power will be necessary for her or him to play those roles? Much of the difference between Republicans and Democrats stems from these questions. But those differences are disappearing. The salvific work of a Republican President starts off more basic they would say more fundamental than that of a Democratic President. The ideal Republican President wants to make sure that we dont get killed. Let the President have enough power to save my life, but then let me live it. 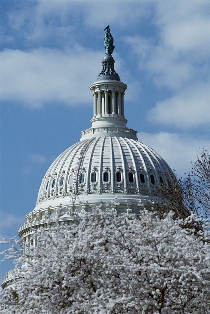 Democrats, on the other hand, see more in a President than a life-saver. Their Presidents job is not just to give life, but to provide a certain quality (or way) of life. The Democratic President, therefore, has higher-level concerns is called to higher things than his Republican counterpart.

The situation starts to change once social/religious conservatism enters the Republican mix, however. They begin to want a President concerned with saving people from some ways of life, not just from death. The Savior-role is expanded to include the lifestyle duties of a Lord/leader; it becomes messianic.

And even among non-Values Voter Republicans, the desire for leadership has grown to a fever pitch. They seek the next Reagan, having decided our Savior must also be a Lord. So Republicans now seem to fully agree with what the Democrats have always thought: We need a Messiah. And that conclusion should sound familiar to Christians. The question is, Why are even Christians spending so much energy looking for the Messiah in DC? He wasnt in the capital city back in Matthew 2, so why should He be there now?

And His body isnt on Capitol Hill either. Its spread all over. It tends to coalesce beneath steeples everywhere on Sunday mornings, which should make it relatively easy to spot. So why would we want to farm out the Messiahs work to government, as if He wasnt around?

Now that the Election Season has officially begun, its our job to decide who would play the Presidents role best. But the people who have truly mastered the imitation of the Messiah (1 Corinthians 11:1, Ephesians 5:1) wont be on the ballot. And theyll still be needing our support, long after the polls have closed.
If you liked this article check out: Politics and Religion: Dont let someone else frame the debate

Micah is a lecturer in the School of Philosophy at The Catholic University of America. His blog can be found at micahtillman.com.