WRECKED: You bring to light this idea of Juergensmeyer’s about “email ethnicities.” How do we act in a world that is quickly becoming borderless? Do we fight for no side? Is everything leveled and no claims of justice able to be made… even if tainted?

VR: It is a myth that the world is borderless. Only the rich (with rich nation’s passports and foreign bank accounts) see it that way. But, in any case, Christian identity is never defined by borders. Christians need to discipline themselves to read history not from the perspective of their ethnic or national communities but, as Dietrich Bonhoeffer put it, “from the underside” (that is, the victims of both nationalism and globalization). That is not easy, but it is easier now than in our grandparents’ day because the Church is now truly global and can correct our narrow perspectives. Also, access to information is faster. 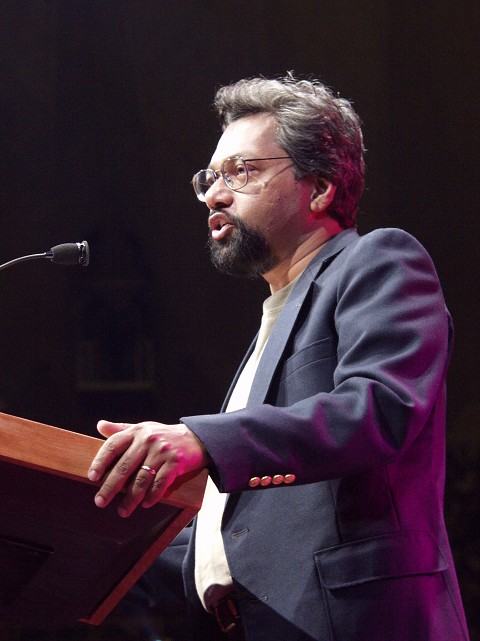 WRECKED: Why does it matter to know that the pizza was first made in Egypt and that rice came from Arab hands and chocolate was born out of South
America?

VR: It might make us less ethnocentric. We have all learned and borrowed from each other over history, not just food but ideas and technologies, which makes talk of an inevitable “clash of civilizations” very silly.

WRECKED: You state that no pagan writer has raised the question whether human beings have inherent value irrespective of social value or any other label. In contrast, you state that Christianity does see this equalization and base it on a Jewish idea of the imago dei. How does that work, when on the street it appears the Judaism and Christianity have a severe lacking in working this idea out. Also, many of your references in the human rights chapter point out the Old Testament and little of the New, other than Jesus saying to love one’s enemies, a command that comes much earlier by way of Confucius, at least. I guess, my question is what does it matter if in theory the Jews/Christians have pointed to this imago dei (which seems to be in other creation myths as well) if in fact it has not really been practiced?

VR: Frankly, I don’t know any non-biblical creation story that gives such a high view of humankind as does the Genesis story. I would like you to show me one. Anyway, I mention not only the imago dei but also the Christian doctrines of incarnation and resurrection as what have inspired people down the centuries to defend the value and equality of those human beings whom others considered worthless. I give some examples in my book, as well as confronting the failure of the Church in many periods of its history to live up to what its own foundational doctrines taught. The disobedience of the Church does not mean that we should “rubbish” all its history. Rather we continue to recover the Church’s contribution to what many secular thinkers take for granted today (until they step into societies untouched by the Christian gospel).

WRECKED: Agreed about the intensity of the Genesis story related to the “high view of humankind”… but I question whether it begins here, meaning that there seems to be ancient cultures that respect a high view of humankind as it defines itself by way of the divine. However, I concede that the Genesis narrative satisfies this need inside humanity in ways that pagan faiths are a far paler reflection.

Moving on to eugenics that you talk through in your chapter on science. I was curious if you were familiar with Chesterton’s rant against eugenics in 1922. In Eugenics and Other Evils, he says a number of things that can have wide application (a typical Chesterton trait) and one is this: “The modern world is insane, not so much because it admits the abnormal as because it cannot recover the normal.” Is this applicable to your thesis?

VR: I am not familiar with this book, but the quote sounds typically Chestertonian. I am unclear how it relates to my arguments.

WRECKED: Eugenics like so many modern ideas, value individuals not for their own sake but for their productivity – their functionality or usefulness. Certainly this is not in modernity alone. You write, “…not only does genetic selection undermine human solidarity, but it also blatantly violates the moral principle that affirms the equal worth of dignity of each human being.” In a similar vein, Chesterton argues early last century that it is the normal that we’ve neglected
and in so doing we’ve desensitized ourselves to the true value of human life.

Admittedly, your text is dense. At times I found myself wandering a bit as I read it simply due to the stacked criticism and explanation of world events and historical trajectories. What do you say about a common family, and thankfully there are more than a few of these birds in many corners of the world, who are quite naive about the plot that landed goods at their door or created enough peace or a deluge of peace that allows them to earn and keep a living? Are we to endlessly second guess and presume that what is in front of our noses hosts closets of skeletons behind it?

VR: I don’t know what “common family” you have in mind but most of my readers in the US will be college-educated or college students. They all have access to the internet, to libraries and to people from other nations and cultures not too far from where they live or work. In other words, they have access to sources of knowledge that are denied the “common family” in the country where I am living. So what’s the excuse for their continuing to be ignorant about the world? Laziness? Apathy? Fear? Surely it is the essence of citizenship in a democracy to hold accountable those who exercise power. How can we do this if we don’t question the stories they tell us? Moreover, Christian conversion- if genuine- always leads to a questioning of the status quo, a willingness to be rid of our “blinkers” and to learn how we profit through the exploitation of others, how our “peace” is secured by the torture of others, and so on.

WRECKED: You end with “The task of theology is to train… people who can improvise the gospel of Jesus Christ.” Address this idea of improvisation.

VR: I am quoting from the theologians Tom Wright and Kevin Vanhoozer who both use the metaphor of musical improvisation to describe how we communicate the gospel of Jesus Christ in a changing world. Bach and jazz virtuosos are the best exponents of this- music can better express some theological ideas than words. To improvise on a theme in music combines two thoughts: faithfulness to the original, and also (instead of mere repetition) a creative exploration of fresh expressions of the original. For instance, exploring the planetary aspects of Christ’s redemption in an age facing environmental
catastrophe would constitute an improvisation rather than a revision of the original score of the gospel.

This part two of the discussion. To read part one, click here .

Zach is director of the Matthew’s House Project.