The suburban view of the hollywood-glamorized american ghetto has been captured in the precious imaginations of kids everywhere. it has been captured in the same way that cowboys and indians were the heroes of my dad when he was ten years old in 1965. John Wayne starred in as many as five movies every year for multiple decades, so it would be fitting to say that LIl’ Wayne (Lil’ Weezy, Weezy Baby, Dwayne Michael Carter, Jr, etc.) is today’s John Wayne on hallucenogenic drugs, because he reportedly produces something like three albums every single day, in which the lyrics make little to no sense. 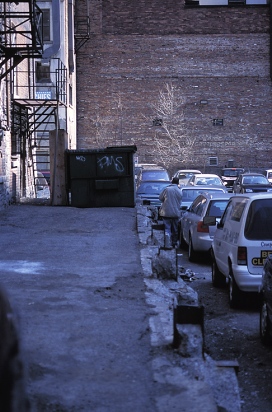 When did the ghetto become so much fun? most of middle class america didn’t even know it existed until the television news told them to make their kids throw away their N.W.A. cassettes in the late 80’s. i have one main source i want to give enormous credit to for capitalizing on the ghetto: Grand Theft Auto: San Andreas.

I absolutely despise GTA: San Andreas but I consider Terminator 2 to be the single greatest movie I have ever watched in my life. Terminator 2 was the first movie I ever remember watching where the bad guy, possibly the scariest bad guy ever, was dressed as a police officer. I had always assumed that policemen were good people, but T-1000 provided a very strong argument against that theory.

From that point on, in my young little brain it was instilled in my memory sensors forever that police officers are from the future, they want to kill people, and they can survive liquid nitrogen. Some of this fear of police also came from watching COPS, where i learned that police officers chase down people in the middle of the night and tackle them in their front yards for driving too fast. i’m assuming i am not the only little boy that took these figures as facts of reality. So when N.W.A. said “F*** the Police,” they only confirmed the anti-authoritarian suspicions i had about T-1000.

Unlike Terminator 2, which is an incredible work of special effects art (and based on fiction), Grand Theft Auto: San Andreas is the lowest level of human demoralization, based on reality. Its effects could be worse than abortion, because i have read some rational arguments for legalized abortion, but i have yet to find any rational argument that supports the act of playing Grand Theft Auto: San Andreas. In the game, the main character (you, a “thug”) are given the responsibilities and capabilities of firing on gang members of Ganton, Willow Field, Jefferson, Idlewood and East Los Santos, which seem suspiciously similiar to Compton, Willowbrook, Watts, Inglewood, and East Los Angeles, respectively. These are some of the most dangerous streets in America, actualized into a video game format where your “fictionalized” character lives and gang bangs.

San Andreas also features a city-wide riot that is intentionally similar to the 1992 Los Angeles Riots. During the 1992 Los Angeles Riots, also known as also known as the Rodney King uprising, estimates of the number of lives lost during the unrest vary between 50 and 60, with as many as 2,000 people injured. Estimates of the material damage done vary between about $800 million and $1 billion. Approximately 3,600 fires were set, destroying 1,100 buildings, with fire calls coming once every minute at some points. About 10,000 people were arrested.

In college i began to notice how popular it was amongst my mid-west friends to laugh about being “ghetto,” to “act black,” or to make jokes about gangs. My roomates and friends played hours upon hours of GTA: San Andrea. the riots in the game are hyper-realistic, everything seems convincingly thought out and constructed, but it still remains a game. When you get shot in the video game, your chest doesn’t bleed in real life and spill into your bag of doritos.

If i am to believe anything i have heard about the ghetto from friends who have lived there, or perhaps from N.W.A.’s Straight Outta Compton, the ghetto sounds like the worst place to live in America. I don’t want to live there, and I don’t want to wear a t-shirt that says I do. But if i want to, I can wake up in the morning and pretend I do live there and I shoot people for drug money so I can feed my starving children and hopefully bail my family members out of prison while trying to run from police officers with shotguns. It’s a fun game based on a real-life holocaust.

Considering that the ghetto is a world tragedy and now a glamourized american video game franchise (and clothing line fodder), I believe we should move on to make a new video game, called 9/11. The events of September 11th were also a world tragedy and has already produced a blockbuster movie in its honor, as well as sell billions of little american flags you can attatch to the roof of your car.) In the video game, the main character is a soldier who is jobless, cannot feed his family and has no human rights, but is are told by his leader that he will be with God in heaven and find dignity and nobility in the after life if he flies airplanes into important buildings on U.S. soil. Otherwise he faces imprisonment and execution or starvation. This is the plot I envision for a video game called 9/11. It will be a fantastic sequel to San Andreas, because the main character will still be a man who has been shit on by society and government and forced to do inhumane, sanity-crushing things for basic survival needs, like food, water and shelter. I am not trying to compare people who live in the ghetto with terrorists, because i don’t think the people who flew those airplanes were terrorists. I believe the leaders of their countries were, and I believe humans kill other humans out of survival instinct only, sane or insane.

With lil’ weezy still gaining momentum, I am excited for his video game to come out sometime soon, which I am assuming will be something like grand theft auto 3 mixed with halluconogenic drugs; an incredible relationship of possibilities that the grand theft auto franchise overlooked when creating their video games. If the gang members take shrooms, they would then be able to kill each other with dinosaurs and evil demons. They should be able to trip on acid and ride roller coasters through the streets while steam rolling policemen and innocent bystanders. They should float through the sky like the police helicopters hovering over the neighborhoods.

Or maybe they should ride on the back of a horse, like John Wayne, shooting those wild native americans who keep trespassing on the good white people’s territory, in the name of national security.

Blake is currently studying art, music, Spanish, media theory and rarely watches television. He currently resides in the midwest with his boxer Wrigley and his skateboard. He has been working on a rap album, two unfinished novels and thinking about organic gardening for the better half of four years. His on-going goal is to understand the world and quit smoking cigarettes. You can contact him at [email protected] .