There are some needs we have that we only discover as have them filled. My need for Christ was partially this way.  I only discovered this need as he came and filled my need. Also, my need for pizza topped with jerk-spiced shrimp.  Before I discovered this wonder on the way to Santa Cruz, California, I did not know that I needed it. 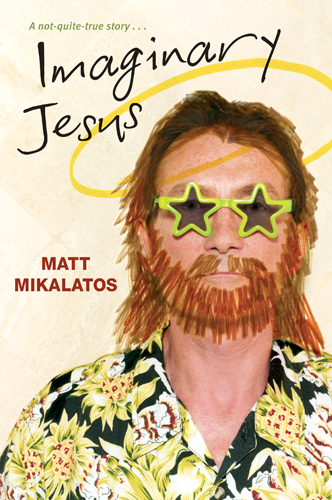 A third need that I did not know I had, until that need was filled, was a need for a grown-up version of Veggie Tales.  I raised my kids on this show. I grew to love the quirkiness that bordered on the subversive. I was struck how humor somehow lowers our defenses, leaving us in a state where we are not suspecting spiritual truth is coming our way, and so the impact of it is somehow doubled.

I didn’t realize I had this need until I found it filled in the novel Imaginary Jesus. Imaginary Jesus is the “sort-of true” story of the author Matt Mikalatos. He discovers that the Jesus he’d been spending time with in his everyday life is not the one and true Jesus of the scriptures, but an imaginary construct. He finds himself embarked on a quest chasing after imaginary Jesuses, and running away from them, and engaged in hand-to-hand combat with them, and even involved in an inner tube race with them to determine sophisticated points of theology.

Like all good literary journeys, the author’s journey becomes ours.  We are challenged to dismiss the imaginary Jesuses we have been substituting for the authentic Alpha and Omega.

In many of my favorite books, one of the feelings I am left with is, “Wow… I wish I could hear from the author about some things.”  It occurred to me that I’d be much more likely to get my questions answered if I approached Matt about an interview, rather than just approached him like a rabid fan.  I realized that acting like somebody with journalistic interests might lessen the liklihood of coming across as somebody worth taking a restraining order out against.

My ploy worked.  No restraining orders were taken out against me, and Matt answered my questions.

WRECKED:  It appears that “Imaginary Jesus” grew out of some transformations and reflections in your own life.  Would you care to describe some of the imaginary Jesuses you have followed and explain how you came to see them as the something other than the real thing?

Matt Mikalatos: I’m afraid the parade of imaginary Jesuses would be pretty long.  A few of the more difficult ones for me to get rid of were “Hollywood Jesus” who is a sort of amalgam of all the Christian cultural ideas of Jesus. You know the guy, the one who comes from all the Easter movies and flannelgraphs and simplified Jesus stories in children’s church. He’s mild and kind and never asks for anything difficult.

Then there was Legalist Jesus, who I think most of us come across at some point in our spiritual journey… the Jesus who is constantly preoccupied with the minutiae of your obedience to the Law, and invents fences to keep you as far from sin as possible. And of course, Political Jesus, who wants to take over the American government with Christians and transform the entire nation into a “Christian Nation.”

Sometimes growing out of these is a gradual process… like reading scripture and seeing Jesus go after people with a whip, or how the most common descriptions of people’s response to Jesus had to do with fear, awe, terror, wonder, and anger. Then I would have to ask myself, “When’s the last time Jesus terrified me?” Or it can happen with a sudden epiphany, of course, like when my Dad admitted to me that he belonged to the opposite political party from me (and here I thought was in the political party Jesus would choose). Looking at my Dad’s passion for Christ and realizing he belonged to the “wrong” political party shook me out of a pretty narrow idea of Jesus and politics.

WRECKED: One of the things I found most unique about it “Imaginary Jesus” was the surprising mix of humor with topics that are quite powerful and poignant but not at all humorous.  Was this an intended effect?   Is it something that you strived for or that comes naturally?

MM: Oh, it was definitely purposeful.  Juxtaposing humor with deeply serious or even tragic moments makes the humor more hilarious and the serious more powerful.  It’s not a new technique, it’s all through Shakespeare, G.K. Chesterton and a thousand other authors.  Sometimes the best way to make a serious point is with a joke.  It comes relatively easily for me as it’s sort of how I think.  Most of my friends are used to me snickering during serious speeches or crying during sitcoms.

WRECKED: There are many people who might suggest that humor is o.k. for humor’s sake, but that it doesn’t have any place in a book on something as important as following Christ.  What do you think the role of humor is in a healthy spirituality?  How might you respond to someone who considers your book irreverent or disrespectful?

MM: Well, I’m pretty sure that those sort of people aren’t going to get past the cover of the book, let alone the first chapter, where the Apostle Peter punches Jesus in the head. I think a lot of people don’t realize how much humor there is in Scripture.  As near as I can tell, the book of Jonah is a comedy.

And scripture is full of puns… in fact, the name “Beelzebub” was the Jewish people making fun of the pagan god Baal. He was called Baal Zeboub or “Lord of Heaven” and the Jewish people called him Baal Zebub (“Lord of the Flies”).  I think a lot of the prophets in scripture were comedians on some level… pointing out the inconsistencies and ridiculous actions of the community of faith. You know, “You cut down a tree and make half of it into an idol and burn the other half to keep warm.” That’s pretty funny.

As for the issue of being irreverent, I would just say that I am never, ever disrespectful about the real Jesus. I make fun of our misconceptions about Jesus, not Jesus himself.  A few people have said they feel it’s disrespectful to make fun of even a fake Jesus, but do you really think Jesus feels that way?  If we’re following a false Christ, I’m guessing Jesus is pleased if we make fun of that… if it moves us toward himself.

WRECKED: Beyond the obvious step of reading your book, what concrete recommendations do you have for someone interested in discarding their imaginary Jesuses in the name of finding the true one?  MM: Jesus is a living, breathing person, so I think there are three things we can do to get to know him that are pretty much the same as with getting to know other people.

One, we can learn about him by gathering information about him.  For a movie star we might surf the web or read a biography, and for Jesus we have the scriptures.  This is God’s autobiography, and he tells us a lot of things about himself in it.  If your Jesus doesn’t match the official biography, you need to abandon your perceptions in favor of what God says about himself.

Two, we can learn a lot about Jesus by talking to other people who know him.  If you can find a church filled with a community of people who are growing in relationship with Jesus, you’re going to learn a lot about Jesus and how to get to know him through their experience, stori
es and help.  And as much as Americans may not like it, scripture is very clear that spiritual growth happens in community in the context of the church.

Third, since Jesus is actually alive, we can learn a lot about him by interacting with him directly.  The easiest way to do this, and the hardest way to do this, is through prayer.  Anyone who is serious about getting to know Jesus should have a prayer life that is growing and developing into deeper communication with Jesus.

I know what you’re saying now, “Do you mean to say that you think the answer to knowing Jesus is ‘Read your Bible, go to church and pray? That’s so old school.'”  Well, yeah, that’s exactly what I’m saying.  I don’t think that Christian yoga or whatever other hip new thing comes out is as helpful as these things.  And I would include, incidentally, comedy novels about spiritual growth.  My book is designed to make people want to be with the real Jesus, not to try to “define” him for people. WRECKED: What can you tell us about your next book?

MM: My next book is called Night of the Living Dead Christians. It’s similar stylistically to Imaginary Jesus… it’s a comedy novel with a deeper spiritual topic at the core.  But where Imaginary Jesus is about the question “Who is the real Jesus?”, Night of the Living Dead Christians deals with the question “What does it mean to truly follow Jesus?”

A lot of Chrisitans live this disturbing half life… not quite embracing the “abundant life” and not quite embracing a worldly lifestyle. They’re a sort of disturbing mix of life and death, like zombies.  And everyone hates zombies.  Non-Christians look at them and say, “If that’s what life with Jesus is like, I don’t want it.” So it asks a lot of questions: can we truly become like Christ? How do we deal with sin in our lives? Can we live in sin and still be Christians? Can true Christians commit “sin X”? And it’s all done with the help of zombies, werewolves, mad scientists and more unbelievable creatures, like committed followers of Jesus.
WRECKED: What advice do you have for struggling writers or artists in general?  Would you care to share anything about your writing process, how you came to be published, and how you generate the ideas behind your writing?


MM: For Christians in particular, be sure you are paying attention to your craft. Don’t think of writing purely as a “tool” to communicate your message. A novel needs to be a good novel. Putting a Christian message in it doesn’t make it good. Trust that your worldview will come across in the book if you focus first and foremost on writing well. You should be reading authors who are better than you and working hard to reach their level.

A couple of the big steps in getting published came from little steps. I worked hard to get some short stories and magazine articles published, first in little journals and zines and eventually in national magazines, which made it easier to prove to agents and publishers that I could write professionally. I researched and learned how the industry works, how to write a good query letter and things like that. And then, a writer friend generously gave me the names of some agents he said I could contact. One of those agents, Wes Yoder, took the time to help me make the book something better than it was at that time, and then eventually took me on as a client. Then we started shopping the book, and we got our offers and chose one, and it was amazing!

Jeff is attempting to follow Jesus’ revolutionary call on his life as a father of three, a husband, and Special Education Teacher to behaviorally challenged Adolescents. He frequently tells his kids — much to their great annoyance — that he’d like to be a fireman when he grows up. You can read more of Jeff’s work at his blog.