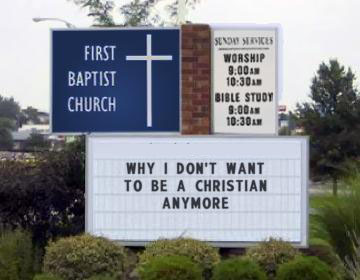 The other day at my university, there was a hellfire and brimstone preacher standing outside the student center, yelling at those passing by.  He was shouting at the top of his lungs, and some men around him were holding signs condemning people from certain walks of life.  The man was yelling about how God hates homosexuals, fornicators, etc. These people are the ones who often make me ashamed to wear the Christian name.

I decided to stop and listen to what the man had to say. It is these people who tend to give nonbelievers a bad taste in their mouth when it comes to Christianity, but I thought I would give this one a shot and see what people thought. He was roped off in a little box – I guess for protection if it got too rowdy.

After about thirty seconds of listening to this man, I wondered if we were reading the same Bible. I asked him, and sure enough, he was using the New King James. The first of his claims was that he WAS a sinner, and that Jesus saved him from sin, and so now he does NOT sin anymore. This is ludicrous, I know.

I quoted the verse in Romans 3 to him that said, “For all have sinned and fall short of the glory of God.” His response was, “Past tense! I WAS a sinner.” He says Jesus saved him FROM sin. I think this was his biggest theological problem. He was difficult to argue with in my walk between classes because he knew the Bible very well and was quoting verses verbatim off the top of his head with references. I was impressed.

The preacher also felt that he had the right to judge people in their sin. Since he does not sin anymore, he was now capable of judging sin.  You can imagine how this was handled on a college campus.  He yelled repeatedly that all girls who showed their knees and elbows were whores. He even screamed that to individual girls walking by who were just minding their own business. I then realized the reason for the ropes. He also condemned rock and rap music. A group of us proceeded to ask him for a verse for that, and he quoted the one about “being in the world, but not of the world.” Notice, it says nothing about music.

There was also no use in arguing with the man because for one, he knew his Bible very well, albeit way off target, and he did not listen when someone pointed out a flaw in his theology. Whenever someone could quiet him enough to read him a verse that contradicted his statements, he would start yelling off topic before the person could finish. He interrupted everyone who argued with him, and yet people were not allowed to interrupt him.

So, a group of friends and I tried talking to his wife who was sitting off to the side.

It was to no avail. I told her that I didn’t necessarily disagree with what her husband was doing, just how he went about doing it. I told her that I thought he was missing the main message of Jesus. Jesus wasn’t about the wrath of God and escaping Hell, though that is certainly part.

I told her that I thought the main point of Christianity is God’s love, that He loved us enough to die for us, and that her husband was missing the crucial part and painting God to be an angry old man just waiting to condemn us. She said that message is not what these “heathens” needed to hear. She said that there are lesbians, gays, all sorts of fornicators, and debauchery going on around the campus, and that what these people need to hear was not God’s love, but how they should fear God and His wrath. I had nothing else to say to her.

I was so frustrated. That’s why people are angry with Christians. People like them, people on street corners standing on soapboxes, and televangelists who use the name of God for their own gain or to condemn people they deem greater sinners than themselves.

After that whole experience, I decided that the next time someone asks me if I’m a Christian that I’ll just say no, but explain to them why. I would say no because I don’t want to be associated with those people. If you ask ten people the first thing that comes to mind when they hear the word Christian, you will get ten different answers, most of them negative.

I don’t want to be associated with that, and how can you adhere to a term that everyone thinks differently about? Maybe the person was abused by a Sunday School teacher, they met the man who condemned them on my campus, or the only Christians they know are the ones who twist Christianity to be a flag to fly to make money, or feel good about themselves. I don’t want to immediately lose my witness to them because they put me in the same group.

I felt like I had failed.  I know I have failed.  I felt like I owed the entire campus an apology. I wanted to apologize on behalf of all the Christians that those people had come into contact with in their lives.

But they didn’t.  Many of those students who were condemned that day by that preacher only had their image of Christians solidified in their minds.  That’s what I want to apologize for.  They didn’t know any better because I have been silent.  I have failed to show them God’s love, forgiveness, and mercy, while all they see is hate, hell, and a God who doesn’t like them.  That’s why I don’t want to say that I’m a Christian when someone asks me.

The preacher told me that I’m going to Hell and that God doesn’t love me because of my music taste.  I can say with the utmost confidence that I’m not.  I don’t know what I’m going to say the next time someone asks me about my religious views, but I’ll gladly explain myself.

If you liked this article, check out: I’m Done With Playing Church