Adventures In Missions (AIM), a nonprofit organization based in Gainesville, GA, launched its first Missions Photo Contest in a quest to gather photographs of ministry in action from around the globe. The purpose is to cast a vision for what God is doing in the mission field through a collection of compelling photographs that tell the stories. 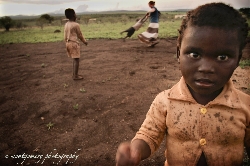 AIM founder Seth Barnes was inspired to start the Missions Photo Contest after seeing an image taken of an orphan at a care point in Nsoko, Swaziland. “I saw this photograph and was so taken by it. It captures a soul, a moment, a place and a ministry. It’s like visual poetry,” he says.

Barnes wants to share this experience with more people — and he wants more photos. “As I continued to stare at it [the photo], I thought, ‘We have so many good photographers…we need to showcase their talent.'”

The ultimate goal is to publish a book of the winning photographs that shares the stories and images of reaching out to people in need. “I think it will help cast a vision for what God is doing,” says Barnes.

Anyone is allowed to submit a photo of ministry in action for consideration in the contest. Prizes are $3,000 for first place, $1,000 for second, $500 for third, and $250 for fourth and fifth place.

Judging will happen in three rounds, and contestants must enter a photo by June 15th to be considered in the contest. For complete contest rules and submission instructions, visit the photo contest page on AIM’s website.

Adventures In Missions is an interdenominational organization that facilitates short-term mission trips throughout the world and within the United States. They organize trips for individuals, teenager through adult; and for groups, such as youth groups, college groups, and adult groups. The focus of each short-term mission trip is to raise up a generation of radically committed disciples of Jesus through experiential learning.