My husband, Joe, has been reading a bit about monastic tradition and spiritual disciplines lately. I think this is what brought on the $2 a day idea. But sometimes he just suggests crazy things that turn out to be great, so it could have been that as well. For example: moving into community with other couples. He suggested it and I thought it was a little crazy, but he was excited about it. 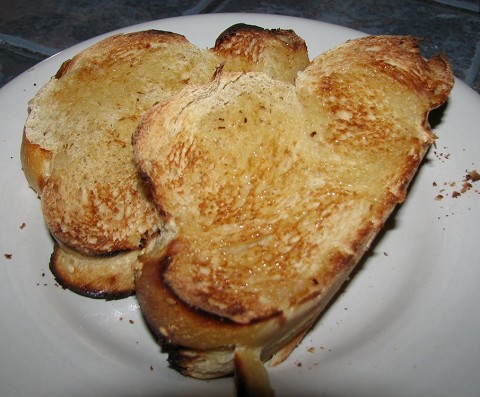 When Joe is excited about something, things usually happen kind of fast, before I’ve fully digested the idea. And before I knew it, we had moved into a house with another couple with the intention of taking in at least one more person. And it’s been awesome. We’re all stretching and growing in grace through living together (and sharing one bathroom); we lift each other up, and we cover each other’s shortfalls.
Our community has a family dinner and meeting each week, and it was at one of these that Joe suggested that we do the $2 a day experiment.The idea is to limit your food budget to $2 per day per person for a whole week. In 2009, about half the world’s population (48%) lived on less than the equivalent of $2 a day, according to USAID and the Population Reference Bureau. This includes housing, food, transportation, everything.Joe suggested that we take on the $2 a day challenge in order to enter into this experience of poverty, to express solidarity with our neighbors around the world, and to practice a time of fasting.

I admit, I was not excited about this idea to begin with.It sounded like a lot of meal planning, and my afternoon chocolate fix would certainly not fit in the budget.I wasn’t looking forward to the self denial and lack of comfort food.But I do believe that we must take the second greatest commandment seriously (Matt 22: 34-40), and actively pursue ways of loving our neighbors as ourselves.So we decided to jump in and started thinking about meals for the week.

We decided that we would not compromise on the quality of food that we buy in order to decrease our costs.We think it’s important to buy organic, fair trade, and local whenever possible, in an effort to love our neighbors who plant and harvest our food.We also decided that we would gather $56 worth of provisions (4 people x $2 x 7 days) and put them in a box, and that’s what would be available to us for the week.We weren’t going to count $2 a day exactly, knowing that if we ran out of food, we’d be doing a traditional fast for the rest of the week.Also, recognizing that our budget probably wouldn’t support three meals a day, we made some allowances for free food.A local cafe gives away their two day old bagels, which we grabbed for lunches, and we deemed the free coffee at work allowable.

Meal planning wasn’t as hard as I thought it would be. Three of the four of us are vegetarian, so eliminating expensive meat from the menu was easy.We got old fashioned oats and sugar for breakfasts and flour and yeast to make our own bread.We planned three big meals: a simple bean chili, pasta with garlic and olive oil, and rice and beans.Each of these meals made enough to feed us for two nights. We also bought eggs, butter, milk, and tea.This cost us about $44, leaving us with $12 for when the food ran out. Our meals were very plain and simple, and our portions smaller.But it was good.We started to see that we could eat very well on a very small budget.I also realized that I’ve been overlooking the goodness of simple foods.I found a new appreciation for the simple luxury of butter.But we also knew that this was only part of the experience of poverty.Only our food budget was subject to this limitation, so we were still able to spend more on our food even on this limited budget than those with whom we were trying to express support and solidarity.We live in a culture of abundance, where free food is everywhere.

The hardest part of keeping to the budget was keeping the spirit of the challenge and denying ourselves all the free food available to us, since our poorer neighbors don’t live in communities that have so much extra.Even though we were eating free bagels, if we didn’t avoid the free food at our jobs alone, we wouldn’t be experiencing much poverty at all!

Well, almost all of us refused the free office food.Bruce, Sharah’s husband, struggled with this a little more than the rest of us, and ate the food at work that was offered to him.His rationale was since it was free; he wasn’t spending anything, so he was participating in the project.Upon finding this out, I told him that if our household was a family in a third world country, he’d be the smooth talker hitting up the tourists while the rest of us worked. He agreed.

Honestly, I was mad.He ate more than everyone else to begin with.I had tried to not resent that throughout the week because, to be fair, he has a hundred pounds more to maintain than I do.When we were thinking about how to execute the project, I had been concerned with absolute equity:  I had thought that we should apportion the food into four boxes rather than one, so everyone had their own share.That way, if one person is injudicious, the rest of us wouldn’t suffer.My very graceful husband pointed out that community doesn’t work that way.Of course, he was right.But I’d been refusing food at work all week, I was hungry and cranky, and Bruce not only had been eating munchkins every day, he had been out with a friend and bought a beer.I was self righteous.I told him I had been refusing food, and he wasn’t participating.I went and tattled on him to Joe, who was trying to sleep and merely responded, “lame.”  This did not satisfy my anger.I imagine this sort of resentment and argument is common in families around food scarcity issues, but we’d never had that issue before.

The next day, Sharah, Joe, and I separately came to the conclusion that the appropriate way to interact with the beer situation was to deduct the amount spent from the remaining food budget. Again, if we were a family in a third world country and one member went and spent the food money on alcohol, we would all be affected. When we came together that evening, we questioned Bruce on the cost of the beverage and of anything else he’d bought to eat.We didn’t do it very well. He felt interrogated. He felt judged. This is certainly not what we intended through the project.He honestly felt he had been participating, and was proud of how well he’d done.He was surprised to learn he could eat smaller portions and be satisfied with simpler foods.  To be told this wasn’t good enough was a slap in the face.

We apologized.No group endeavor should be allowed to threaten the unity of our community.Again, we were stretched and grew in grace toward one another, submitting our desires and expectations to the greater good of the community.

On the last evening of our challenge week, we had some flour, an onion, some garlic, an egg, some milk, and rice left.We also had about $6, accounting for the cost of the beer.It felt like we should celebrate, so I made a dinner of flat bread with some scallions from our garden and the garlic with fried rice made with garlic, onion, and the last egg.I cheated just a little bit by using some soy-ginger dipping sauce we had leftover in the fridge.It was surprisingly good for so few ingredients.That left the last few dollars available to buy a package of Newman-Os.We demolished the whole package along with the rest of the milk immediately after dinner.I don’t think there is a better way we could have ended the week.

Our normal weekly food budget is $100. We found that we could eat pretty well on $56.We are donating the difference between our normal food budget and what we spent during the $2 a day week towards assisting hungry families.We also decided that we could easily subtract $10 from our usual $100 weekly grocery fund to set aside for a relational tithe, so that when a need comes up, we’ll have a small fund with which to meet it.If no needs arise, we will donate whatever we have saved up to a ministry we love in Bosnia.

Lesley currently serves as a Global Outreach leader at New Life Fellowship in Saratoga Springs NY, and is working towards becoming a full time missionary.  Check out her blog at www.jewelsforbih.blogspot.com.