I keep hearing God whispering in my spirit, saying : Look You must look at her. Hes telling me, Look closely into her eyes until you see a reflection of Me.

But Lord, there are so many orphans; does saving one really matter? 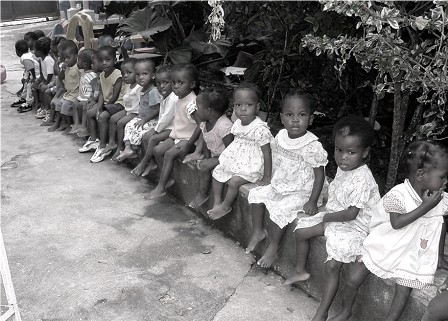 The little two-year old girl in the picture is one of 24 adoptable children at an orphanage in Liberia, Africa. Some were brought to the orphanage by their father after their mother died in childbirth. Others were brought by a desperate and impoverished mother clinging to the hope that through adoption, her children may have a chance at life. Still others were brought by neighbors or extended family members after the childs parents both died of AIDS.

Whatever the many reasons surrounding how and why the children came into the orphanage no longer matter once they are there. In an orphanage, the labels forgotten alone unwanted and cast out are the worlds banners over them. They have nothing they have no home they have no parents and they have no voice.

Not all orphans are adoptable. In fact, an estimated 90% of all orphans in the world will never be eligible for adoption due to the laws of their country. But, this little girl in Liberia is one of the fortunate ones. Liberia allows adoptions and actually makes it very easy for families to adopt one of their orphans. Liberian adoption laws are flexible and the cost is kept minimal compared to other foreign nations.

Thats one of the reasons my husband and I have decided to adopt from that country again. With our already big family of four biological children and two adopted children, we had to ask ourselves, Can we take another child? Do we have the room? Do we have the resources? How will we send all of them to college? Will we need a bigger vehicle? Can we really do this?

Ive felt this rise in me before. I felt it the first time I saw my daughter from Haiti. I felt it the first time I held my son from Liberia. I felt it when I prayed over a sick orphan last year in Swaziland. Im so lost in this little girls eyes.. the world fades away as I look at her picture and nothing matters but saving her. Nothing matters but replacing forgotten with remembered. alone with together unwanted with wanted.abandoned with chosen.

Ill never understand how it is that the poor, the fatherless, the abandoned, and the outcast actually become Jesus. Matthew 25:40 says, Whatever you have done unto one of the least of these, my brothers, you have done it to Me. So I ask, Does saving one orphaned child really matter in the big picture? After all, there are 145 million orphans worldwide. Saving one doesnt even put a dent in that statistic.

But, my God is not a God of statistics. He is personal and He is close to the poor and the orphaned. So close in fact, that He actually becomes the poor when we minister to them. Look again at Matthew 25:40. Whatever you have done unto one…

Yes, one does matter.

Lorie is a busy homeschooling mother of six children, including twins and two children who were internationally adopted one from Haiti and one from Liberia. She has taught and ministered in Bible Studies for over ten years. She and her husband Duane are founders of Reaching Hands Orphan/Adoption Ministries. Through a partnership with Childrens HopeChest, Reaching Hands Ministries enables nearly 300 impoverished African orphans to receive regular food, clothing, and education. You can visit her website at lorienewman.com.