People were frantic and running with their children. Some were screaming, some were crying and some were praying. Helen ran inside the house and saw four small children. There was no time. She had to run, but she couldnt carry them all. God forgive me, she cried and she picked up her sisters children and hid them under a blanket. Then she took her two children and ran wildly into the bush. Then she hid and silenced herself and her children. After several hours, all was silent and slowly people began to leave the bush. She took her children and 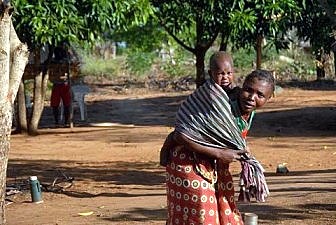 forced herself to walk toward her house. She began to shake expecting to see her sisters children dead. To her great relief, they were scared but alive. She held them so close and wept uncontrollably. The weight of leaving them almost crushed her. She thought of poisoning herself, but who would care for the children?

She wondered how God could love her. How could he forgive her? She felt like she had had no choice. She prayed all night and even in her deep despair, God comforted her. He came to her. She said she felt him holding her saying, I will never leave you. I know you did the best you could. I will protect you and the children. Depend on me.

A few days later the rebels came again. Again she chose to run with her children and to leave her sisters children hidden in the house. As she lay silent in the bush, she prayed for those children. She asked God to supernaturally protect them. Unlike the last time, she felt the peace of God even through the loud pops of gunfire and exploding bombs. Gods presence seemed to be all around her. She could feel it in her bones. When all fell silent, she went back to the house and was shocked to find the children eating. The rebels had cooked food at her place and left some for the children. They had spared her home and her sisters children. Helen fell to her knees and began to worship the great rescuer. God had promised to save her and the children and he did. That night instead of crying in despair, she sang out loud hymns of praise. As she closed her eyes, she could feel Gods presence. It was so peaceful and so loving.

A few days later, the rebels came again. Again she heard her neighbors begging for mercy before they were murdered. She heard people running and screaming. She went to grab her children and then stopped. She remembered that God had promised to protect her, so with her heart beating wildly she gathered all the children together. As they sat holding each other, Helen began to pray. Her voice was shaking, but she continued to talk to Jesus reminding him of his promise of protection.

Suddenly the door flew open as 3 rebel soldiers rushed in pointing their rifles at her head. They were all shouting at her. She put up her hands and continued to pray. It was loud and confusing. She began to beg them to spare her children. She had heard them slaughter her neighbors, so she was expecting the same. Still she continued to cling to Gods promise of protection. Then something miraculous happened. One of the rebels told her to get up, get her children and run. Immediately, she grabbed the infants and told the other two to grab hold of her skirt. Then they ran. As she looked back she saw them burning her home and everything she had. She had nothing but the clothes they were wearing, but God had kept his promise, she and her children were alive.

Helens husband never came back. The great love of her life was gone, but a new love was beginning. Over the next 20 years, Jesus has provided for Helen. He has fed her when she has had nothing to give her children. He has provided school fees in ways too miraculous to believe. He has provided places for her to live when she had nowhere to lay her head. But most of all he has never left her and he has loved her better than any man ever could.

As she stood in front of the other widows and told her story of Gods great love for her, she gushed about how good God has been to her. Then she fell to her knees and raised her hands up to heaven and began to praise God for his goodness and provision. In that moment I saw her for who she really was, a bride of the King–a Queen in Gods great kingdom with all the resources of heaven at her disposal. Queen Helen, poor in the eyes of the world, but rich in the eyes of her beloved.

Kari Miller is a 4th grade teacher who is passionate about loving Jesus and loving others. She longs to inspire others to love the least, the lost and the left out.

In previous articles, we have informed you that Kari was trying to raise $15,000 dollars to purchase land for 100 widows and their children. Thanks to you and other donors, she has now raised $16,000 and has begun negotiations.

Please pray for Kari as she has recently left the widows and returned home.