Each Sunday, millions of Christians in America gather to worship the God who commands us to love our neighbor as ourselves. We belt out praises to the God who tells us that pure and undefiled religion is caring for widows and orphans in their distress. We kneel in pious prayer before the Almighty God of the universe who describes Himself as loving, gracious, merciful, and generous. 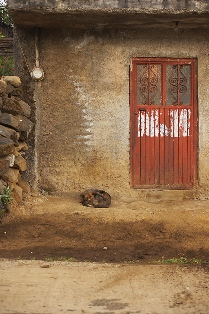 Then, we walk out the back door of the church, step into a world in need, and proceed to withhold the love, grace, and mercy thats extended to us.

We might as well give God the middle finger. Outside of a tiny minority of Christians, we have become a self-centered group of priggish snobs.

In short, we suck.

Before you pick up a rock and throw it at me, think about this: I could have used other words that arent as nice as suck. Like white-washed tombs, brood of vipers, fools, or the ever ego-inflating, Get behind me Satan! Jesus used all of these choice phrases to describe religious leaders and some of his closest of followers.

But calling someone a white-washed tomb just doesnt cut it anymore. “We suck” is a much better choice for our cultural context. Poverty sucks. Divorce sucks. And, unfortunately, some Christians suck, too.

Here are the facts:

And why wouldn’t they? Were pretty stingy with our money:

– 80 percent of the worlds evangelical wealth is in North America.
– Giving by churchgoers was higher during the Great Depression than it is today.
– Christians give an average of $13.31/week to their local church.
– Only 9 percent of born-again adults reported tithing in 2004.

And let’s take a peek in on our neighbors:

– More than 1 billion people live in absolute poverty.
– 500 million people are at the edge of starvation.
– 200 million children are being exploited as laborers.
– Half of the human beings on the planet live on less than $2/day.
– 1.5 billion people do not have enough money to buy food.

This is information that anyone can collect from the Internet, just as I did. Any reasonable person could make this simple conclusion: Most American Christians do not care about what God says in the Bible.

We pick out the scriptures we like, as if we were dining at a five-star buffet. We conveniently ignore the scriptures that talk about caring for the poor, giving away material possessions, and loving money. Scriptures like:

When Christians care about their political views, what sexual preference someone has, or their bank account more than they care about the millions of people who die in the world because they dont have five dollars to buy the medicine that would cure them, something has gone drastically wrong.

These kinds of Christians suck.

What can we do to stop sucking? I think the answer is relatively simple. It’s found in the Bible: Do not merely listen to the Word, and so deceive yourselves. Do what it says (James 1:22).

Give away material possessions to those in need, love the unlovely, take care of the widow and orphan. This is not rocket science. It just takes a heart committed to doing the things God said to do.
Want ten simple steps? You got it.

Christians, listen up: People are tired of being criticized, judged, and listening to the lip service we are so great at giving. Instead, why dont we commit to making the changes we can make?

Christianity needs a renewal of the principles that made it great. It needs to be more like Jesuscompassionate, self-sacrificial, unconditionally loving, and caring for those who are most in need.

That kind of lifestyle allowed twelve men to change the world. It will help you change yours, too.

*This article was originally published by Beliefnet.
If you liked this article, check out: Book Review: Red Letters

Tom Davis is the President of Children’s Hopechest , a mission organization bringing God’s hope and love to orphans around the world. Their work is focused in the countries of Russia, Romania, and Ukraine. HopeChest helps churches and corporations around the U.S. Adopt an orphanage and make a real difference in the lives of orphans. Tom’s favorite thing in life is being a father and a husband. He and his wife, Emily, have been married for eight years and have six children. Check out his blog .