My relationship with Christmas has come through many stages over the years. It was my favorite holiday when I was a kid. I loved everything about the season, from the cookies to the tree and decorations to carols to family gatherings to Santa Claus himself. I liked the church Christmas play and Christmas Eve candlelight service, too.

When my kids came along, I did everything I could think of to make the season special for them. Santa left clear evidence of his visits, leaving no doubt that he was real with the shocking stack of gifts, handwritten notes and other little evidences carefully planted about the place. The house was filled with Christmas music and cookies. And even in the years when I skipped church almost altogether, we made it for Christmas related activities. 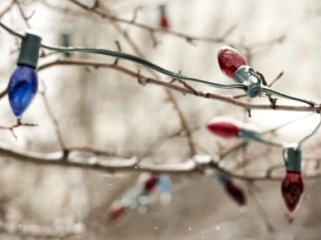 We weren’t so good about family gatherings; somewhere along the way, we decided we really wanted to spend the day quietly at home and we stopped running two or more places to see everyone on that day. After the divorce and before my ex was remarried this was even more true we couldn’t see putting the kids through split family misery, so the four of us spent Christmas together, and just for one day the kids didn’t have to choose who to spend their special time with. I treasure those memories much. I was still crazy in love with Christmas.

Then came the time I started really examining it all. Some friends who love Jesus in a very real and tangible way told me they didn’t celebrate Christmas anymore, and offered to explain further if I was interested. Overwhelmed at the very notion, I told them I’d consider their argument after Christmas and that frankly I hoped they were wrong. After the holiday, I spent several weeks examining the roots of our holiday traditions, only to learn to my chagrin that almost all of them come more or less directly from idol-worshiping practices. That same year, I began to truly understand the weight of what my daughter shared with me when she explained how Santa’s presence in her own personal history had caused her to doubt God as anything more than a mythical creation of men.

That year it was really a good thing that we lived in an apartment much too small for a tree and without space to display my Santa figurine collection. It was fine that we had no budget to bake cookies or send cards. I had spent the year struggling over Christmas, asking God with all my might to clear this up. He had quietly left it to me to examine my heart over each thing. And so Christmas Eve morning found me struggling, wrapping only one box for each of my kids and feeling absolutely certain that Christmas was ruined forever and ever. I sat on the floor in tears and laying it all out before Him.

It was not ruined, though.

That Christmas morning we opened our gifts slowly and savored our time. The greatest highlight of the day was when my son and I watched my daughter’s fiance get down on one knee and speak his proposal to my daughter eloquently from the heart. Christmas was not ruined at all.

The struggle to work it all out has continued in me since then. I have become fierce about guarding Christmas as a celebration of Christ’s birth. We have almost completely eliminated the commercial aspect of Christmas at my house; it’s not about a stack of pretty boxes anymore. Santa got kicked out of my house sometime back. I was just too mad at him for making Julia doubt God. We do celebrate on December 25, even understanding that it was chosen because it was a pagan festival date and that it was unlikely to have been the date of Christ’s birth (though some scholars say it might have been the date of His conception). After all, all days are God’s days and I like the pirate-ish notion of stealing the pagans’ day from them. We have dumped some of the traditions and kept others.

So last year, all of this came together, along with my general displeasure at Christmas shelves stocked sometime in mid-October, to bring me to a very bah-humbuggish moment at work. Feeling assaulted by the over-commercialized holiday greetings at every place of business… feeling insulted that I had to consider whether it was acceptable to refer to Christmas on a holiday closing sign at work… feeling exhausted by the conversation whirling constantly around me that made Christmas all about buying, buying and buying some more… I reacted. A man came in to pay his bill where I work, wishing me a merry Christmas as he left. I processed all of the above in an instant and stared at him, disheartened. Umm…yeah. He looked a little surprised and walked out, and ever since, I have been living down my reputation as Scrooge Supreme by the co-worker who witnessed the unloveliness of my processing.

Do I love Jesus? Oh yeah. Consider that the next time you feel angry with someone who seems Scroogey to you. Maybe they’re not as mean as they seem. Maybe they’re just working it all out.
If you liked this article, check out: A Different Kind of Christmas