Emily was crying uncontrollably, voice tremulous, body shaking in contempt of the game of dress-up the other two were playing. 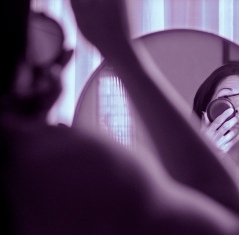 Meanwhile, I was reminding myself to double up on birth control when appropriate at any chance I would ever conceive a girl. Later I went into her room to check on her. She was hiding her face underneath a book.

“They don’t like me. They think long hair is prettier. And they only care about themselves.”

This tiny, fairy-like little blonde thing is typically mild-mannered. Until something cuts her to the core and threatens her where it hurts the most. And after reminding God that my family only has boys and I’m the only anomaly of the family and please God let’s keep it that way, I realized how quickly Satan snatches Eve from the womb. Fear of rejection is a curse inside every woman. The fear of, “They won’t like me. I’m not pretty enough,” scrapes against the very groove of our design. Note how Emily correlated the two.

I’m no tomboy. I can put on lipgloss with the best of them. But large groups of women have always made me a little nervous, to be honest. Women are so…fragile. Too many of us at once and you’re walking on eggshells just to get by. Right? Wrong. Apparently God has a sense of humor in putting me in workplaces full of only or mostly women since I’ve moved to Tucson. I’ve been faced with some deep realities about my gender. Recognize this as coming from a person who hates stereotypes (or rather hates fitting into them).

Women are supposed to be lovely. As much as I was disheartened when working in fashion retail at the entropy that causes large groups of beauty-conscious women to trade in their intellect for nail polish, I cannot deny this unrivaled component of our design. I honestly mean this in no disrespectful way.

I absolutely do not understand comments from the occasional married women who joke that they already have a man, so they no longer have to work at their appearance. I’m not dating anyone at the moment, but when I am in a relationship one of my favorite parts is having someone to dress up and be beautiful for. Beauty is not merely a means to an end (acceptance, success, etc). It is an end. And yet I love it even more when I find someone who sees me at my worst and still thinks I’m beautiful.

“He’s the only possible person in the world who can think I’m pretty right now. I haven’t slept in way too long and my lipstick has all faded off and I’m in workout clothes.” Because at that point you know that in his eyes you haven’t just achieved beauty. You are beauty. It’s part of your design. You have succeeded, and that’s not something that’s threatened. Maybe that’s what those married women mean.

Women are supposed to be more than that. This is probably where I have the most difficult time with stereotypes of women. I watch the sorority-type girls. I get discouraged that I could never keep up with them. And I get annoyed that it’s such a waste. So many women fear the full extent of their potential that they settle for the thing they know is a safe bet. Something they won’t fail at. But Eve has lost her way. We’re painting our faces for sex when we should be painting them for war. We’re created to bring forth life–what the name “Eve” means–but ushering in life is always accompanied by pain, sacrifice, and a great deal of energy spent on behalf of another. But Eve has lost her way, spending her energy on herself and afraid of her enormous calling. Women underestimate themselves, and that’s because…

A woman’s self-worth always begins in limbo. And often never comes out. I’ve seen so many lives damages, sometimes irrevocably, through the loss ofa woman’s confidence. A woman needs to matter, and all too often we take our cues from vacillating sources. Unfortunately, women can tend towards victimization. Blaming our heart’s condition on the ways the world has rejected us is an easier pill to swallow than “I guess I just don’t have what it takes.” Thinking these are her only two options, a woman will by default tend towards either taking her revenge on the world or accepting the actual or self-perceived lies about her person-hood. And both kill. A woman with no self-confidence has little hope of making the impact on the world that she was intended to have. She feels too threatened.

And it’s here that we face a fine tightrope if we’re to reclaim our person-hood. To not mourn the places of our hearts that have been hurt, rejected, or simply unfulfilled is to belittle the worth of our own hearts and desires. But not to move beyond that is to paralyze us from our potential. Every woman has been hurt in one way or another. But every woman has a choice. She is both vulnerable and powerful. But together make her lovely.

So what’s the take-home message? Hurt over your hurts. Celebrate yourself. And then get over yourself. You’ve got a world to save.

Mariah has currently landed herself in Tucson, Arizona, where she’s finishing a philosophy degree.She enjoys writing almost as she enjoys making music. Almost. You can visit her on Myspace at www.myspace.com/mariahsecrestmusic.