He stood in the shower, his left hand firmly grasped around the rusted showerhead, his head hung over his chest, eyes closed. The hot water poured over him like a monsoon gale over a peninsula, but he did not stir. The steam rose from the puddle at his feet, curling around his muscular legs and powerful chest, filling the small white room, then spilling out the window he had cracked open. Finally he moved, his head slowly lifting, then his whole body tensing, his hand gripping the faucet as if it was a solitary hold that was the only thing left which kept him from falling into eternity. 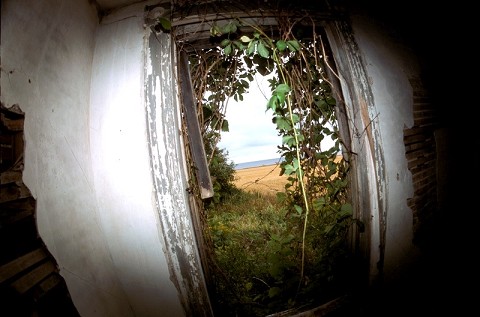 He opened his eyes, his eyelids flicking small drops of water away from his face that joined the spray of water that washed over him. Gradually his mind cleared, and he caused his left hand to release its hold and turn the small dial by his knees which stopped the stream of luxurious warmth.

Stepping from the porcelain casket that had threatened to swallow him into its comfort, he shook the water from his body, simultaneously shaking the weariness from his mind and the doubt from his soul. Looking into the mirror, he lifted his drowsy eyebrows, only to be stared back by the steam that had fogged the looking glass from corner to corner.

Drying away the steam with the corner of my towel, I finally found my reflection, and the tired blue eyes, the dripping red hair, and the soft jaw that returned my blank stare replaced all my dreams. The muscular legs were changed to my own lanky legs, and the powerful torso became the pale, scrawny upper body that I knew resided below my neck. I sighed a long, drawn out sigh then watched as the steam quickly invaded the mirror once more, reinstating its command. I closed my eyes and imagined myself falling, slowly and peacefully, down, down, down and suddenly I had to put my hand against the wall and grab onto the sink as my head started to fall forward, carrying my body with it.

I pulled myself straight up, opening my eyes just long enough to confirm my body’s angle to the floor. I slapped myself in the face, in an attempt to wake myself up, and was rewarded with a crisp smack!’ sound. It had done nothing to remove the shadows from behind my eyelids, but I smacked my face again, just for the sound. Smack!’  I dried, dressed, and departed, walking out the small door of my apartment with my Eastsport backpack slung over one shoulder, my right hand pushing a green, military style hat over my soggy hair.

I stepped off the top step of the steep, narrow stairway that leads to the front door of my apartment building, and when I hit the second step my backpack slapped into my back, propelling me forward. I descended the stairs like some human slinky, my backpack pushing me off every step to the next. I reached the bottom of the steps and swung open the huge front door, stepping out onto the porch then down onto the sidewalk. My face met the frosty cold air with surprise, and I quickly zipped my coat up the remaining few inches. The coldness was just a few degrees above being bitter, and it quickly opened my eyes and immediately put a spring in my step.

The one thing I really appreciate the winter is that the cold wakes you up; during the summer, I constantly feel drowsy, and the heat makes me want to just sprawl out on the floor of my room and do nothing. When it’s cold, you have no choice but to keep moving, keep your blood circulating. So when I stepped outside, I became fully awake, fully aware, I picked up my feet and walked like I meant it, I suddenly had purpose: keeping myself warm.

Early morning in the city is nowhere close to what it is out in the countryside. In the country, the entire ground sparkles with dew, the moist brown earth looks soft and inviting, the trees are full of color, and unseen birds celebrate the rising of the sun with beautiful song. Over a far horizon, the sun peeks out its warm and welcoming face, and you can practically hear the angels singing out in bright and joyous voices, until God hits the snooze button on the Archangel Michael’s head and they become peaceful once more. On the other hand, in the city the sidewalk is bare and dry, the dirt is a dirty grey, clumps of snow and gravel litter the side of the road, and 18 wheelers drive through on their way to an early delivery.

Short Mexican men are picking up newspapers and unlocking the front doors to the restaurants they open along Broadway, while skinny young guys covered in tattoos walk the sidewalk picking up trash and emptying all the garbage barrels that are full of Caroline Street’s beer bottles and pizza boxes from the night  before. A bird can be heard here or there, and somewhere a young girl is crying, but all other noise is drowned out by an air horn being blown obnoxiously on Route 50.

Something about waking up early and walking Broadway early on this particular morning changed the way I looked at the city of Saratoga. The incessant noise didn’t give me a headache, the Mexicans didn’t cause me to grumble and moan about illegal immigration, and the garbage littering the street didn’t make me want to cry because of the immorality of Caroline’s regulars. Instead, I saw a beauty in all of it, a realization that all of it was God’s creation.

As I kicked along a piece of iced dirt, I was amazed at the beauty of sidewalk, of gravel and of the dirty brick buildings that poured smoke from aluminum chimneys. A trucker suddenly came to a halt at one of the countless red lights, and his hydraulic brakes squealed and screeched in dismay, my soul rejoicing at the noise as I thought of how God had created all sound, and this was as beautiful as choruses sung by shining, winged beings. My wet hair had begun to freeze in place, my eyelids were permanently open, not a speck of drowsiness left, and I thanked God because I didn’t want to miss a moment of His beauty.

God is present at all places, and His splendor is apparent in every created thing, when we only take the time to look for it. Rolling hills, bushy green trees, dewy grass and brightly colored birds are perhaps easier to see glory in, but I think it’s less because God is more present in the countryside, and more that it’s just that we tend to be more amazed at what is new to us, what is unfamiliar. A farmer grows tired of waking every day to the same pastures, the same cows and chickens, the same sunrise he’s seen a thousand times, but when he walks into a city he is amazed as his gaze rises to stare at the towering skyscrapers and buildings larger than entire cornfields. God is the same God in the city as He is in the country, it’s only the eyes we see Him through that make a difference.

I can think of no more wonderful experience than to wake every day with new eyes, to be amazed with every tiny detail of an environment or to be enamored with every word a friend speaks. Rather I find that I am continuously bored by my surroundings, because I have seen them all so many times before. I wake to the same tiny, cold room every morning, emerging from my room to the same four guys I have been living with for months, walking the same streets to the same job with the same coworkers in the same city I have been in since as long as my mind seems to care to remember.

Everything that I was once passionate about I now find uninteresting, and everything I was once amazed by is ordinary, everything that I used to enjoy has become tedious and monotonous. And if I find this dismaying now, how much worse will it be when I am married and wake some morning to look at the woman beside me and wonder “Why the hell did I ever marry this person?” Walk to the kitchen, wondering “How did I ever come to a point where I decided to buy this house? Why did I decide to have these abominable creatures called kids? Why am I working at this job that I cannot now escape from, because I ha
ve a family to support?” I can only hope that when I come to this point, I will turn to God’s Word for encouragement, that I will look to the Body of Christ for love.

Basically the only guidance I can offer if you have come to a point like this in your life are the two things I just listed: read God’s word for encouragement, and spend time with the Body of Christ, the church, to receive the love we as humans need to survive. Pray about it, ask God to give you new eyes, to “open the eyes of your heart.” In addition to this, I would tell you to change things up a little bit. Break your routine, quit a habit, do something you’ve never done before. I become extremely restless pretty often, which is I why do things like move out of my parents home at 17, quit my job to hitch-hike across the East coast, or even just stupid things like walk Saratoga for hours during the middle of the night between long shifts at work.

But you don’t have to be stupid to break out of a monotony; you can do something as simple as waking up a few hours earlier than usual and going for a walk, meeting a friend for coffee or a game of chess and a good long talk, starting a journal and writing your thoughts out. When you are in a situation you face every day that there is no escaping from, think about it in a  new way, look for details you haven’t noticed before, put time and effort into learning something new about the person you are with. Not that it will be easy; it is extremely difficult, and before you can even start, you have to break past all your own inhibitions and obstinacy. But, in the long run, it is well worth it.

Andrew currently resides in Saratoga Springs, NY where he lives in a small community called the Ragamuffin’s Rest with three other Christian guys. He is an avid writer, photographer and film-maker, but is currently paying the bills by working as a prep chef in a cafe.