One year. One backpack. 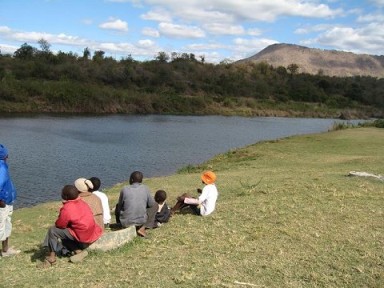 I about fell off my chair the first time I read the packing suggestions for the World Race. I was expected to bring four skirts, four pants, and eight shirts for an entire year? I remember looking with disdain at my closet, wondering how I would manage.

I had been living with so much more than I need my whole life. The idea of simple living scared me. I mean, what if I ran out of shampoo? Now that we are one month into the race, I have realized that eight outfits are more than enough. I have had something to wear every day.

I havent run out of shampoo yet, but when I do, I will either buy or borrow what I need. Maybe I will have to go several days without washing my hair. I am living with just enough, and I am trusting the God of the universe, the Lord of my life, to provide for my needs.

The Bible tells the account of how the Israelites hung out in the desert for forty years. At the beginning of their wandering, they complained to their leaders because they were hungry. This was Gods reply: I will rain down bread from heaven for you (Exodus 16:4). They referred to this heavenly bread as “manna.”

The only rule was to only gather enough for each day (On the sixth day, the Israelites were instructed to gather enough manna for two days, as they were to rest on the Sabbath.). When the Israelites tried to hoard extra manna, it would rot. They could not live beyond their necessity, and they had to trust the Lord to provide.

Shane Claiborne refers to this concept as the “theology of enough.” It is the idea that “if we take only what we need, there will be enough” ( Irresistible Revolution, pp. 169-172). I have never considered myself rich, but I have always had more than I needed, and I have never gone hungry. There are enough resources on the earth to feed every human being, but thirty-five thousand children starve to death every day.

Over the years, I have explained this human tragedy as a failure of global economic and political systems, and by so doing removed any hint of personal responsibility. Motivated by guilt, I have appeased my conscience by giving money to charity. By living with the poor all over the world, I am just learning to be motivated by love. Yet, even while living with the poor, residue from extravagant living remains, as we sleep at night in $200 tents. I ask myself one question:

What if the sum of my possessions equaled only my necessity and not my extravagance?

Simple living has proven much less challenging and much more fulfilling than I had first thought. As a community, we have had to sacrifice, share, and trust. I think that by living simply, we can help ensure that there will be something left for the starving children, and we will be immensely blessed.

Mallorie Miller grew up in Cambridge, Ohio with her parents, older brother, and loyal, blind guard dog Toby. She is a graduate of Ashland University in Ashland, Ohio and is currently in Belen, Costa Rica with a traveling church-planting ministry called the World Race.