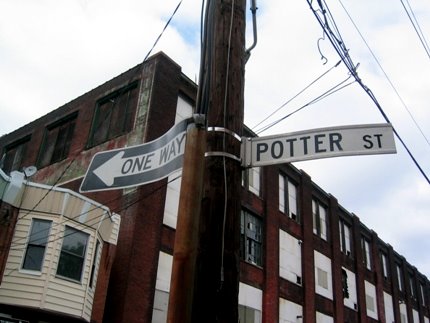 To see such beauty and light in the forgotten places of the world, I learned why Shane Claiborne calls Philadelphia his Calcutta. Though my eyes have yet to see the slums of such a city, my heart began to see.

As I arrived on Potter Street in the Kensington district of Philly, I was overwhelmed. The kids running up and down the streets, sidewalk chalk and the most beautiful wall murals everywhere. Liquor stores, arguments, shoes hung on power lines, and there, in the midst, was the Simple Way.

Both renovated abandoned houses cover both corners of the block giving it a big hug, or so it seemed to me. Gardens were being planted within the lots of some of the abandoned homes. Each house was provided with their own pots of flowers and on them, words such as peace, love, joy, and many of those beautiful fruits.

I sat upstairs and met Shane again as he was leaving to run some errands. As I became still, I looked at the amazing art of the neighborhood kids and read a loud, colorful banner that said, “The truth will not be televised! Lies! Lies! Lies!” A sign above the door to their kitchen reads, “Today… small things, with great love.” Posters of Mother Teresa, Oscar Romero, Che Guevera, Gandhi and Dr. King line the walls of “the gathering.” They were radical lovers with simple messages – that love is the revolution. A beautiful iron butterfly hangs on the wall with the word, Namaste within its wings, reminding me of my future journey to Calcutta, India.

You could hear the humming of the local “el” train that runs through occasionally. You could watch the pigeons waddling in and out of abandoned warehouse windows – a picture worth a thousand words, if only I knew such adjectives.

I was there at the Schools of Conversation for the New Monasticism, which was a gathering designed to help teach about monasticism and to live like ordinary radicals among some of the forgotten places of our cities in community.

We went by to visit Sister Margaret at the New Jerusalem community. Mostly made up of Sister Margaret and former addicts to drugs and alcohol. We prayed while Jill, a recovering addict sang a sweet spiritual that was full of such sadness, melancholy and joy. It gave me a lump in my throat as her voice shook my soul. We sat with Ernie, who was celebrating his 100th day of sobriety. We listened to Bob talk about how he likes to “shut down” and listen to the world.

We have great vulnerability in the deserts, Sister Margaret reminded us.

We saw gardens planted by hands that used to sell drugs, and knew of such great pain. Our brothers and sisters of New Jerusalem were not afraid to share their wounds. We were reminded that Christ did not hide His wounds; neither should we.

We learn about bringing Heaven to earth in tiny, tangible ways.

We visited the beautiful gardens of Camden House in New Jersey. 60% of the kids growing up there develop asthma due to the air pollution. Smoke stacks from burning garbage and scrap metal contrast against a fiery red sunset. The stars then come out to dazzle our little eyes that see such enormous things.

The smell of the local sewage plant fills the air, but our conversation and laughter is loud enough to ignore its existence. We made smores in a homemade bread oven and sang old T.V. show theme songs, which Shane brought up a good point that shows these days lack good intro songs.

Shane and the simples are much like us. They try to live simply, so others can simply live. 90% of the food I ate this past weekend was from dumpster diving. The food was incredible. Fresh veggies, all thrown away, free for the taking, and all cooked with love that always makes it taste better.

To feel uncomfortable in the moments that used to bring me comfort, and to some of us who have forgotten what it’s like to eat from a garden. We cant swim in our lakes and rivers anymore with fearing of sickness, nor can we eat the fish in the waters because of high mercury level. We come to find that not only is another world possible, but another world is necessary.

There is beauty in the brokenness. Its in the silent moments that the world screams for you to notice her, to feel her breathing.

A diverse crowd we were; college students learning to do life another way, travelers from Canada looking to start communities, married couples and pastors alike, craving the flesh of community. We shared such beautiful moments together discussing life. There were such obvious dichotomies of culture, and background, but one common goal of togetherness.

I left Philly with a full heart knowing that Id be back, someday.
Keep dreaming.
Keep thinking.

Fail forward they would tell us.

As for today – small things, with great love.

Josh Casper is a junior at the University of Southern Mississippi who participates in various church ministries and community projects. Josh is currently majoring in Psychology and hopes to someday use it in counseling. He is currently involved in raising awareness around his campus with organizations such as Invisible Children.