Last night the temperature dropped and I was barely warm enough in my sleeping bag, liner, and tent. As we ate breakfast, we complained about the cool temperatures. I had a wonderful morning of mending on the sewing machine and a swim across the lake and back. Jaco spent the morning gathering blankets, straw mats, sheets, towels, and food to take out to one of the groups of orphans. A few of us loaded the car with the supplies then hopped in the car for a forty-five minute ride out into the bush. When I say “out into the bush,” picture a sandy dirt road surrounded by nothing by trees and shrubs. The roads are so bumpy and curvy that it basically it feels like off-riding. 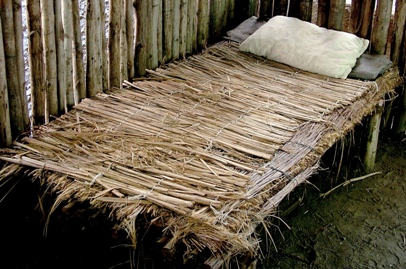 We got the privilege of passing out the straw sleeping mats and towels to each child. Some of the children gave huge smiles and thanks, while others would not even look up. There were not enough blankets to go around, but we placed the pile that we did have in the center with a big box of clothes. At this point I asked what the children had been sleeping on before we brought the supplies. Jaco informed us that they usually just sleep on the dirt under the tarp. He said he woke up three times last night due to the cold and thought of the orphans sleeping on the dirt in a T-shirts and shorts. That is why he decided to take action today. I can’t imagine how they would be able to sleep in such cold.

Two women stood to the side of the orphans with big smiles and continual phrases of thank you. Jaco informed us that the women work with the orphans everyday, but do not receive a salary. They take turns spending the night with the children even though they have children and homes of their own. We gave the women four fish that were well over two feet long. While we were there the women chopped away at the fish gutting them and preparing them for the children. Before the cyclone the orphans were living in the bush with no shelter. The good thing about the cyclone is that the children now live together under a Unicef tarp rather than living in the open bush. Most of the children have parents that died or left them to fend for themselves. One little boy when asked where his mother and father are responded, “I don’t have a mother or a father.”

While Jaco was discussing the conditions of the children, they sat stealing occasional glances of us. One little girl standing near me timidly scooted closer to sit down beside my feet. She slowly and gently used her fingers to wipe the red dirt and dust off of my toe-nails. She brushed every grain of sand off of my nails then went on to clean the rest of my feet. I have had my feet washed by friends, mentors, and supervisors to demonstrate their willingness to serve me. I have often said that this exercise is lost on me. I know what they are trying to communicate, but when my feet were clean and they used a pan of water it did not seem like a big sacrifice. My feet were filthy as I had not showered in days and have been walking through red dirt and dirty sand. The little girl humbled me with her simple yet symbolic gesture of service. I bent down and mirrored her actions by wiping the dust off of her toes and feet. She looked into my eyes as a coy smile spread across her face.

As we pulled away from the orphans waving goodbye, I felt a little better about leaving them knowing that they would sleep in the warmth of the blankets, clothes, and full bellies.

If you liked this article, check out: Climbing Out of the Pit

Annie Bower, of Somerset, PA, is currently backpacking the globe. You can read more of her stories here.