Ever since I can remember I have been trained to look in the mirror and hate what I see. The media, culture, society in general told me that how I looked was unacceptable, negative, and, well, not pretty. I felt like trash. I felt like Gods big mistake. I was worthless.

Typical teenage storythats what this is, right? Insecure girl hates her life because she was always bigger than the other kids. She had health problems and could never pass gym class. The other girls told her she wasnt pretty and could never be popular. In middle school, those are the some of the most devastating things to experience. But it all changed in 8th grade. 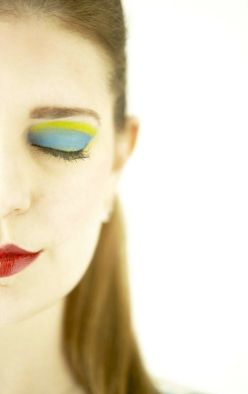 The parents divorced two years before everything changed which simply added to the pain I already had to deal with. I contemplated suicide, self-mutilation, and other methods to either get peoples attentionto tell them, Im not okay!!or simply just end it altogether.

In the form of my best friend at the time HE reached out and grabbed my heart. My best friend invited me to her youth group for a party on a warm April night. It was like a racing party where you could participate in one of the races based on what you brought to race with. As the rollerblading race began I was confident and excited. When I came in last place I was reminded of the demon that haunted me my whole life. I left the party with no more hope than I had come with and no desire to return for more humiliation.

At the beginning of that warm April evening, I was required to fill out an information card. I did this without thinking that such a simple act would be the catalyst to a life-changing relationship. Later I found out the information card enabled the church where the youth group was held to send me postcards and fliers for their events and small groups. The following fall I joined one of these small groups and would forever be changed.

The leader, her name was Lori, was really nice. She had that motherly nature about her (which made sense since she had two sons of her own) that I couldnt see in my own mom at the time. I was drawn to that family because every time I entered their home for small group I could detect an air of happiness just bursting in the house. It was an unfamiliar thing to me. I attended the group weekly for three years and would appear at random youth group events like all-nighters and parties. Throughout the first year, I made enough friends to want to start attending regularly and so I did. The fall of my first year at the group I attended two events that defined and began my walk with Christ.

The first of these events was a Silver Ring Thing show at the church. This event was an abstinence program performed in a MTV format with lights, music, comedy, videos, skits, and then talks. It mainly brought the message of abstinence, but to me it brought a message of self-worth and recovery. They told me I was worth waiting for and God created me for someone as He created someone for me.

As I sat there in the sanctuary seata place I had previously only found myself in on Christmas and EasterI was changed. I left the show without accepting Christ, but choosing to wear a silver ring which symbolized my commitment to abstinence and to my future husband. I did this because, for me, it meant living differently and thinking about my life in a way that healed old wounds and silenced old demons. I still deal with those things from time to time, but thats where the second event becomes so important.

The second event was a retreat with the youth group. We went to a camp in the middle of November and played in the mudyes, I said played in the mud. While this act seemed totally ridiculous it was the major fun event of the weekend. The retreat also consisted of worship and a speaker two to three times a day. On Saturday night we got an opportunity to have 20 minutes of silence outside in the dark in the freezing weather. Once again, while this seems like a totally ridiculous act it was a time where God really latched on to my heart and changed me. I accepted Christ that night and have been living a different life ever since.

Now when I deal with those old demons that I mentioned or I feel the pain of those old wounds, I go to God, not my depressing thinking, for comfort. I go to the support system at my church that God has given me. I am a stronger person. Before any of this happened, I was so weak that weak is an understatement. I was wrecked by the ordinary thinking and actions of the culture, society, and the media. I was hurt by my ordinary life. Then I was wrecked from a depressed lifestyle by simple actions inspired by God.

Some would say I now have a bleeding heart for those who struggle like I do/did, but in all truthfulness I do. The pain I felt, I pray is never felt by anyone ever. While I know only God can control that, I feel called to live above the snares and judgments of this world. I have self-worth and value. I dont think I am worthless because I dont fit into the standard set by a world that is, in all reality, hurting as much as I did.

I believe I have been wrecked for the ordinary because God showed me that what the world sees as faults I use to empower myself. I live a happier life because of that. I live to tell the world that they too can be freed of the same pain.

Sammi , age 17, is currently taking classes atLa RocheCollege in Pittsburgh as a college in high school student. Next fall she will be a freshman at Taylor University where she will pursue a dual degree in Communications and Christian Education. She works for the Silver Ring Thing and at Target as a cashier.