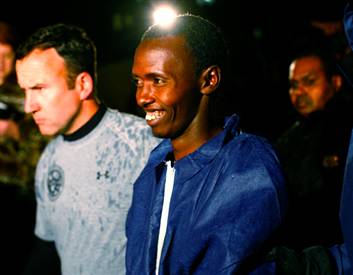 Because I teach on the persecuted church, I know that people are executed, tortured, or imprisoned for their faith on a regular basis in Somalia. I know that Christians there can’t even register as refugees to flee to safer places. I know that a Muslim was recently shot in the street for not praying at the right time. I know that women without head coverings face jail or worse.

In combing the news for stuff to share with my kids, I learned that the HIV AIDS pandemic has hit Somalia but the culture is so brutal that doctors often dare not test for the disease, for fear that the messenger will be killed. The land is so dangerous that the CIA can’t get an accurate census report.

Because my kids are doing a “30 Hour Famine” this weekend to raise funds and awareness of world hunger, I know that a quarter of children there die of malnutrition or before they reach the age of 5. I know that their life expectancy at birth is 46.2 years.

I’ve learned that the average Somali pirate is a teenager who has probably never been to school. Less than 38% of Somalia’s population over age 15 can read and write.

Somalia is crawling with nomads, many of whom are refugees fleeing famine and clan warfare.

Almost all girls in Somalia are subjected to female genital mutilation, usually at around six or seven years old; some die from it while others survive and suffer all manner of pain and complication for the rest of their lives.

The average family has about six kids. Combine this fact with those above and know this: kids grow up watching their siblings and parents die from causes children in the USA don’t even have to consider. Parents are left with the awful choice of choosing which child eats, and which goes hungry.

If I grew up at a level of starvation or malnutrition that stunted my growth and took away one or more of my small siblings, how would I feel about stealing from a boat flying the flag of a great and wealthy nation? I think I might feel like something was owed to me.

If I had never been in school of any kind, couldn’t read or write, and saw only poverty and desperation all around me, what would I do to escape? How certain would I be that I had no choice but to steal? Maybe I would feel justified in trying to force someone to help me.

If I were a brother, seeing my six year old sister (who somehow didn’t starve to death before kindergarten age) horribly mutilated sexually and then her legs bound together from the hips to the ankles for four months to ensure scar tissue over what had been cut away, how much rage might be inside me?

If I had been raised where there is no national law, surrounded by unchecked violence and perpetual war, might it seem right to me to take my own future in my hands, even by use of brute force? I can’t say for sure that it wouldn’t.

If I struggled just to stay alive, and heard all the time about rich Americans, would I think that if I stole their boat full of famine relief supplies, they could surely send another? Probably. Or maybe I would just feel like I was cutting out a middle man and expediting the process.

If I arrived on foreign soil in handcuffs and an over-sized jumpsuit, didn’t speak the language, and the press pointed cameras, flashbulbs and microphones at me as they shouted indecipherable questions, might I grin to persuade myself I wasn’t about to die? False bravado is not exactly abnormal among at-risk teenage boys, is it?

Oh, I don’t think pirates are “right” in their choices.

But I don’t think those of us who live in comfort and safety begin to grasp the landscape of those choices.

As for me, today I won’t decide that there is “nothing I can do about it.”

As for me, today I won’t waste my words condemning what I cannot possibly really understand.

As for me, today I will stand before the throne of the only One who has all power, and I will cry “mercy,” and I won’t give up.

What will you do?