The precious angel sitting on my dear friend’s lap is Sara (her name has been changed to protect her). She is 12. Over a year ago her father left her mother for another woman. Her mother then found a job working in the home of a woman living far enough away that she stayed at the woman’s house instead of commuting. Sara’s younger siblings went to live with her father and step-mother, but not Sara. 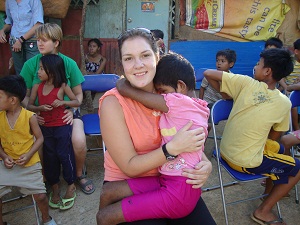 The day this picture was taken I was visiting the village where my friends had been doing ministry this month in the Philippines. As Charlotte went to tend to the children during the group’s church service, Sara was passed to me and I had the privilege of holding Sara the rest of the night. We sang songs and she loved to be hugged and cuddled. She just wanted to be held close. She craved affection and touch. Soon, I would learn why.

After the church service Matt, the group’s leader, came and lifted Sara from my arms. She started to whimper and cry. She grasped for my neck. She knew it was time to go “home” and she didn’t want to go. As I followed Matt down the dirt path, I would soon realize the nightmare of Sara’s hellish reality.

Sara is blind and severely malnourished, which has limited her mobility. As a result of her disability she is considered “hard to care for” so when her mother and father split, instead of going to live with either parent, she was placed in a 12ft by 16ft room in the village, alone. It was nothing more than a chicken coup that she was made to share with two roosters.

When Matt’s team first came to the village, they found Sara lying naked on a large wooden plank- the only “furniture” in the tiny space. Because of her disability Sara is not able to get herself to the bathroom without help so she was left to “just go” and it was easier with less mess if she was not clothed.

As a result of lying in the filth, her beautiful tan skin starting growing a fungus which has gone uncared for, for more than a year. Sometimes food would be left for her but with no one to help her eat, it is hard to determine how much food Sara receives and how much the roosters eat. She has been left in these conditions for more than a year with little to no human contact or interaction.

When her mother would visit the village she would seldom come to see Sara. Her mother had not spoken to her for about a year. Dark. Alone. No human touch or love for a year until Matt’s group came! And the limited human interaction she had received was unwarranted by an uncle who forced himself upon her shortly after she was initially left there. Villagers claimed not to know what was happening. Everyone turned a blind eye.

As Matt lowered her onto the wooden plank on which she existed and closed the door to her tiny, dark, lonely cell something welled up inside me that I could not contain. We were really going to leave her there, alone, and walk away!

My eyes flooded over with tears, I choked. I turned on my heels and briskly walked a safe distance away as sobs began to wail from deep within me. Not okay.

It’s never okay for a small child to be treated as less than human, because of a disability she was born with!

THIS IS NOT OKAY!

I wish I could tell you those words brought me peace that passes understanding, but in truth, I continued to violently grieve Sara for the next three hours. My heart had been ripped out.

It was left gaping.

Kristen is from Enon, Ohio and is currently a participant on the World Race.