“After these things the Lord appointed seventy others also, and sent them two by two before His face into every city and place where He Himself was about to go.” -Luke 10:1

Chris said, “I think that we should make this next camping trip a Luke 10 adventure.” What Chris meant by that statement was to follow what the disciples did when Jesus sent them out; go two by two and take nothing with you.

We took that to mean, take not tents or food. Our contact had asked us to prayer walk through some local towns, and this town was about as remote as you get. Our previous two camping trips consisted of 15-30 degree weather with the occasional snow flake.

We set out on our adventure and asked the Lord to go before us and open the doors that He wanted for us. We arrived in the town and a little child stood before us near his father. We could feel that the Lord was with this child as he scurried into a restaurant. We followed and sat next to a group of local men who spoke a Tibetan dialect. 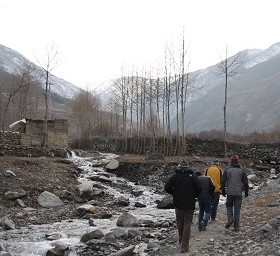 I took out my bible in the restaurant and began reading Luke 10. I told the group that we were looking for the man of peace in town. I could feel that the Lord wanted us in this restaurant as I kept hearing, “Stay here.”

We pulled up to a house, and one of the locals escorted us into his parents’ house. We shook the hands of his father and put our stuff down in an open room of the house. We couldn’t believe what was happening. After we set our stuff down our new friends asked us to come pray with them at the temple. We shouted for joy and gladly accepted. 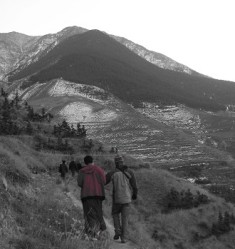 From there, our friends took us up on a mountain ridge that overlooked the entire valley. We stood at an elevation of about 12,000 feet, revering the God that we serve. Huge mountainous peaks surround us from every angle as the sun plummeted behind us. We all smiled at one another as the adventure continued. When we arrived back at the house, our friends took us into their parents’ room as food was being prepared. We sat down around a stove as they served tea and soup to us. We conversed as best we could through charades and one of our brothers who new some Chinese. We again blessed our Father and ate what was put before us.

When dinner was over, our friends took us into our bedroom and began to play a little local music on a small guitar. After he was finished, he gave the guitar to Chris, and he began to worship the living God. Our friends shouted with joy as we danced around the room. We couldn’t believe what was happening.

When we finished worshiping, our friends insisted on tucking us into our bed that they had prepared. Five grown men piled into a heated bed with huge blankets covering our every side. We sat and laughed together as our friends just looked on with amazement. I took out my Bible and read Luke 10. We found out that the Lord had provided every single part of what the disciples experienced, except a healing (which happened at the end where our contact was healed from his cough). A window opened, and our contact shared the Gospel in what Chinese he knew. The four of us prayed while the Spirit did the work. 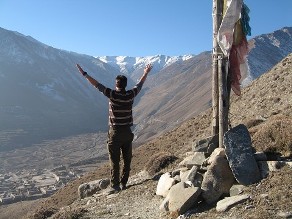 In the morning, we ate breakfast prepared by our friends and fellowshipped together. We laughed and drank yak milk together. After breakfast, we decided to climb the mountain peak behind us and thank the Lord for what He had done as well as to send more workers into China. After ascending the mountain peak, I stood next to some idol prayer flags and proclaimed the freedom of Jesus Christ over the valley. The Lord had guided us to a town in the middle of China, and He wanted His presence to reign. We brought that presence and proclaimed the Freedom that only Jesus can proclaim.

Our local contacts will continue to follow up with the work that was started.

Chad is from San Diego, CA. He left his lucrative job in real estate to travel the world . He’s been doing this for two years now, leading groups of young missionaries around the globe to discover the kingdom of God.