This is a true story. It happened to me just recently when I was doing my one day Rim to Rim hike of the Grand Canyon. It was approaching evening and it was rapidly getting dark. While I always carry a headlight/flashlight just in case Im out on a trail longer than expected, this time I took it out of my pack to save a little weight. Besides, I wasn’t planning on still being on the trail by sundown.

Okay, that was my first mistake. Don’t assume, no matter how good or how prepared you might be, that you still don’t need to plan for the unforeseeable event. For example, while I was making pretty good time on the trail, I didnt plan on needing to rest as long as I did. I should have seen that one coming, since I drove all night from Tucson to the North Rim, only to get there and start hiking. Nor did I think I would need to totally redo all my foot care stuff, like new moleskin and band-aids and fresh socks and then finally need to re-organize my pack and shift things around.

To make a long story short, I spent about an hour and a half longer than I expected down by the Colorado River, taking care of business. So now it’s dark and I’m getting pretty tired. My legs are tired of climbing. Ive been hiking all day – over 22 and a half miles and only one and a half miles to go. And while I physically felt stronger than the previous year, this kind of extreme hiking can still take a toll on one’s body (not to mention the mind), especially without the proper rest and food consumption the night before taking on something like this. During the last couple of hours of my hike, I was constantly fighting mental fatigue, mostly brought on by improper planning and rest. 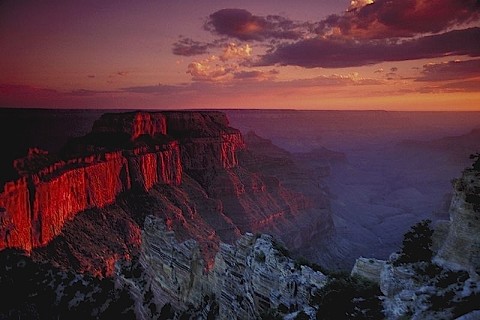 As darkness fell on the winding switchbacks, making it extremely difficult to see each step up the rocky path, I started getting frustrated with God. I would say something like, God, you have to help me because I am getting tired and I cant see my path and I want out of here. I know its my fault I didnt come prepared, but I still need YOU to get me out of this mess.

This kind of one-sided conversation went on for about an hour. As I continued to stumble my way up the dark and winding path, tripping countless times over uneven ground, I kept complaining to God that I cant do this and that HE was going to have to. It wasnt so much that I couldnt do the hike, because I knew that I could. But it was more that without the light to give me some direction on my path, I was merely stumbling in the dark with every step I tried to take on my own. And stumbling continuously in the dark uses up a heck of a lot more energy than if one has a light and is sure-footed.

As I continued to grumble and complain that God wasnt providing, it finally occurred to me that I was probably like one of the many Israelites who wandered the desert for forty years, moaning and groaning about everything. And while God probably got tired of their lack of faith and their constant whining and groaning, He still loved them so much that He kept providing for them all the while. So finally, I shut up. I told God I was sorry for being such a whiner and I merely prayed that he would provide in spite of me.

Heres where the story gets good. Not ten minutes after apologizing to God for being such a big whiney-baby, I stopped to take a short break. While I was sitting there on a rock, literally wishing for God to either pick me up and float me to the top or to somehow provide some light to my path, a lone hiker, bearing a flashlight, comes out of the darkness and up the path from where I just was.

To my delight and almost disbelief, it was a ranger checking to make sure those who were on the path were doing okay. We talked for a few minutes and then as the ranger left, she offered me her spare flashlight to assist me with my final ascent. It was at that very moment that I saw God really provide. At that moment, I saw real proof that He is still listening and still answers our prayers.

I know it wasnt a healing or a miraculous sign or some incredible feat to show the world He is who He says He is. It was just a simple flashlight to light up a dark path for just one ill-prepared hiker–me. Why? Because that was my need. And thats how He works. One answered prayer at a time. Not usually on a grand scale, but on a personal level, meeting one single need. Not usually on our terms or in our time frame, but always perfectly at the exact moment.

I learned a few things that night. First, I am a big whiney-baby who loses faith easily. Second, even though Im a big whiney-baby, worrying only about me, God still loves me in spite of myself and wants to provide for me. Thirdly, that without the light (Gods light) to illuminate my path I am just stumbling around in the dark, using up twice as much energy and getting nowhere fast, other than frustrated. Finally and maybe most of all, I learned that God answers prayers, especially the little ones. Because those little answers can be the faith builders, the pieces that make up the cornerstone in which we can build our entire relationship with Him upon.

If you liked this article, check out: Sweet Morsels: Divine Direction in China

David is a weekend backpacker and volunteer worship leader in Tucson, Arizona, where he lives with his wife and four children. When he’s not busy running his small landscape compay, he spends his time as a Christian songwriter, working toward completing his first CD project in early 2009.