This past weekend I was able to spend some time with founder of The Simple Way community in Philadelphia, PA – Shane Claiborne. Shane is the author of The Irresistible Revolution: Living as an Ordinary Radical. If the book isn’t proof enough, I can personally tell you that this guy is living like an “ordinary radical.” 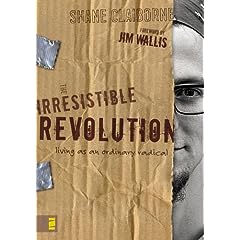 As I began reading the book this past summer while serving at a church in Chicago, I became destroyed. I began to question my faith – whether or not I was where I was supposed to be.

As Shane would say, “My life was easy before I started to follow Jesus.”

I was able to spend some time with Shane, eating our barbecue pork sandwiches (slightly feeling bad because we knew Shane and the simples were somewhat vegetarians), but for this event, he made it known that they weren’t really vegans, but “freegans.” They would eat pretty much anything people would feed them.

I got to talk to Shane about where I was heading in life, and asked him for a little advice. He asked me what I wanted to do after “graduating,” which probably won’t happen for another couple of years. I told him that I didn’t really know. He responded, “That’s okay. I don’t know what I want to be, either.” I asked questions about preparing moms for their children’s “crazy” ideas for living radically, and little ways we can love each other.

After he preached, we had a question-and-answer session. Shane’s great, because he backs up each thought with Scripture and real-life faith through action. He was asked questions about where the Church was supposed to stand on homosexuality and the average day-in-the-life of someone who lives in a faith community.

Shane had this phrase he used – “It had flesh on it.” By this, he meant that when something or someone has “flesh on it,” it’s real. The flesh is now emotional, personal, beautiful and heartbreaking in its own way.

He spoke in our Sunday school class the last morning. It was probably one of the most convicting hours of my life.

He shared more about communal life, and some of his times in Calcutta and Iraq as a member of peacemaker team from America. Shane began telling us a story of a kid he met while in Iraq. This kid made money by shining shoes. He came up to Shane asking if he could shine his sandals. But Shane was warned not to give any money to the kids because there were so many.

Shane continued to turn to say no, and as the kid finally ran off and screamed, “You son of a b***h!” We all erupted into nervous laughter as Shane screamed those words in our church. The worship never felt so alive. I began to find that when God enters the streets, we enter the lives of those hurting and scared. It makes the story beautiful and shows you what real faith acted out looks like.

Shane also showed us a video of a malnourished boy shaken up by a recent bombing in Calcutta. You could see the skin stretched over bones, as the boy moaned in a language everyone understood. One of Mother Teresa’s Sisters was there with the boy. She picked him up and laid his back on pillows to comfort him. She began to rub the child’s starving belly, frightened face and quivering legs and arms.

The child began to stare straight at the Sister’s face as she comforted the boy, whispering and loving. The boy slowly became quiet and looked as though he felt peace. As I saw this, my heart began to beat fast. My chest grew tight and my eyes became blurry as I saw the face of Jesus. I was breathing so deep and so fast trying not to completely break down. It was one of those moments that “had flesh on it.”

We got to take Shane back to the airport in the early morning. It was a bittersweet experience as I sat behind this guy who was changing the world by doing the little things with great love. We made jokes about the abundance of Waffle Houses and how good their waffles really are.

My personal experience with all this was to see that another world is possible. We have to be careful not to fall in love with the movement or the revolution, but to concentrate on our relationships and the little things. Mother Teresa said that Calcuttas are everywhere, if we have eyes to see. Though Shane has found his Calcutta in Philly, I plan on living in Calcutta, India this next semester through an organization called “Word Made Flesh.” We will be ministering to the women involved in the red light district of Calcutta, as well as volunteering in some of Mother Theresa’s hospitals.

I personally can’t think of anywhere else I’d rather be.

This revolution is irresistible. We are becoming more aware of the world we live in and we are seeing the pain that people face everyday. I’ve heard it said that where you live shouldn’t determine whether you live. We are learning to love as Jesus loved – from Calcutta to Uganda, to Iraq and the United States. Each soul is beautiful and deserves equal rights to live as a human and discover their own place in the world.

“Another world is not only possible, she’s on her way. On a quiet day, if I listen very carefully, I can hear her breathing” –www.awip.us

For more articles by Josh Casper, check out:

If you liked this article, check out more articles on Shane Claiborne and The Simple Way:

Josh is a junior at the University of Southern Mississippi who participates in various church ministries and community projects. Josh is currently majoring in Psychology and hopes to someday use it in counseling. He is currently involved in raising awareness around his campus with organizations such as Invisible Children.

For more information regarding the organizations mentioned in this article, check out: