Have you ever seen the movie Finding Forrester? It’s about a young, African-American teen who has a knack for writing. One day, he ends up in the apartment of a crochity, old white man named Forrester who wrote a bestselling book and has since disappeared into obscurity. 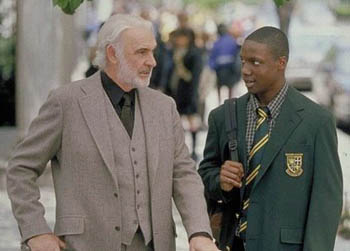 Inevitably, the two become great friends, and the old man helps the young man become a better writer. He believes in him when everyone else doesn’t have the perspective to understand his dreams enough to encourage him. Why would an athletic black boy want to write when he can play basketball?

The answer is that we all need a Forrester, even if he is a bit quirky. And the irony is that the Forresters of the world are looking for someone to continue their legacy, to make even their dreams come true. The church calls this “discipleship.” Businesses call it “apprenticeship.” I just call it searching for a spiritual father.

I’ve been in search for a father for awhile now. Someone’s always “so busy.” I don’t know about you, but having a life-advisor who’s distracted by a hundred other meetings isn’t what I’m looking for. First and foremost, I need someone who has the time to care.

So, I have ended up with the conception of a father as someone who’s always wrapped up in his own business and doesn’t have time for silly questions or stupidity. I’m not sure how much of this really has to do with how my natural father treated me. He was a good dad – around a lot more than others and way more affectionate than I’ve seen most guys with their kids.

Yet, every family has scars, and you’d be surprised what a sharp reprimand or cruel words at the right time can do to a young boy. I developed some insecurities at an early age that came from a variety of authority figures. I think it was exposure to teachers, pastors, and counselors that really ruined me for discipleship. I began to think that I’d never have anything to say, nothing worthwhile, any way.

And I became afraid to ask. If no one affirms you when you ask a question – even a stupid one – you lose the confidence to ask the questions that really matter, like “How do I know if she’s ‘the one’?” or “When do I know that I’m ‘called’ to something?” We all have questions, sometimes more than we have answers. I was a chubby teenager who went through puberty late (my voice still cracks), didn’t have an older brother, and wasn’t a member of a discipling church (the congregation was literally dying throughout the years with no one to replace the elderly people).

By the end of high school, I hadn’t heard an affirming “yes” in awhile, so I began to assume that the answer was “no” without even having to ask it. Of course, this translated to God the Father (whom I only knew that I was supposed to trust because it’s what our currency says) and led me to a place where I didn’t feel I could ask him any questions, or that he’d answer. Although I haven’t had a lot of long-term discipling encounters with adult men in my life, there is a short list of significant “father figures,” besides my dad, who contributed to my coming into manhood.
I had a brief “discipling” experience in college.

There was my college chaplain who answered many of my “why” questions concerning the faith, even before I came to Christ. He was an African American man named Chaplain Louis Eason (with some more academic letters tacked onto the end, but I would mess up the order); we just called him “Chap E.”

He was an older, military man who talked about the “old days” when he smuggled Bibles into Turkey and saw miralces. He was an excellent preacher, always innovating new ways to grab students’ attention (he once dressed up as Pontius Pilate around Easter time and delivered a message about a rabble-rouser named Jesus). He told me that he spent at least twenty hours a week, memorizing his sermons, and I never saw him use notes.

We met a few times one-on-one, but when he wasn’t at the pulpit he seemed really tired. The administration of the college had put out so much of his fire with pressure to provide non-Christian or “diverse” speakers at weekly chapel that it seemed as if he had fought his “good fight.” Although I learned a lot about the Bible from him, I wondered where that radical whose prayer blinded Muslims went. I needed someone to show me that the stuff in the New Testament was still real, and my search continued.

I knew all about Jesus before I came to know him so that once I was a Christian, I wanted the whole package – raw, radical discipleship. As I looked around, I didn’t see a lot of people who were really interested in “living it.” I wanted to give up everything to follow Jesus, and instead, I heard many fellow believers tell me to be a good steward and do my homework. To say the least, I was disappointed. There wasn’t someone to tell me to not get discouraged if anyone looked down on me because I was young, and plenty did. I wanted more.
Continued in Searching for a Spiritual Father, Pt. 2

If you liked this article, check out: Leaving Home: Why we need a pilgrimage