She is led into the room, just like many before her. She grips the arm of her leader. An old, tattered, grey shirt is wrapped around her head. Blue cloth hangs loosely off her body as her bony shoulders poke out between the holes.

A wrap skirt clings tightly to her waist, and hangs down to her ankles. It modestly hides her sacred body parts – thighs and knees. As she comes closer, I look into her eyes. White, cloudy, empty eyes. Blind eyes. Poor eyes. Eyes that, despite their blindness, have probably witnessed more hardship than I can even imagine. Blindnessis it a curse or a blessing? 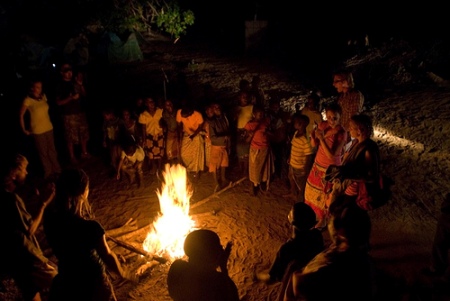 Is she 80? Or just 40? Wrinkles and crippling would indicate the first, while the simple fact of life in Mozambique would point towards the latter.

I have a feeling I cannot gauge age by years. Age is relative. Relative to trials, disease, lack of nutrition, sun

She is led to the mud wall and slowly lowers herself upon the bamboo mat. Her legs curl up beside her and she lowers her head in defeat. I cannot take my eyes off this precious creation.

The longer I study her pose, I realize that she is not defeated at all. She is praying out of complete thankfulness to her Lord and Savior. Her gratefulness is released through hands of praise. Her clapping adds to the joyful music that fills the building.

The rhythm propels movement. Hands clap, feet dance, tongues sing, all praising their Maker. Sheer joy flows freely and bubbles over – lifting the tin roof towards the heavens and pushing the walls back in order to embrace all of his beloved children.

Church in Africa. The blind see, the lame dance, the sick rejoice, the widower reunites with his Bride, the fatherless cries out Abba, the hungry is satisfied and the thirsty drink from His well. The broken are restored. It is beautiful!

“It’s time for us to go out to the poor, to the broken, to the homeless, to the dying and to the lonely and call them to come in. Thousands and thousand of missionaries and ministers need to go out to the darkest places to the poorest places, to the forgotten places, because the wedding feast is about to begin and so many of the poor haven’t been called. Rush out and call them. They will come.” (Heidi Baker, Always Enough)

We have a lot to learn from the poor, the outcasts, the forgotten, the blind. Dare we forget any longer? Our hearts are at stake. Don’t lose heart. Don’t lose sight of the goal – the table. The wedding feast is set. Here in Mozambique people are running to the banquet. They are hungry. Are you running? Are you hungry?

Stephanie Fisk is a traveler of the world and co-founder of a stateside servant mission called Latreia, which you can learn more about here.