Entertainment. Defined by many definition sites as a source of diversion, taking attention away from the current focus or situation. Perhaps you are like me who has no shame in watching a sappy chick flick every once in awhile. Or maybe you are of the more refined type who prides themselves in their line up of independent, or “indie” films they have recently watched.

Either way, it’s a source of entertainment. 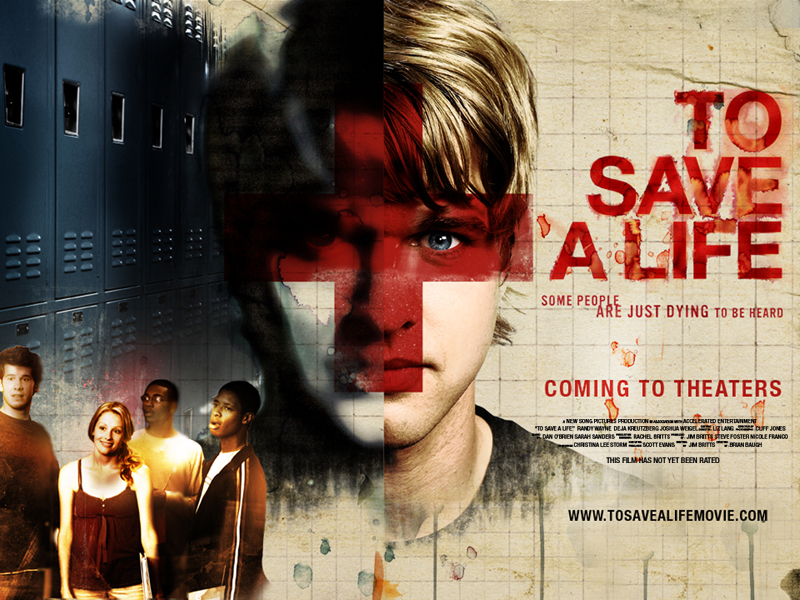 There have been many prophetic words spoken about media and where we as a church are headed. It’s a good thing. Media productions shall continue to increase and with it, share a message that goes deeper than just being entertained, momentarily forgetting your current problems, struggles, or lifestyle. It will not just comfort us by drawing us into a fairy tale world, or boost our ego with intelligent knowledge. It will be about something that goes deeper, something that challenges us to live, become, receive, and respond to a greater call and movement.

I wasn’t sure what to expect when I sat down to watch To Save a Life . Yet, in the first very few moments, my stereotypes of Christian movies from Junior High youth group were overshadowed by the high quality production of this movie. The shots, the music, the acting. It was good. It looked good.

But underneath all of that, the story addresses in a very creative way, the story of a forgotten friend not measuring up to the standards of popularity, the valued. So, the very person who has an awkward limp from saving his friend’s life as a child, is now shunned from that same friend upon entering high school because the standards of friendship and value seemingly changing.

Near the beginning of the film this young man commits suicide. The rest of the film deals with the life of his previous best friend, Jake, and his response to his death. He ends up going through a process where in his difficulty meets God and church.

The movie doesn’t lay out a simple problem solution to these different issues both youth and adults face. In a creative way it showed the complexities of both problems, human motivations and shortfalls, and restoration in the process. It addressed issues within the church that some have experienced, stereotypes, and truths.

I found myself resonating with Jake’s struggle of feeling judged or perceived a certain way by the church, and I cringed in response to the pastor’s son who acted the part but main mission seemed to hurt people,  jabbing little responses here and there, provoking division. Though cringing, I resonated with that too. How often in my struggle at different points with the church in the past, responding out of hurt, have I stabbed back and said things both knowingly and unknowingly that caused division. Funny how I held the church to a higher standard, which should be lived in a responsive and not religious lifestyle, yet had no mercy for their mistakes. I chose to hold them to standards of perfection to religion that I was not living myself, yet the problem laid in the law and not the latter.

What I want right now is to be a part of something greater. Maybe you can resonate with something deep within you that longs for a purpose that is both life changing to you and others. I don’t just want to be entertained, gain knowledge for the sake of knowledge itself, and I don’t want to live for something that is based out of my hurt to get back at the church who hurt me.

Perhaps in one way or another we have had experiences that have hurt our viewpoint of the church, and people in it. But, consider the times we are in, and that there is a sense of urgency in me that tells me to completely ask for healing in this area, to get over it and move on. I’m learning too that I cannot do this myself, for how I have tried in many fashions and ways. Including both running from it, starting my own bandwagon of counter-culture mess, and actively dealing with it. Though it takes a heart that says ok, its really beyond ourselves to complete what already has been completed. Both many years ago on that rugged cross, and how that actually affects and changes our life now.

I can say that I love church now, both the gathering place and congregations I attend, and to the greater church of people I know worldwide in different areas that make up this larger church of the world. Its not an obligation, but a lifeline. It was through healthy relationships, mercy, and being a part of churches that were spot on, that restored my broken view. There were still kinks in the wheel, but somehow I was able to give forgiveness and understanding because I received it myself in these communities.

Maybe like Jake’s situation, it doesn’t make everything apples and ice cream, but it does fill our hearts with the deepest desire to be loved, accepted, and have purpose. It doesn’t make life trial or problem free, but it does free you to not feel the need to hide it in the place of comfort, but be strengthened to continue in the process. It does start to change how you see yourself and others, and it does change what you are willing to live and stand for, and how you treat others around you. And that small day to day thing or things can make a profound difference in many lives both now and to come. I heard a statement recently that expressed to think about what you are willing to die for, for that is, in fact, what you are willing to live for.

The film is set to release January of 2010. Check out the website to see ways you can connect, involve your community, and spread the word. The trailer doesn’t do the movie justice, so if you like that, your in store for even that much more. For leaders, you can also access their site for youth workers and community leaders.

Sarah enjoys creating new things and old alike while traveling to new places. She enjoys art and restoration, a good cup of tea, and puppies. You can access her assortment of artistic entourages she creates here.