When Jesus says love a neighbor, it includes the members of the political party that you aren’t in. This is the same Jesus who gets pulled head, hands, and feet first into politics and elections, where some authors want him to run for president while both sides insist that he’s on their side. I don’t know if Jesus would vote for Barack Obama or John McCain. I do know that Jesus didn’t live, die and rise for the sake of any political party.

It’s a handy thing, of course, to believe that God’s on your side. You wouldn’t really want it the other way around. But I also believe it’s a very dangerous thing when those on either side use language like “I’m a Christian, so I’m voting for _________.”

In 2004, the pastor of my home church stood up two days before the election and encouraged our congregation to “vote Christian”, and then went on with his regular sermon. And as others pointed out at the time, that can be a dangerous and open to interpretation. I knew what he meant when he said it because I know his political leaning. But to the open ear, that’s a loaded statement that can be taken a thousand different directions…what does it mean to vote Christian? And, is there really one choice that all of us who are trying to follow God should all be making? 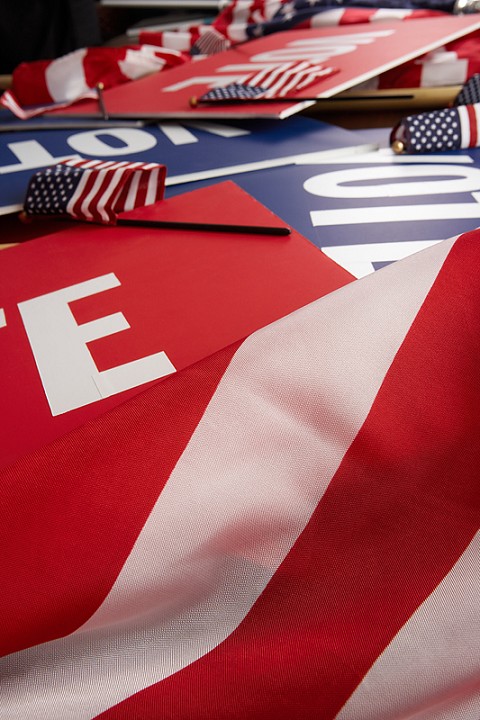 And you and I both know plenty of people who think that if you are a Christian and a conservative/Republican, it’s only because you’re not progressive or intelligent, don’t care about the poor and the oppressed and are trapped in a narrow mindset. Maybe you’re one of those people.

It sounds really hokey. We can scoff at it if we want to, and we often choose to scoff when it’s convenient for us or there’s someone, or a group of someones, we really just don’t feel like loving. But it’s hard to argue when Jesus says that what is most important is loving God and loving people.

I chose to maintain political independence when I got old enough to vote for the 2000 election, because I didn’t want to feel compromised or defined by either party. I’ve voted for members of both parties before and almost certainly will again this year.

Since becoming a pastor in 2006, I’ve worked extremely hard to tell absolutely no one in my community of churches who I’ve voted for in the past, and who I’m going to vote for this year.

Because here’s the thing: if I told you who I was going to vote for (though I’ve had this conversation with plenty of you already), wouldn’t it change the way you’re reading this? Wouldn’t it make you read it in a different tone, based on your agreement or lack thereof? Wouldn’t you want to paint me with the same broad stroke?

Maybe I should have more faith in people. I don’t know. It’s been an interesting experiment, because what’s happened is all the republicans in my churches are convinced I’m voting for McCain, and all the democrats are convinced Im going with Obama. Because don’t you want your pastor to vote the way you do? And I don’t mean to be deceptive.

But I worry that everything I stand up and try to do on Sunday mornings would be tainted either way if I mixed politics and pulpit. Those who agree would think I was better, those who disagree wouldn’t hear things the same way again, even though the words would be exactly the same.

There are some things more important than politics. And for all the good we want Jesus to do for our guy this November, we can end up doing plenty of harm for that which is most important along the way. Often times, this mentality comes off as a “Can’t we all just get along and sing songs and chase rainbows?” sort of thing. We won’t all just get along. Ever. And the truth is, we probably need both liberals and conservatives and their passions, when placed in proper context, to make things work best.

The idea isn’t that we should all be independent: if you’re a Republican, I’m sure there are some good reasons that you believe in strongly, and Democrats likewise. I’ve heard the arguments for both guys, and they both have good qualities, no matter how much we try and “two-dimensionalize” our politicians by deifying our guy and demonizing the other (there are all kinds of made up words in that sentence). But there are some things still more important, and we can compromise ourselves on those things while chasing something smaller.

You’re always going to disagree with somebody, for the rest of your life, and probably passionately so. Your mind may never change: I fully anticipate disliking Alabama for as long as I live, and well into eternity. But we have to be better at remembering that which is most important. And then we have to be better at living it.

The Kingdom of God does not depend on the outcome of an election or the fate of the American dollar. The Kingdom of God is more concerned with the way we choose to love each other. Don’t show me the Bible verses that lend themselves to a pro-life interpretation, or the ones where Jesus talks about taking care of the poor and the oppressed. Show me you can still listen, respect and love those with a different opinion. Show me you can still be passionate and still discuss the issues, and still make an informed decision that does involve God, but do so without losing the element which Jesus says is most important.

The beauty of communion for those of us who follow God, in part, is that we all take the same piece of bread and drink the same grape juice (technically, that’s not true if you dabble in the wine, but you get the point). The communion table is the only place on earth I know of where men and women, white and black, young and old, yankee and redneck, Vol fan and Bama fan, and Democrat and Republican all receive the same grace, the same mercy, the same body and blood of Christ. And we are all called to live in the same way. There is no distinction. You will disagree. I hope we’ll all continue to fight for that which we believe is important, including politics.

But if we lose love, then we’ve done more damage to the Jesus that we want so badly to be on our side than losing an election could ever do. That love may be hardest when we seem so far apart on issues that seem so important to us, but it also means t
here’s no better time to learn it.

If you liked this article, check out: Idolatry of the American President

Will is originally from Knoxville, TN and currently serves as pastor to a small community of churches in southwest Virginia. You can email him at [email protected]