As part of The Fund for Theological Educations 2007 Conference on Excellence in Ministry I was able to visit Adalberto United Methodist Church today.

Adalberto UMC is a storefront, mostly Hispanic church located in the city of Chicago. It has become famous for the actions of two of its members; Elvira Arellano and her son Saul.

Elvira has taken sanctuary in the church for the last ten months as she has faced deportation. Sanctuary is a practice that evolved in Europe during the medieval era, and has ancient historic roots in several cultures, that basically states that anyone taking sanctuary in a church or monastery is free, or safe, from being arrested by the authorities or killed during time of war. This practice has been renewed in America today, and it began with Elvira and Adalberto UMC. 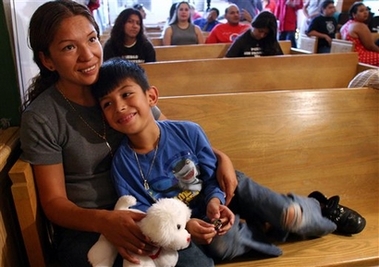 Elvira is an illegal immigrant who has a son born in the United States, and thus is a citizen of the United States. After 9/11 she was found to be living here illegally while working for the Chicago airport. One night nine FBI agents burst into her home seeking to capture her for deportation. Since that time she has sought, and received, sanctuary in Adalberto UMC, and she will remain there until this current legislation regarding immigration is decided.

I, and several other FTE Fellows, were able to have a discussion with Rev. Coleman and ask him penetrating and difficult questions about the church and his ministry. I walked away with a great respect for the man, Elvira and Saul, and the church that meets at Adalberto. They are a group of Christians that understand the scriptural call for welcoming the stranger, taking in the least of these, seeking mercy, and not sacrifice and loving justice, and have refused to ignore it.

Rev. Coleman told us the story of the churchs birth after several Mexican families left the local, racist Catholic parish that relegated them to worshipping in the basement. He described their multiracial congregation made up of Mexicans, Puerto Ricans, African-Americans, and whites. He told us the story of Elvira and her courage during her fight to remain with her son. He told us of Adalbertos commitment to obeying God, rather than men.

See, it is easy to get caught up in the current political dichotomy of the immigration debate. We can talk about where our taxes go, national security, cheap labor, civil rights and human rights. These are discussions that each have different measures of value to them, but we as Christians must move beyond all of them.

Adalberto UMC is living these truths out daily. After my visit to Adalberto I was inspired. I saw Christians truly ushering the kingdom of God into their corner of the world, and I believed that it is still alive and embarrassing the kingdoms of this world, i.e. America.

Adalberto is fighting for legislation that will declare that Sauls rights as an American citizen include not having his mother deported to another country. They will continue to provide sanctuary for him and his mother until that legislation is decided for or against. And if it is decided against they will continue to treat Elvira as their sister, because that is what she is.

Adalberto is a church that is done compromising the beliefs of Christianity to avoid persecution in this nation. It has been a long, hard road for Elvira and Saul, Rev. Coleman and Adalberto UMC, but so was the road to Golgotha. And so is the road that we, as Christians, are called to walk.

Jimmy McCarty recently graduated from Pepperdine University with a B.A. in Religion. He currently attends Claremont School of Theology and is pursuing a Master of Divinity degree with an emphasis in Urban Ministry. He serves the “least of these” in Los Angeles and overseas in India, Uganda, Kenya and the Caribbean. He gets married really soon and can’t wait for the next phase of life. He is also not to be confused with the other Jimmy McCarty that writes for Wrecked – what a small world!

For more information check out:
The Fund for Theological Education
New Sanctuary Movement