This part of my story began exactly two years ago as I wallowed in nausea and a fog of apathy while I was in my first trimester of my fourth pregnancy. I remember lying on the couch feeling very miserable and telling my husband, Acey, to just go get something permanent done because I could not handle another pregnancy. Acey, in his wisdom, replied, Now I am not going to make any rash decisions while you are feeling so bad. Still, I was convinced I was done with having children.

In December, 2005 (still pregnant) I was teaching a study on Joseph. We were looking at Genesis 38, which is a side note about the life of Judah. Judah had three sons, all of which were evil. The first one marries Tamar but the Lord kills him because he is evil. The second knows that he is to marry Tamar and that the first son he produces will actually carry the name of the dead brother (Deut. 25:5-10). Onan knew that the offspring would not be his; 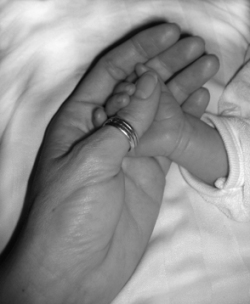 so when he went into his brothers wife, he wasted his seed on the ground in order not to give offspring to his brother. But what he did was displeasing in the sight of the Lord; so He (the Lord) took his life also (Genesis 38:9-10). It struck me that God takes very seriously the seed or sperm of a man because it is the source of life.

So began my struggle with the Lord of whether I should control the seed. I decided not to say anything to Acey, hoping that he would just take things into his own hands. Then it would not be my responsibility if we did anything permanent and I would not have to answer to the Lord. But eventually the conversation came up. I felt in my heart of hearts (and based on many scriptures and experiences) that we were being disobedient from what God may be calling our family to do if we were to take control of our lives and conclude that we were done having kidswe couldnt handle anymore childrenwe were ready to move onwe had learned all that we needed to learn through infantsand from all logical standpoints, especially from mans viewpoint, we should be doneanything else made no senseexcept when you look through Gods eyes and begin to wonder what Gods plan for your life is. And perhaps ask yourself, If I have said that I have given up the right to control my life and God is asking me to do something which makes no logical sense, do I have the right to say no? I didnt feel that I had that right.

The struggle is not so much about birth control as it is about life control. Not the life of a baby but my life. I would be very content knowing that I was done having children and could move on from this phase of life, but the Lord continued to bring me back to His role in my life, His purpose, His ways which are far different from what I would predict for my future. I dont want to miss out on something the Lord has planned for me because I want to take control of what I think my life should look like. We dont have any idea what the future holds. Do I want to be so in control that I miss out on the unexpected from the Lord?

Over the next year and a half the Lord has taken me on a spiritual journey that has led me to where I am today three months pregnant with our fifth child. I have seen him work in various ways to keep my struggle before me. He was constantly reminding me of what He wanted me to struggle through giving up the right to control my life. Would I be willing to say yes to Him, even though those around me would think I was crazy, perhaps would not understand? Would I be willing to follow Him in a path that might set me apart from everyone else? Would I be OK with walking by faith and not by sight?

What radical step of obedience is God calling you to that will set you apart as distinctive from the world?

Sarae Martin is a shepherdess of a small flock of four as a stay-at-home mom. She graduated with a degree in Secondary Education, majoring in Spanish and English. She taught for three years but is currently living her dream of ministering at a Christian Camp in Michigan alongside her husband.