I never meant to fall in love when I went to South Africa last September. I left thinking I could make a difference in this world. I would be that difference. I find it amusing that despite our arrogance, the Lord will still use us and rip us apart to our core. 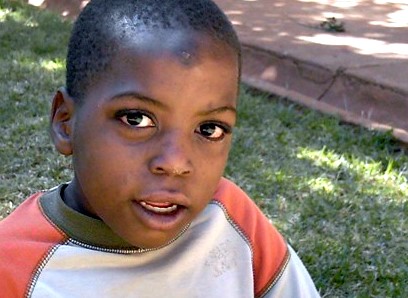 I fell in love with every child at Mohau Childrens Home for the HIV infected. Working at a childrens home for nine months, falling in love seems an easy task. But I am not speaking of affection, liking and sympathy. I refer to a broken love: limitless and unconditional. It was not me; it was never me. It was the love of the Father. I was worthless in that place. I was tired; I gave up; I ignored children; I turned a cheek to noses full of snot. I never gave enough of myself.

I worked alongside two dear friends of mine, Sam and Kyle. We spent our first three months confused, tired and hollow. We spent many days considering giving everything up, giving in to an easier option. HIV infected, institutionalized infants are poster-children for the marginalized. Abandoned by families with little hope for adoption. Finally we let go of controlling the situation. We gave in to the love of the Father and committed to being mothers, fathers, brothers and sisters to the thirty-four children.

The day before we were to leave, our boss, Tiekie, took us out for lunch. She gave us a brief history of each child that we had grown to love. Stories that we had longed for but never knew. With each word that came from her mouth our hearts broke piece by piece: abandonment, loneliness, abuse, disease and sickness. Then we came to Ernie. Ernie was the child that had held me the tightest. He was a ten year old who was HIV positive, autistic, epileptic and diagnosed with cerebral palsy. Suffering seems to be a gauge by which one cannot measure but Ernie was certainly one of the sickest children at Mohau. Tiekie noted how he had been getting sicker because there was no kind of ARV treatment for his HIV. She and the doctors were posed with an ethical dilemma: let the HIV kill him or medicate him so he could live an abandoned life moving hopelessly from institution to institution. She asked us, What would you do? My heart shattered. With all my strength I held back the tears. I saw the hope vanish from Sam and Kyles faces. I had no words.

Ernie knew this world better than I did. He knew love. He was a heart breaker. I am sure Ernie had wooed many women before me with his charm, his rhythm and his love for people. I underestimated Ernie. I thought I was humoring him, singing his songs, clapping my hands. When all along he was humoring me. He knew I would leave. His life had been so temporary, why would I be any different from those before me?

Every morning I walked into Mohau, I wondered if Ernie had remembered me from the day before. He remembered my songs, why wouldnt he remember me? He used to scream scrambled versions of my name. The cynic in me thinks he was speaking in some mangled version of Sotho but my heart prays he knew my name, my face because I will never be able to forget his.

The day I heard Ernies story, of the choice that was to be made, I felt like everything inside of me had evaporated. I was this shell walking around, useless. Incapacitated, how could I help this child? That night, when my team had a time of prayer and worship, I wept for Ernie. Before that moment, I have never cried for anyone but myself. The Lord grabbed me by the heart and he wrecked me. He gave me a glimpse of his compassion; I knew I was crying his tears for his children.

God is tired of these stories. He is tired of our arrogance and contentment with the situation. I do not know what will happen to Ernie. Everyday I long to see him again. The last day I spent with him, I laid beside his gentle body and whispered prayers into his ear. He may never know what I said but I pray that he is daily inundated with the love of the Father. Ernie is loved; he is loved beyond measure.

I am in shambles. The Lord ruined me. I would not want to be anything else. I lie in discontent, dissatisfaction, asking for more from my Father. Asking for a greater understanding of who he is and what needs to be done in this broken world. Tears are beautiful; they make us thirst but it is time to start crying tears of joy.

Hannah Lythe recently returned from a nine month long trip to Pretoria, South Africa as a First Year Missionary. She worked in an a Children’s Home for HIV/AIDS infected and affected children. She currently attends Boston College as an English and Theology double major. Through this, she hopes to pursue a life of advocacy working towards the spread of God’s love amongst the suffering.