The time is on us. It’s another round of political grandstanding, and it seems every news outlet is obsessed with next year’s general election. Barack, Hillary, Huckabee, or Rudy; who will be the next leader of the free world?

I was recently the keynote at a large convention with Christian school Administrators speaking on the book Love This! (a new release with Zondervan in 2007) I was adamant that Jesus called us to Love God, and then reach out to people around us in our own community in order to truly follow Jesus. It seemed like a pretty easy Matthew 22:37-40 style message. Love God. Love others. 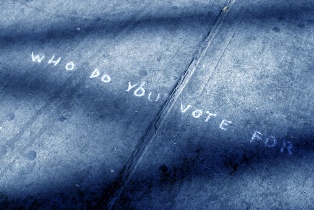 If we love God, we’ll figure out how to reach out and help those addicted to various substances.
If we love God, then we’ll love people…all peoplebottom line.

After the 45 minute keynote, a Christian School administrator stopped me on the way out and said, “If you talked like that 10 years ago, we would have branded you a liberal and pulled you off the stage.”

I know he didn’t mean literally pull me off the stage, and He, by no means, represented the whole of the Christian schools in America. Further more; in his defense, he tried to show me the way the Christian school system works. He explained the way they’re trying to raise Christian leaders and the strength of conservative values. All of which I am in favor of promoting…and then I started thinking again

When did Jesus’ message become offensive to conservatives?
Have we boiled down Jesus’ life to one political party or one set of political values?

I know the hot buttons are abortion, illegal immigration, and health care; but what if we shifted the whole debate. Not to the point where we became zealot like zombies, but what if we’ve become a product of our own demise.

We say we want God to reign in our personal lives, and in our communities; but how many of us are willing to put aside political party loyalties, and look at candidates that are truly going out to help the greater good of mankind.

How many of us are as concerned with the health and well being of the homeless as we are of prayer in school?

How many of us are willing to reach out and help those in prison, as much as we are passionate about the infant’s right to live outside their mother’s womb?

This is one of the most controversial topics today, and Ive already taken on a new life of criticism for even thinking these thoughts; but I believe it’s time that we just scoot down to the bottom line and decide if we are truly going to ‘do what Jesus did’ instead of trying to live within the boundaries a few political demagogues have created for us.

Its almost like the two major political parties in America have boiled the hot button issues down to a value meal similar to what you might find when you drive through a major fast food restaurant.

If youre pro-life, small government, lower taxes, you can order a #2 Republican value meal.

If youre a pro-choice, pro-immigrant, pro-homosexual marriage, you can order a #3 Democrat meal, and supersize it with some education!

What have we become? Why have allowed the system to dumb us down to a relative happy meal and fries?

I looked at the administrator with compassion in my voice and asked him to please not brand me conservative or liberal. I don’t want to live inside a man made debate, rather; I want to follow Jesus. Im not interested in the latest capsulated sound byte; I want to care for widows and orphans while keeping myself unstained from the world (James 1:27). I want to do to the least of these like Jesus Commanded to give drink, give food, and visit in prison.

Don’t you want your life to mirror that of God’s only Son? Dont you want to vote for people in public office that share the same personal values as you do, with the ability to compromise at the highest levels of power so the majority can sing together with a resounding voice, America The Beautiful.

Maybe it’s time we re-evaluate our loyalties. Maybe it’s time to change the channel on this whole system, and cry out for leaders who are concerned for the core of the nation’s integrity, the plight of the homeless, the families to the orphan, and the care of our elderly. Im more interested in becoming a healthy nation, than a wealthy nation.

If God is in control, and you do the right thing, you don’t even have to worry about God and Government or Separation of Church and state. When people care about the needs of others above themselves and just do the right thing; God is in that! When we reach out to care for the needs of others higher than our own, God will be there! His Spirit stands ready to draw people to Him as we model the very message He came to give us.

Some Christians might say, Its just so hard to find a middle ground for varying belief systems, its much deeper than you know. And to that I say, It’s not that hard. If you are a believer,just crack open that old Bible sitting on the shelf, read the red part, and do that! You’ll be amazed at the difference it will make in this superficial, poll sensitive, sound bite system when we can lock arms and just ‘Do what Jesus Did.’ After all, he is the most revolutionary historical figure ever to walk the planet; and oh by the way, He happened to be the source behind all of it anyway. (Colossians 1:15-20)

Andy is the President of Kanakuk Colorado. His passion in life is to teach teenagers how to think about faith in the real world. Founder of The Christian Worldview Institute, Realfaith Ministries, and author of Love This, Andy spends his free time with his wife and children in Branson Missouri.