Not too long ago, a young man from the Middle East hated Christians, like many in his community. He persecuted the church violently to advance his religion. He arranged brutal murders and approved of horrific executions. He went house to house arresting Christian men and women. He did this to end the Christian church.

His name was not Osama bin Laden, or Khalid Sheikh Muhammad, or Dzhokhar Tsarnev. He wasn’t even Muslim. He was a Jew. His name was Saul. Later, while writing most of the New Testament, he brought the Gospel to Europe and Asia.

There are about 250,000,000 Americans claiming Christianity today. I wondered last week, how many of them were praying for their enemy, and how many more were hoping for revenge – for their enemy to suffer. In this case, the enemy was a confused 19-year-old kid alone and running for his life from an entire nation.

We’ve got it pretty easy these days. If a lamb is killed on my behalf, it’s for a braised lamb filet, not the atonement of my sins. The law has been fulfilled. A new law was given, to love one another, to love your enemy, and to pray for those who persecute you. Do we fully understand that Jesus got on his knees and cleaned between Judas’ nasty toes?

Do we understand how Christians reacted when the murdering terrorist Saul came to their front door?

He was a monster. He approved and watched beheadings of innocent people. Yet after the initial fear, they fed him, baptized him, and called him brother. “Saul spent several days with the disciples in Damascus.” They housed him. Twice, they even protected him.

I was talking to a friend the other day about the hate directed towards the Boston Marathon Bomber. “Everyone is wishing terrible things on these guys, things that are equally as cruel and twisted as the bombing in the first place,” she said. “It shows that, given the right circumstances, they are just as capable of the same horrors the Boston bombers committed.”

Had they been born in a warzone, or genocide, or the children of radical Muslims, or grown up in an environment of hate, the only thing separating them from Kzhokhar Tsarnev is the right place and the right time. 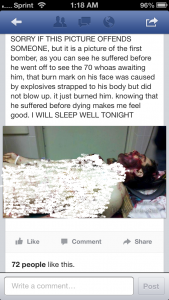 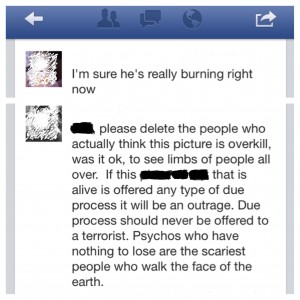 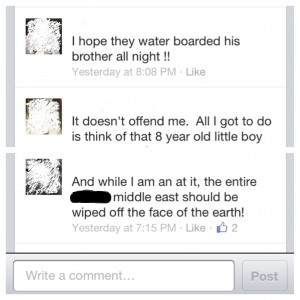 The Holocaust Architect in You
There’s a story about American hate, though no Americans are in the story. There was perhaps the greatest exhibit of hate the world has known. It’s close to American hate. It only needs the right circumstances.

The 1961 Israeli trial of Adolf Eichmann, called the architect of the Holocaust, was full of eye-witness account from holocaust survivors that had witnessed some part of Eichmann’s approval of around 5 million murders. One of the witnesses stepped into the courtroom. Upon seeing Eichmann, he fell to the floor in despair. He was so distraught he had to be carried out of the courtroom.

About twenty years ago, journalist Mike Wallace asked him why had become so upset. Fear, anxiety, anger, regret? “No,” the former witness said. “When I saw Eichmann, I realized that he was just a man. Just like me. There was really difference. I was capable of the very thing that he did. I collapsed because I saw my reflection in him.”

Wallace ended the interview by stating, “Eichmann is in all of us.”

It is the essence of grace. We have all fallen short of God’s glory. If God were to lift his hand of grace off our lives, we would be capable of Adolf Eichmann, Osama bin Laden, or Kzhokhar Tsarnev.

What do you think about the way we react to terrorism and our enemies?