According to UNICEF, the status of Guatemala’s country-wide nutrition is one of the worst in the entire Central American region. 23% of children between the ages of three and five months suffer from general malnutrition across the country. 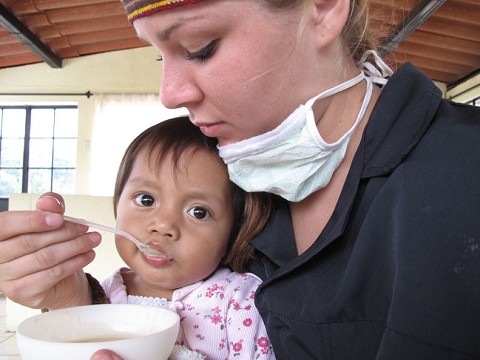 Malnourished in GuatemalaA 2008 census in the school system of Guatemala revealed that 49% of the students are chronically malnourished.  Among the indigenous population, the rate reaches a staggering 80% in some areas.

As of 2002, the infant mortality rate was at 44 per 1,000 births while the under-five mortality was 59 per 1,000 births.  In conjunction with proper nutrition, many children are affected by illnesses that could have otherwise been prevented with an adequate daily diet.

Over 50% of the deaths of young children are caused by infectious diseases such as malaria, diarrhea, pneumonia, and the measles, all diseases that can be easily fought with good nutrition and medical resources.

I spent a day with Liz at Casa Jackson to help report on her volunteering role there.  It is quite demanding with feedings every two hours and consequently many diapers to change.  The shift lasts from 10 – 5 with a short packed lunch in between.  The kids are fun to play with and love any one on one attention they can receive.

Casa Jackson is located on the outskirts of Antigua, Guatemala in the village of San Felipe de Jess, Guatemala.  Behind the protective walls of the building, is the heart of operations for the center and the place of in-house care.

The third story opens to a roof terrace where volunteers spend time interacting with the in-house patients as well as tending to a rooftop garden that is used as both an educational example to the  children and a ready supply of fresh vegetables to the center.

Children who are old enough, help water the gardens and are taught that just as plants need proper nutrition to grow, their bodies also need the same care.

Josh is a professional photographer and is currently traveling through Central America on a cross-cultural mission trip. Follow his team blog here.