While doing Mission Year in Philadelphia, we are given the opportunity to visit the city and live a day in the life of a Pauper. Instead of going to feed the hungry, we will learn what it is like to be hungry on the street. We have no money or food but are to rely on God for our daily bread. We are encouraged to spend time with the homeless and beg.

One of the most impacting experiences I have had this month and perhaps even since I have been in Philadelphia happened last weekend during P.R.O.P. Friday night we learned about homelessness in the U.S. We spent the night in a church no heat, no electricity, no bathroom. We traded our clothes for clothes found in the thrift store. We were not allowed to bring any of our belongings (only 3 things and the shoes on our feet).

That night the reality of what I was doing hit me. I leaned over to Tina, my roommate, and said, “When I became a Christian everyone thought I had gone crazy. And now, as I lay on a cold church floor with no pillow, in someone else’s clothes, in the pitch black dark, with a room full of empty church pews, I am beginning to realize they were right. If I keep this up, there is no going back to normal!” 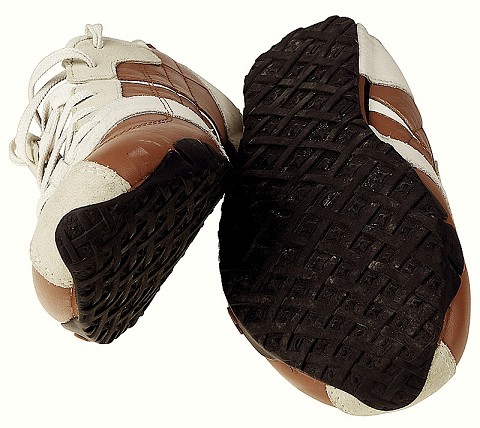 The next morning we woke up early and headed to Center City. On the ride down, I didn’t experience any overwhelming emotion. I had spent time hanging with the homeless in Saint Louis so the soon-to-be surroundings weren’t going to be completely foreign. I paired up with my friend Tera (a member of the southwest Philly team) and we were dropped off near City hall.

Side note: I have realized that I daydream a lot! I play multiple scenarios in my head for just about every event that could be (keeps me busy). In the van, I was thinking about finding a pair of boots to wear for the day. I had picked out a pair of pants that were rather short (baggy but too short) and my calves were exposed. I then thought how RIDICULOUS was such a thought because if I were to get boots, I would have to leave my shoes behind. I would never do such a thing because I love them very much!
We got out of the van and IMMEDIATELY (not even 30 seconds), a woman started to wave Tera and I over. We, being eager to meet people, went to her. She started pointing at our feet and we realized she had no shoes. Her feet were worn, blistered and dry. She started frantically talking about shoes and it became obvious that she was not all there. She had a pair of shoes in her hand, size 11 and they were too big. Tera being barely 5 feet tall, told the woman that she wears a size 6 (go figure). Then she looked at me (size 8.5), looked at my shoes, and asked me for them.

My stomach dropped. It was then I realized that I was saying goodbye to my shoes. I (or God working in me rather) took off my shoes, first the left one and then the right. They didn’t fit her; they were too small. I tried to tell her that they smelled bad and they had holes, but she didn’t care.

She handed me her size 11, no skid, old lady kicks and said “You’ll be fine in these. Have a nice day”.

My Shoes:
They are knock-off converse tennis shoes from Hong Kong that I got on my trip two summers ago. They are my traveling shoes. They smell and have holes. They are a part of who I am. So silly to say but in moving to a place where no one knows who you are, I have begun to cherish such items. These shoes are me; they are mine.

I put on the black shoes; they were too big but fit fine. I turned and walked away. I lost it. It is silly they were only a pair of shoes but I cried anyway. I knew that I could easily go out and buy a new pair or that if I asked, my friends and family would shower me with shoes. Still, I cried.

There is no justifying my gift either. I can’t say “Oh, these shoes will really help her feet” because they won’t they don’t fit! She will never have the same love for them as I do. At the same time I can see the big picture.

A woman asked me for something (alright, maybe demanded) and I gave to her. Is this not what I believe I should do? Is this not what I am passionate about? Giving to the poor, loving the unlovable, this is what I want and it is what I received. There is this laughable idea going around that loving your neighbor and serving the poor should be a lot of “fun.” Wrong. It is not fun, it is hard really hard. But I wouldn’t trade it for the world.

The rest of the day was full of eye-opening and heart-breaking experiences. I had the opportunity to live as a beggar for the day, asking for quarters on corners, meeting the prophets and angels that have no place to lay their head. It was quite the day downtown.

Lindsey is a woman who is learning how to love… for today. If you would like to support her in her adventures in Philadelphia, please visit her blog.