Poverty and suffering from a distance are tolerable. It is easy to walk away from it and believe that things are not really as bad as they look on TV. However, it is quite another when the underweight snot nosed child stares up at you, clings to your skirt and asks you for your time and attention.

I walked slowly up to a three room concrete home. A woman showed up at the door with three little children clinging to her skirt. She smiled broadly, hugged me and welcomed me into her home. We sat in a small room where pictures on walls are reminders of her deep pain of loss. Joyce is an Acholi from Northern Uganda. She grew up in a war zone, learning early how to run from the fighting and where the best places to hide were. 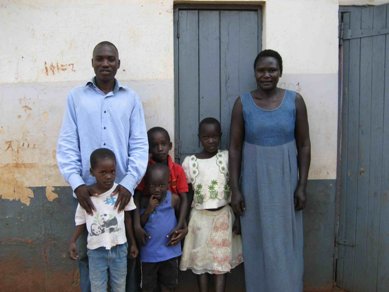 One day, she heard the familiar sounds of bullets and soldiers, so she ran to hide. After the violence was over, she returned home to find her parents in a pool of their own blood. She was a terrified fifteen year-old, but she pulled their bodies from the open space and prepared them for burial. After their death, she stayed with some of her relatives until she got married. One day soldiers killed her husband, forcing her to leave the northern part of Uganda with her small daughter.

Then, just last year, her only daughter was killed in a traffic accident in Kampala. As if that was not enough, her remaining siblings have all died due to war and AIDS, so she is now caring for fifteen of her siblings children. I am not sure even how fifteen children fit into those three rooms.

As I was getting up to leave she grabbed my hands and began to cry, Im alone. Everyone in my family is dead and I am the only one remaining. Why? Why did I live? I reached my arms around her and then I looked her in the eye and said, I see you. I hear you. I see the pain on your face, but I dont know why God allows some to die while others live. Please know that I will not forget you and neither will the people who hear about you. We prayed and asked God to intervene in her life and to provide for her children. God seemed to be crying with us. He was present. Then we talked about the new land that is coming and the people in America who have decided to support her and the other widows. Slowly, a small bit of hope began to spread across her face.

Joyce asked me to visit her friend. She told me that this woman was really suffering. I was still trying to take in the great sense of loss I felt from her, so I wasnt sure what she meant by a woman who is really suffering. Her friend was also Acholi and had come south after soldiers killed her husband. Some of her children have now died and she is caring for six of her grandchildren. As we came to her dwelling, I suddenly understood Joyces concern.

This elderly woman and her children were living in an old bathhouse. It is a small structure originally intended for people to use for bathing and it had fallen into disrepair, as it had not been used for many years. It smelled moldy and musty. It was very dark and dank inside and not fit for a goat, let alone a woman and her six children. They have no furniture and lie on the floor to sleep. They must use a neighbors outhouse. It has no house number, as it is slated to be condemned. It was never intended to be used as a home. It was so difficult not to just break down and cry. I wanted to scream and get angry at the injustice of it all. How can this be happening? All I could do was hold her and pray. There was more righteous anger in that room than just mine. The Holy Spirit seemed to be present and his righteous anger over this injustice seemed to dwarf my own. I felt that divine presence so clearly; I almost thought it might become visible. 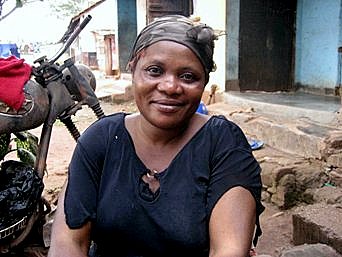 I spent seven hours going from house to house, hearing one story of loss after another. experiencing Gods presence as I prayed with each widow. I held povertys hand and looked suffering in the eye. I embraced them and was shocked to find the God of the universe there. It seems he dwells there.

God loves these women, and he will not rest until his followers take notice and do something about it. Pray, but do not forget to act. Over the last few weeks, some people from the United States have listened to Gods love for the widows and decided to take action.

They have sent money for these widows to purchase a land of their own where they can build new homes for themselves. They have begun to partner with these women to meet their needs. We are a new generation of Christ-followers that know the beauty of embracing the poor. Next time you see poverty, whether from a distance or clinging to your skirt, stay there in that moment. Know them, pray for them and do something about it.

Sing to God, sing praise to his name, extol him who rides on the cloudshis name is the Lordand rejoice before him. A father to the fatherless, a defender of widows, is God in his holy dwelling. -Psalm 68:4-5

Kari Miller is a 4th grade teacher who is passionate about loving Jesus and loving others. She longs to inspire others to love the least, the lost and the left out.

Kari is trying to raise $13,000 dollars to purchase land for 100 widows and their children. This is a major undertaking, so your help in spreading the word would be greatly appreciated. To make a donation, make out a check to “Christ Presbyterian Church” (or CPC). Put “Cornerstone Widows Ministry” in the memo section and mail to: