Red Letters begins not with startling statistics or an alarming call to action, but with a simple story about a teenager named Kirill who lived on the streets of Moscow.

Weve all been there before, trying to assuage our feelings of guilt with justifications or avoiding eye contact or even crossing the street. Tom did what many of us would have done. He shook off the beggar and kept walking. I can resonate with that; its the wise thing to do.

But Tom did something different: he went back.

Living a faith that bleeds is the tagline for this book about justice, hope, and change. It begins with a story about a man who saw his Savior on the street.

Tom lives his life by the principle that Jesus is everywhere and often seen in the least of these described in Matthew 25. When he went back, his faith started to bleed.

In the first few chapters of the book, he discusses the Gospels essencethat it is something to be lived and not just discussedand the problem of global poverty. As little Christs (a term borrowed from C.S. Lewis), we have a responsibility to do something about suffering and injustice in the world.

He goes on to discuss the AIDS crisis, the dying continent of Africaparticularly Swaziland, which has the highest rate of HIV in the world and will actually go into extinction in 50 years if nothing changesand his bleeding heart for the forgotten and forsaken.

The statistics do come, and he doesnt leave the reader with a lot of excuses for inaction. Effecting change is not difficult or even all that costly; it just requires a willingness, a faith that bleeds.

The latter chapters call the reader to action, but unlike many books of this tenor, they dont abandon you there. Tom gives you some potential routes to pursue. He invites you to join his fivefor50 campaign, go on a mission trip, and to raise money and awareness. There’s an appendix at the end of the book that lists organizations and websites to help you get involved.

My only disappointment was that there were not more stories. My favorite chapter, Snapshots of Hope, tells of African babies rescued from abandonment, Russian orphans turned into leaders, and how those who cared for them were radically changed. 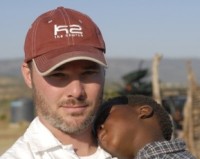 Red Letters isnt about social action. Its about Jesusabout finding him in the least-likely of places and our commitment to meet him there.

Ive discovered a new way to live. Every morning when I get out of bed, I look for Jesus. No, not because Ive misplaced Him. And Im not talking about a feeling I get during prayer, or revelation that comes to me while reading Scripture. Im talking about finding Jesus in the eyes of real people. In the eyes of the poor, the handicapped, the oppressed, the orphan, the homeless, the AIDS victimthe abandoned and the forgotten.
(Tom Davis, Red Letters, p. 15).
Rating: 3.5/5
Order Red Letters: Living a Faith that Bleeds (Amazon.com).

About the author: Tom Davis is the President of Children’s Hopechest , a child sponsorship organization bringing God’s hope and love to orphans around the world.

We also recommend that you check out Tom’s blog and watch this video for more on CHC and their work with orphans.

Jeff Goins is editor-in-chief of Wrecked and works with The World Race, an eleven-month pilgrimage where twenty-somethings find the heart of God amongst the poorest of the poor. He once attempted to get in the Guinness Book of World Records for “Longest Rubber Band Fling on a Sidewalk.” He’s still waiting to hear from them.