On our first day of ministry we ended up at a pretty big park on the other side of the city and came across this group of about 10 street kids. These kids weren’t technically homeless, but they had chosen to leave their homes and live together on the streets and in the park because their home lives were so bad. They had become a little family of their own. They survived mostly by begging off of tourists, and mentally coped with the hopelessness of their situation by huffing wood glue from plastic grocery bags. They told us it was for their lifefor their health. They had clearly lost hope that life could ever be anything more than suffering from day to day, trying to dull the pain.

We got to know a couple of their stories. There was only one girl in the group. Her name is Pado, she’s eighteen years old and she told me privately that she’s two months pregnant. None of her friends knew, and she asked me to please not say anything to them about it. I could tell she was scared and didn’t know what to do. We heard many other stories of family abuse, abandonment, and violence. The youngest boy, Frandiso, was nearly out of control. He told us he was thirteen. He was extremely high from the glue, was smoking cigarettes, and getting really violent with a couple of the older boys. Another guy, Sebastian, is twenty-four and has two children. They live with their mother about thirty minutes away and he left because they don’t get along. Esteban was probably the one we established the strongest connection with. He was seventeen and had left home because his family was very abusive. He still has two little sisters who live at home that he’s worried about. He goes back and visits them once a week. 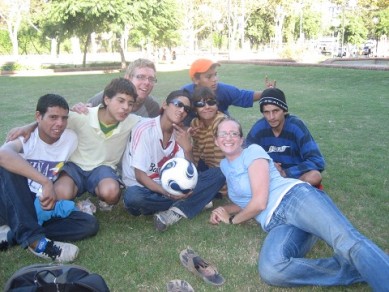 It was such a diverse group, each with their own story of how they ended up on the streets; but they all had one thing in common. They were trying to escape. We stayed there for about an hour just talking and hanging out. Jon bought them all lunch, but when we left we both had the strong desire to do more for them than just give them food for day. We wanted to give them hope. We knew we wanted to do something for them while we were there, but we only had four days. We wanted to give them something more permanent that would still be there when we left.

The next day we set out to find a church that might be able to help. It was an all day ordeal, but we eventually hooked up with a church that not only has a Social Action Group that provides clothes and food for those who need it, but the church also has a youth group type meeting every Sunday afternoon that has music, food, and soccer to draw in kids like the ones we met. They share the gospel, listen to them, talk to them, and do everything they can to give them hope. We were able to return to the park and told the kids about the church. They sounded somewhat interested, and while I have no idea if they’ll actually go, I felt better knowing that there is a place out there if they need it.

We were able to pray with them that day as well. It was a very good day, and after we left, we realized that there was one material need we could meet that we knew would mean the world to them. Jon and I decided to buy them a soccer ball. I was so excited to give it to them the next day. The boys actually met us across the street and were yelling “AMIGOS!” from nearly a block away. It was fun seeing the way friendships had developed in just three short days with our very minimal Spanish. When I gave them the soccer ball they literally freaked out! Estevan immediately claimed that he was the most responsible and wanted to be in charge of taking care of it. It was so fun to see them running around like little kids on Christmas morning. A soccer game broke out instantly using backpacks and trees for goal posts.

I know it’s not a permanent solution, but it did get them to put down their bags of glue for a few minutes and will hopefully help keep them out of trouble. When their game finally ended we all sat down and Jon and I were able to tell them why we were in Buenos Aires and why we wanted to spend our time in the park with them. Jon said (and I attempted to translate) “We know our lives are very different. We don’t have a clue what your lives are really like, and we can’t pretend to be able to understand the struggles you go though every single day. But we do want to tell you guys that there is hope. Jesus Christ gives hope when things seem hopeless. We are here in Buenos Aires to share the love and hope that Jesus has to offer. Jesus loves you guys, and we hope that in the few days that we’ve spent with you, you’ve been able to see the love of Jesus through us. Jesus isn’t about religion or rules or a church building. He loves us and wants to have a relationship with us.” They seemed surprisingly receptive and actually listened to everything we had to say. Where it goes from here I will probably never know.

After a multitude of hugs and kisses we finally had to leave. It was really sad to think that we will most likely never see those kids again, yet I was comforted by knowing that we did everything we were supposed to do. I know God is in control, and I trust that He will take care of them now that we’re gone.

God’s will for me in Argentina? I think I found it.

Briellyn Widbin of Wever, Iowa, is currently back-packing the globe. You can follow her journey here.