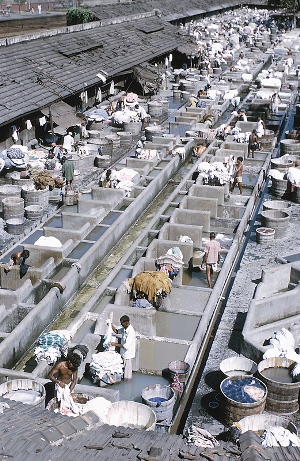 The first ministry we plugged into was working in Mother Teresa homes. I signed up for Kalighat, or Nirmal Hriday, which means Immaculate Heart. This was Mother Teresas first home: a home for the dying and the destitute.

There were many volunteers when I began. Many of them helped me learn my way around. They taught me what to do and what not to do. More importantly, I learned what had to be done.

I watched and learned how much of love is made of action. Love is made of humility and servanthood. Love is giving something of yourself and not needing or expecting anything in return. I would learn this love over the next four months.

On the days I took buses to Kalighat, I knew that I would be changed somehow. I would see something that would knock the breath out of me.

We did things from bathing, washing clothes, feeding, and massaging. Of course, you do these things Momma T stylewith great love.

Volunteers would bring in sisters and brothers left on the street or at the train station by taxi to Kalighat. There are many stories I could share of the people I was able to love on, or at least, what I knew of loving.

One of my jobs was to distribute medicine among the men. It is not a hospital, so they had little medication to keep people alive, but it did comfort many of them. I sat by one man who was near the front entrance.

He finally allowed me to pour cough syrup into his mouth. He coughed some up, but swallowed most of it down. I poured some water into his mouth and he drank. He coughed again. I handed him his vitamins and pain medicine as he swallowed them with ease. I gave him another sip of water.

He then looked up at me with a small, gentle smile. As he started to lower his head, he began to weep. It was a cry that had known such great pain and hopelessness. He fell into my lap and hugged my waist. He continued to weep. Tears began to well in my eyes as I sat and rubbed his back. I didnt know what to do, so I did what I thought would help. I came back a few days later, and he was gone.

You never expect things as this when you wake up in the morning, but I learned to do so. Day after day my heart began to beat with nervous anticipation of what I might see.

I sometimes forget the weight of these stories. My transition back into the States was that of happiness, exhaustion and melancholy. We use the term bittersweet for things as this. Bittersweet is a taste many of us have come to know. I have tasted and seen the things humanity has to offer. My cup was full and often bitter, but many times tasted sweet. I was alive in the City of Joy.

I said goodbye to Momma T on a beautiful Thursday evening. The Mother House was quiet, and a few sisters were there praying the rosary. I sat and stared at her tomb. A few candles and a message spelled with bright orange and red flowers that said, Love until it hurts.

I stood up and grabbed my bag. I walked over and laid my forehead on her tomb, and said a small prayer. I whispered a thank you, gave a kiss, and walked away with a beautiful gift: hope.
If you liked this article, check out:

Josh Casper is a student at the University of Southern Mississippi who participates in various church ministries and community projects. Josh is currently majoring in Psychology and hopes to someday use it in counseling.

For more information on the kind of work Josh did in Calcutta, check out: Word Made Flesh