Every now and then I think of what it would be like to be at war. I imagine myself running through forest and brush, carrying a guy on my shoulder to safety. Yelling and screaming, bullets whizzing by my head.

I guess it’s the macho side of guys that makes us want to be heroes in this kind of setting. I won’t lie, I would want the glory for myself. I would want to bask in it. Have a medal of honor pinned to my uniform and be placed on a pedestal for bravery. Seriously, who wouldn’t want that? 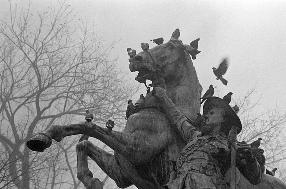 All of this sounds well and good by earthly standards. Men who seek glory for their own. Literature and films are filled with with these stories. Gladiators… warriors… soldiers.

Well, I want to tell you about a warrior that I met who does not seek his own glory. This warrior needs no earthly medals, he needs no medal of honor. He needs our prayers.

For his safety, I will only refer to him as Pastor J. Pastor J has been serving in an area of the Philippines that has experienced political unrest since the elections for mayor last spring. There has been a small group of rebels who have struck fear into the community since these elections.

Unhappy with the selection, they have killed some villagers. It is no longer safe to be on the streets after 6pm. They have security checks along the road in the evening. This area is dark. And Pastor J is in the middle of it. The frightening thing is that no one knows “who” these rebels are. They could be a next-door neighbor.

When we had the chance to spend time with Pastor J, we had no idea that all of this was occurring. He informed me on the second day that we were with him. He said that he and his wife have been called to this area. They desperately want to see these people come to Christ.

He stated that he has been fearful of sharing the gospel. Who wouldn’t? The difference is that he is staying. He is putting his life on the line to serve the Lord. Warrior? You bet.

Pastor J simply said, “pray for courage for me and my wife to share the gospel. I do not want to be afraid.”

Although, Pastor J won’t receive medals on this earth for bravery. Although he barely receives any recognition aside from those who know him and who share his story, the victory is his.

And I do know this…

Please pray for boldness for Pastor J and his wife. Pray for diligence in sharing the gospel. And pray for the people in this area. Pray for other pastors all over the world who face the reality of this kind of war every day.
If you liked this article, check out: Biking Evangelist: What a real man looks like

Aaron Bruner is a 22-year-old from Kennesaw, Georgia and is in the Philippines right now with the World Race, a year-long pilgrimage for twenty-somethings. He graduated from Kennesaw State University with a degree in Pre-med and Spanish.