Today, western culture disgusted me. I went to Tysons Corners, an upscale mall in Washington D.C. With limited time given to each person to live out this life and limited resources to use to the best of our ability western civilization created the MALL – the ultimate trap for us to waste our precious time and resources. 200 or more shops designed to feed the lust of the eyes and the pride of life. 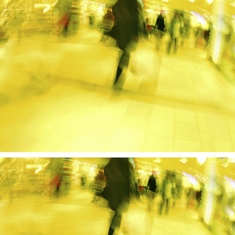 With my family, I strolled through the mall. Each shop offers something different and unique to attract customers and my eyes were draw to the different window displays. I have been in so many malls, in America and even in Kenya, but today was different.

I found that I could walk in a store and wonder what the point was. I would see something fashionable and start wondering if it would look good. A few minutes later, I walk out of the shop frustrated.

Finally, I gave up. I sat on a bench and watched people walk through the mall. I wondered how they could endure living this lifestyle. I was self-righteous and condemning.

God caught my attention later as we sat at the food court eating that the vast majority of the people sitting around me enjoying their “Westernization” with its fancy cars, suits and yes malls, were just if not more hopeless than the poorest person is the slums of Kibera.

Kibera is one of the largest slums in the world. It is full of the poorest of the poor. Three or more people live in 10 x 10 rooms. If they have a little extra money, they might have a 13-inch TV. Many though do not have enough money for three meals a day. Restaurants are small mud or tin shacks and so are all the shops. Life is hopeless.

The men in the mall are hopeless because their lives are cluttered with their material possessions until the inner spiritual voice is so muffled it no longer can to be heard. The man in Kibera is hopeless because his poverty is so great it does not seem even God can overcome his miserable existence. Who is more important – the person drowning in his wealth or the one starved by his poverty? In God’s eyes, I would imagine they are equally important.

Sarah Clark has spent the last three years in Kenya with her parents. She is an amatuer journalist who desires to tell the stories of the helpless and hopeless around the world. She is currently traveling around the states with her parents and hopes to join the World Race next year.