July 4th, 2006 the Lord demonstrated His freedom in a way that ruined my world. I was leading a team of high school and college aged students in inner city Philadelphia on a short-term mission trip. This particular morning I was busy trying to sort out last minute details for our trip to center city. 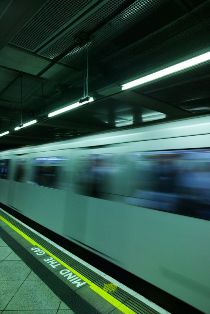 As I went to get tokens for the train, I heard a sort of grunting, moaning sound behind me. I turned to see a man with long gray hair and a bushy beard. He was propped up against his shopping cart, trying desperately to get me to pay attention to the noises he was making. A few moments and lots of hand motions later, I was able to figure out that he needed a sandwich. While getting the sandwich, a clerk told me that the man’s name was Steve.

When I returned with the sandwich, I said the only thing I knew to say, “Steve, do you know how much the Lord loves you? He replied with a series of motions and some sounds that communicated to me that he felt like he had done too much for the Lord to still love him.

I told him how the Lord’s love covers our sins and asked him why he didn’t feel any of that love. He then told me how no one ever listened to him or could understand what he was saying. But by the power of the Lord those sounds were familiar to me. The past year I have spent my days with a dear friend diagnosed with ALS whose speech sounds almost identical to Steve’s.

As I understood Steve, tears came to his eyes, and I began to grasp how the Lord was redeeming the suffering of my friend for His glory! How marvelous are the works of the Lord?! Steve told me he was hot and needed a haircut and a shave. I told him I’d be back in the morning at nine.

The next morning members of my team and I found Steve on the crate where he sleeps. Steve explained to us that he couldn’t get his haircut until he bathed and had some fresh clothes. Steve’s pants and socks were covered in his waste. We went and got him clothes from the thrift store up the road and began to pray that the Lord would make a way for him off the streets.

When we returned, the Lord provided through a man named Mike, who’d promised Steve that when he got out of rehab, he’d come get Steve and get him help. Well, Mike kept his promise and came just as we were crying out to the Lord! After hours of negotiation and explanation with Steve about leaving the corner where he’d been for 16 years, we loaded Steve, Mike, and Steve’s shopping cart into our van and headed to the recovery house where Mike now lives.

As we were leaving, a cop came up to me and told me to just leave Steve alone. He said, ” He’s been like this for sixteen years and there’s no hope, lady.” I told him I wasn’t leaving him and that today he had hope.

Once at the house, Steve was overwhelmed with frustrations and confusion. It was hard for him to accept the help of others, especially a man his age like Mike. But we got Steve up the stairs and into his first bath in over 2 years!

Some more of the team returned with me a few hours later to pick up Steve for his haircut. He was sitting on the stairs in his new clothes. He literally was glowing as he asked us to smell him and look at his hands and fingernails that were now a different color. He hurried to the van. As we walked into the barbershop on Kensington Avenue, Steve saw himself in the mirrors and laughed. He then decided to go all out and shave his head and beard.

As the lady cut his hair, years of hurt and shame seemed to be replaced with a sense of pride and joy. He no longer looked like a seventy-year-old man, but more like the 46 year old that he was. Leaving the shop, he saw his reflection in a car door and started to laugh with tears running down his face. People that knew him on the street were literally screaming, “No way, Steve”!

The Lord immediately reminded me of His promise to make us a new creation, and deep in my heart I knew that He was beginning that process in Steve, a process I prayed would set Steve free from the confines of all he knew. Little did I know, the Lord was beginning that very same transformation within me.
Continued in Distressing Disguises, Pt. 2

Ally is a south Georgia native and soon to be college graduate. She is learning to be faithful in the small things as the Lord pulls back His bow, preparing to launch her onto what will undoubtedly be a crazy adventure. She love teaching Zumba and is easily excited by good deals and, even better, coffee.